In the
cause of the management of businesses, properties, financial issues/sundry
expenses, etc., the idea of stewardship comes into play. Simply put, a steward
can be understood as an employee who manages another’s property or financial affairs; one who administers anything as the agent of another or others. Put differently, a person who has charge of the household of another, directing the
servants, etc. it could also be understood in the light of a person appointed
by an organization or group to supervise the affairs of that group at
certain functions. Consequently, a faithful steward is
someone who does the best he can with his God-given talent in the light of the
above function, and thus, yields productivity. Dear friends in Christ, today, the
Lord calls us to be faithful stewards in everything we do. In the light of our
religious calling, we are God’s stewards, and that God expects faithful and
prudent stewardship from us. All the readings for today’s liturgy
pertain to the subject of faithful stewardship.
In the First Reading (AMOS 8:4-7), we hear the 8TH
century B.C Prophet (Amos) admonishing each and every one of us to practice
justice and mercy in all spheres of life as God’s faithful stewards, and thus,
be faithful to the covenant with God. The Prophet Amos was the first of the “writing
prophets” during the 38-year
span when Uzziah was king of Judah (781-743 BC). He lived through
the harrowing moments of his time. When it comes to the lack of justice, he was
able to challenge the situation tremendously. In his time, the system was marked
by corruption, exploitation of man by man etc. He engaged in the
“fight” for a more just, supportive and a corruption free society. Amos
was the cry of the peasant population exploited by the system. Hence, the radical
prophet denounces the abuse of God in religion to rob the people. For him, the
true God is the one who hears the cry of the oppressed and liberates them from
their oppression by giving them a more just society. I dare to say that the understanding
of Amos would help us to live and stand by the truth as God’s faithful stewards
in the face of the present religious and societal corruption of our time.
Similarly,
the Second Reading (1Tm 2:1-8)
exposes Paul’s instructions to the first-century
Judeo-Christians (and to us today) to become true stewards of the Gospel of
Jesus, the only mediator between God and man, by preaching the “Good News” to
the pagans and including them in intercessory prayers. 1Timothy is classified among the Pastoral Letters (along
with 2 Timothy and Titus); it was written towards the end of the first century (after
the death of Paul) by Paul’s disciple who was familiar with Paul’s teachings
and concerns. In today’s passage, the disciple, (using the name of Paul)
reminds young Bishop Timothy and his congregation that God’s
concern extends to all people, not just themselves. In the passage, he
insists again that he has been called to take the Gospel to all peoples. He
requests prayers for civil rulers and those in authorities, so that all people
may live a peaceable life and come to salvation through the one mediator,
Christ Jesus. We see a reflection of this teaching in our present day “Prayer
of the Faithful”, which should embrace the needs of the whole world, not just
those of the Church and religious issues. 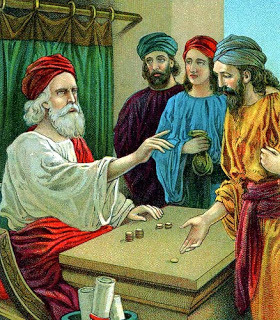 The Gospel Reading
(Luke 16:1-13) brings to limelight, a practical dimension of our calling as
faithful stewards of Christ. Put differently, in today’s Gospel, Christ tells
us a parable about the crooked but
resourceful manager and challenges us to use our blessings, time, talents,
health and wealth etc. wisely and justly so that they will serve for our
good in eternity. The parable of the crooked steward or dishonest
manager has shocked some people for centuries. St. Augustine said, “I can’t
believe that this story came from the lips of our Lord.” Jesus tells
a paradoxical story about the steward (manager), of the estate of a
rich absentee landlord. The steward was an out-and-out rascal. But his
boss praised him for his rascality because he acted with foresight. Facing
the return of his master and an audit of his accounts, the steward cleverly
converted the debtors of his master into his own debtors.  He bought
“friends” with his master’s money, and used these “friends” to
secure a means of livelihood for the rapidly and certainly approaching point
when he would be dismissed (for his previous embezzlement). The parable advises
us to take inventory of the resources placed in our charge: time, talents,
opportunities, health, intelligence, education, and other advantages in a
honest way.  It also challenges us to use these resources wisely so
that they will serve for our good in eternity.
Obviously, Jesus was not praising the steward’s
dishonesty. He was praising only his shrewd resourcefulness. The parable points
out that Christians must give as much attention to things that concern their
souls as they do to the things that concern worldly matters. In other words,
our Christianity will begin to be real and effective when we spend as much time
and effort on spiritual matters as we do on worldly activities, and when the
Church uses the “worldly business sense” of good stewardship in conducting its
ministries.
Dear friends in Christ, We are all stewards of
what God has entrusted to us, so someday we will have to give Him an account of
our stewardship.  We prepare ourselves for all kinds of things, most of
which never happen.  But do we care enough for our souls to insure
ourselves against the one thing (judgment) that most certainly will happen? We
must meet God, and give an account. Thus,
the only thing that will count in our favour is the testimony of those who will
say, “Lord, when I was really in need, he gave to me, at cost to himself.
He helped me along. He showed love to me, and proved it by giving himself to
me.” This is a call to serve the needy and the poor, and not to
oppress or dupe them as opposed by the first reading. We are called to uplift
the poor and the lowly from the dust and from the dunghill, so that in the end, the Lord might be
praised, as the Psalmist of today (Ps. 131) expresses: “Praise the Lord who
lifts up the poor…”
SHALOM! 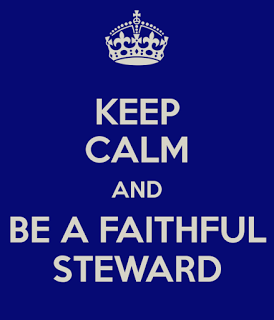