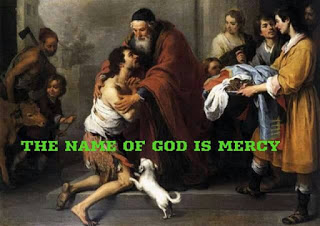 SUNDAY REFLECTION (11-09-2016): “THE NAME OF GOD IS MERCY”
Mercy
is a concept integral to the understanding of God’s dealings with humankind. In simple terms, mercy means compassion or kindly forbearance
(goodness) shown towards an offender, an enemy, or other person in one’s power. Mercy flows from God’s attribute of goodness
(or love) as grounded in His infinity and immutability. Since God is unlimited
and unchangeable, then, He must be infinitely and unchangeably good. Since
mercy flows from God’s goodness, and since God is infinite, it follows that God
is infinitely and unchangeably merciful. It is of His very nature to show mercy.
As God is a necessary Being, it follows, then, that He must of necessity be
merciful. Were God not merciful, He would not be essentially good or loving. Having said
these, it is quite apposite to note that God is not arbitrarily merciful (that is, based on random or haphazard choice or personal whim). God being merciful basically means that, when we deserve
punishment, He doesn’t punish us, and in fact blesses us instead. Mercy is the
withholding of a just condemnation. Throughout the Bible, God gives many
illustrations of His mercy. God fully demonstrates His mercy in Jesus Christ.
While we were still sinners, God sent His Son to redeem us, and continues to
show us his unfailing mercy at present. Little wonder the psalmist expresses: “if
You O Lord should mark our guilt, Lord who would survive? But with You is found
forgiveness, for this we revere You (Ps. 130:3). In verse 7 of the same psalm (130),
the psalmist expresses again: “…in the Lord there is mercy and fullness of
redemption”. This brings us to the understanding that God’s “name” is “Mercy”;
that is, He is essentially and necessarily merciful and kind.
In the
light of the foregoing, today’s readings invite us to understand this great attribute
of God, which is Mercy. In realizing that God’s “name” is “Mercy”, we are
equally called to endeavour to seek this mercy sincerely. This invitation will
lead us to believe in a loving, patient, merciful, and forgiving God. Today’s
readings remind us that God actively seeks out the lost, wants their repentance
and rejoices when the lost are found. God is eager to be merciful toward us,
not vengeful and punishing. We on our part should equally help those in
need of forgiveness to discover this attribute of God and not be like the Pharisees
of the time of Jesus who condemned sinners.
It was
the because of the fact that the Pharisees criticized Jesus for associating
with sinners that Jesus came up with some parables as seen in the Gospel
Reading (Lk 15:1-32). It is called the “Parable of the
Lost and Found,” with three illustrations: the story of the lost sheep, the
story of the lost coin and the story of the lost son (or the merciful father).
These parables remind us that we have a God who welcomes sinners and forgives
their sins whenever they return to Him with genuine contrition and resolution.
In the light of the parable of the lost son, we tend to see an elder brother
who didn’t help matters at all. He condemned the repentance of his younger wayward
brother, and in doing that, he reduced his value to that of a slave who has no
right to his father’s assets and unintentionally exalted the value of his wayward
younger brother (who repented) to that of a son. This we come to understand
when he said to his father: “Look, all these years I SLAVED for you and never for
once did I disobey your orders;
yet you never gave me even a young goat to feast
on with my friends. But when your son returns, who swallowed up your property with prostitutes,
for him you slaughter the fattened calf.” This is
simply what happens to us when we busy ourselves criticizing and condemning
sinners who are struggling to live a Christian life. In this regard, we are
called to detach from such attitude and learn from Moses in the first reading.
In the
First Reading, taken from the book of Exodus (32:7-11, 13-14), we see the
example of a man who “loves his brothers and intercedes for his people”,
imploring the mercy of God upon them. Moses had gone up to the mountain to
encounter God, the people lost patience and made for themselves a statue of a
molten calf and worshipped it. God became angry with them and told Moses of his
plan to punish the people. Moses on the other hand, implored God to have mercy
on the sinful people who had abandoned Him and turned to idol-worship,
reminding God of His promises to Abraham, Isaac and Jacob. It concludes with a
consoling passage: “So the Merciful Lord relented
in the punishment he had threatened to inflict on his people.” With certainty, this
attitude of Moses was clearly different from the Pharisees’ who were not happy
that the sinners were associating with Christ (the face of God’s Mercy); for
the Pharisees, the sinners are already condemned to God’s punishment.

Still
in the same stream of the “Mercy of God”, Paul in the Second
Reading (1Tm 1:12-17), tells
Timothy that, although he (Paul), had been the greatest of sinners as the
former persecutor of the Church, God has shown great mercy towards him. 1Timothy
is classified among the Pastoral Letters (along with 2 Timothy and Titus), it
was written towards the end of the first century by a disciple of Paul who was
familiar with his mentor’s teachings and concerns. In today’s passage, “Paul”
reminds young Bishop Timothy of how God in His mercy changed his (Paul’s) mind
and pardoned him. “Paul” acknowledges the fact that he had wandered from the
truth and rejoices that God first found him, and then commissioned him to
preach the Good News of God’s unconditional love, calling every prodigal to
return home. Therefore, “Paul” invites us to marvel at the mercy of God and to
find hope and help for dealing with our own need for conversion.
Dear
friends in Christ, if we have been in sin, God, in His infinite mercy is ready
to receive and welcome us back, no less than Jesus welcomed sinners in his
time. Let us pray, just like the psalmist of today (psalm 51), who cried
for the Mercy of God; let us arise, and return to God our merciful Father, for
God will not spurn a humbled contrite heart.
Our
today’s theme (The Name of God is Mercy) came as a result of the positive influence
Pope Francisco has on me. That was the title of his first book. In his book, Pope Francisco invites all humanity to an intimate and
personal dialogue on the subject closest to his heart—mercy—which
has long been the cornerstone of his faith and is now the central teaching of
his papacy. In this conversation with Vatican reporter Andrea Tornielli,
Pope Francisco explains—through memories from his youth and moving anecdotes
from his experiences as a pastor—why “mercy is the first attribute of God.” God
“does not want anyone to be lost. His mercy is infinitely greater than our
sins,” he writes.
Above all, as we preach about the
mercy of God, let us also ask God for the courage to extend this forgiveness to
others who have offended us. As forgiven prodigals, we must be forgiving people.
As we participate in the celebration of the Holy Mass, let us pray also for
God’s Divine mercy on all of us who have fallen away from grace.  May our
ears be opened so that we may hear that Jesus is welcoming us back home!
Sacred
Heart of Jesus; have mercy on us!
HAPPY 24TH SUNDAY IN ORDINARY TIME, YEAR C
SHALOM!