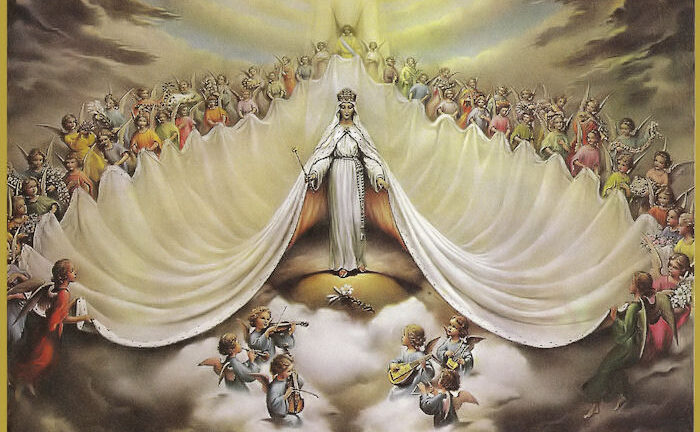 The litany of Our Lady is now in its final stretch. Having commented already on the various titles of her Motherhood, Virginity, Mercy and care towards mankind, we shall now contemplate the Blessed Virgin Mary “twelve times” with the title of “Queen.” It starts with “Queen of Angels” and ends with “Queen of Peace.” We know how the number twelve is rich in symbolism, reflecting the twelve tribes of Israel and, mainly, the twelve Apostles, on the foundation of which our Lord Jesus Christ built His Church. Today, being the eighth day of our October Devotion, we shall be reflecting on this beautiful title: “Regina Angelorum,” (Queen of Angels). What does it mean to invoke our Blessed Mother as “Queen of Angels?” 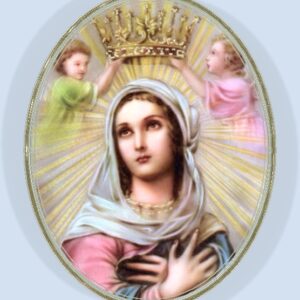 To begin with, this beautiful title of Our Lady (Queen of Angels) has Franciscan origins; nevertheless, it predates the Franciscans because of its Scriptural and Traditional backdrops. In explaining this beautiful title, we must clarify the question of Mary’s queenship. Needless to say, before contemplating her as the Queen of Angels, we would first consider her queenship. Is she really a queen? How is this possible? When we refer to Mary as the Queen, what do we mean? Does her title “Queen of heaven” diminish the “Kingship” authority of Jesus Christ? ABSOLUTELY NOT! The Queen has absolutely no authority whatsoever, except the quiet whisper in the king’s ear to influence a decision. This we see in Mary’s maternal role at the wedding feast at Cana. In the end, Mary asked them to do whatever Jesus tells them; and Jesus had to obey his mother even as he said that “his hour had not yet come”. That is a simple and humble role of the Queen, subjecting to the Will of the King. (cf. Jn 2:1-12). 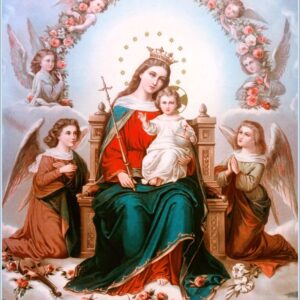 In my recent post on the “Angelic World,” I explained that when the Incarnation was placed before the Angels, Mary was at its centre. Her role in this mystery angered Lucifer. He foresaw what the Incarnation would mean: the angels serve the Virgin, they would prepare Her birth in various ways and they would announce unto Her the coming of God among men. In serving the God-man, they would serve His Mother too, and this would lead to serving humans in Christ’s Mystical Body. Lucifer clearly understood the position in which he would be placed, and renouncing his own humiliation, he would not bow down to the Queen of Angels. Heaven was divided into two camps, those who would serve God’s plan, and therefore, the Queen of Heaven, and those who would not. Thus, Lucifer turned his powerful intellect away from understanding the mystery of God’s Incarnation and tried to convince the whole heavenly host to align with his opinion. The reaction was as swift as the rebellious proposal, when St. Michael, understanding that the Mystery of the Incarnation surpassed the highest angelic intelligence, rose up in stiff resistance uttering that great battle-cry: “Who is like God!” In the end, Lucifer and the angels he seduced (one-third of them – Rev. 12:4) were expelled from the second heaven, while the good ones entered into the third heaven (empyrean) to behold the beatific vision of God (read up my post on the heavenly war in: https://www.chinakasreflections.com/feast-of-the-archangels-topic-the-angelic-world-the-expulsion-of-lucifer-from-heaven-and-how-michael-became-the-prince-of-the-heavenly-host/). 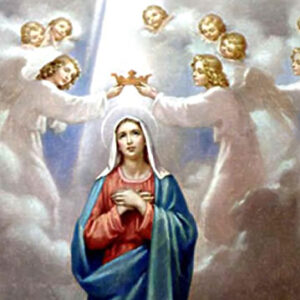 Therefore, when it was time for the incarnation, the angel Gabriel gives us a clue to the queenship of Mary when he said to her: “chaire kecharitomene” (from the original Greek text of the New Testament – Lk. 1:28), meaning “HAIL, full of Grace”. The word “HAIL” was exclusively used to address people of royal backdrop, that is Kings, Queens etc (in those days). In this context, God, speaking through the angel honoured Mary by addressing her as a queen. In addition, when explaining the mystery of the Incarnation, the angel expresses: “Look! You are to conceive in your womb and bear a son, and you must name him Jesus. He will be great and will be called Son of the Most High. The Lord God will give him the throne of his ancestor David; he will rule over the House of Jacob forever and his reign will have no end.” Now, if the Son born to her would be given the throne of his ancestor David, and would rule forever; it could be said that the Blessed Virgin Mary came to understand her position as the Queen, the Mother of the King (Queen Mother). Also, if “for in Him were created all things in heaven and on earth, visible and invisible, whether Thrones or Dominations, or Principalities or Powers: all things were created through Him and for Him” (Col. 1:16). Then, Christ could be said to be both the King of the angels and everything in Heaven and earth, while His Blessed Mother and Queen would, therefore, be also the Queen of Angels, and in fact, Queen of Heaven and earth. 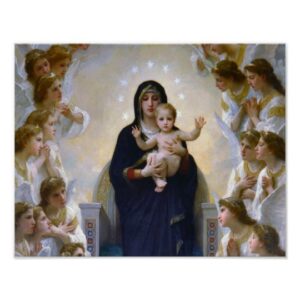 The Blessed Virgin Mary was made the queen of all creatures because she was made the Mother of the Creator and King, our Lord Jesus Christ.” She is the Queen of Angels, because, as she is elevated far above them in dignity and glory, they look up to her with the reverence, being superior to them. Put differently, She, who by (human) nature is inferior to them, is in dignity superior to them, due to the fact that She has the supreme dignity—that of Mother of God. When speaking about the Kingdom of God, the Psalmist also speaks of the Queen: “Your throne, O God, shall endure forever. A sceptre of justice is the sceptre of your kingdom. Your love is for justice; your hatred for evil…From the ivory palace, you are greeted with music, the daughters of kings are among your loved ones. On your right stands the Queen in gold of Ophir” (Ps. 45:9). Who else could this queen be other than the Mother of the King of kings?

There is a beautiful story about the Regina Coeli. “In the year 596, at Easter Time, a terrible pestilence was raging in Rome. Pope St. Gregory urged the people to do penance and arranged for a procession. At dawn he went to the Church of “Ara Coeli,” and taking a picture of Our Lady, believed to have been painted by St. Luke, he led the procession to St. Peter’s followed by the clergy and a great crowd. When the procession was passing the tomb of Hadrian he heard heavenly voices singing the “Regina Coeli…,” and he added to their praises the invocation, “Ora pro nobis, Alleluia!”At that, an Angel was seen putting his sword back into its scabbard. The plague had ceased. Thenceforth the Castle of Hadrian was known as the Castle of the Holy Angel (Castel Sant’Angelo), and the Image of Our Lady became known as the Salvation of the Roman People (Salus Populi Romani). Being Queen of Heaven, the first title of Her royal prerogatives is “Queen of Angels,” an astounding title as we consider the unspeakable beauty and majesty of these sublime creations of God.” (https://www.salvemariaregina.info/SalveMariaRegina/SMR-174/QueenAngels.htm) 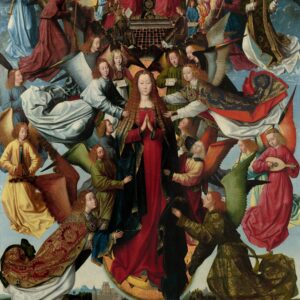 Therefore, exercising her royalty closely linked to the universal Lordship of her Son, Mary is the Queen of heaven and earth. Thus, when invoking Mary as Queen of Angels, we recognize that she is also queen in the sphere of the Triumphant Church, and above all saints as well. In some way, this invocation reminds us of the dogma of the Assumption. Mary’s title as “Queen of angels” should remind us, that we also are destined to enjoy the society of angels, and with them admire the wonders of God’s power in this heavenly queen. We should remember that God has deputed some of these heavenly spirits to be the guardians of men on earth, according to that of the Psalmist: “He has given His angels charge of you, lest you strike your foot against a stone” (Ps. 91:11-12); also the words of Christ: “Their angels in heaven always see the face of my Father who is in heaven” (Mat. 18:10).

Above all, dear friends in Christ, the “queenship” title of the Blessed Virgin Mary expresses the thought of her special privilege of leading us to Son and King – Christ our Lord; and telling us: “Do whatever He tells you” (cf. Jn 2:1-12). Hence, in seeking a perfect way to do the will of Jesus the King, we must go to the Queen that she might school us with tenderness and love.

O God, you raised the dignity of the Blessed Virgin Mary above the choirs of Angels because of her great love and readiness to carry out your will. Grant, we pray, that invoking her as the “Queen of Angels,” we may continually enjoy the protection and support of the angelic beings through her intercession, and at death’s hour, be led into the heavenly paradise where we shall behold your face in the company of the angels, and their Queen. We ask this through Christ our Lord. Amen. 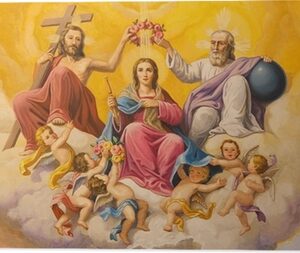 Oh “Queen of Angels” (Regina Angelorum) pray for us that we may be made worthy of the promises of Christ. Amen.

Amen Now, if the Son born to her would be given the throne of his ancestor David, and would rule forever; it could be said that the Blessed Virgin Mary came to understand her position as the Queen, the Mother of the King (Queen Mother). Also, if “for in Him were created all things in heaven and on earth, visible and invisible, whether Thrones or Dominations, or Principalities or Powers: all things were created through Him and for Him” (Col. 1:16). Then, Christ could be said to be both the King of the angels and everything in Heaven and earth,… Read more »