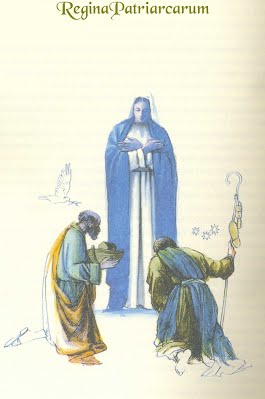 The second of the twelve invocations of Mary as “Queen” praises her as “Queen of the Patriarchs” (Latin, Regina Patriarcharum). It appears that many Catholics invoke the Blessed Virgin Mary as “Queen of Patriarchs” without taking time to contemplate deeply about it, or probably because it makes little or no meaning to them. Nevertheless, a good understanding of this title would bring one to the realization that it is one of the most pleasing of all the titles in the litany. For it glorifies Her as Queen of Her own chosen people, the culmination of that long line of believing men and women who through moments of sorrows and joy, thick and thin, challenges and happiness, remained steadfast to the promise of God. Having said this, how could we understand the Blessed Virgin Mary as “Queen of Patriarchs?” Today, being the ninth day of our October Devotion, we shall quickly reflect on this title.

First, etymologically, the term “Patriarch” is derived from Greek “πατριάρχης” (patriarchēs), a compound word of “πατριά” (patria), meaning “family”, and “ἄρχειν” (archein), meaning “to rule.” From this etymological derivation, we can understand a Patriarch as a “chief or father or ruler of a family.” Thus, when it comes to our bloodline, patriarchs are simply our forefathers, whom we are called to honour and respect. However, scripturally, it is applied to the head or prince of a tribe; those notable characters whose lives are recorded in the Bible before Moses; so that the great Patriarchs are Abraham, Isaac and Jacob. The twelve sons of Jacob also are called patriarchs (cf. Acts 7: 8:9) and even posterior to Moses, King David is called a patriarch (Acts 2:29). The ancient Israelites respected Abraham, Isaac, and Jacob and their forefathers and remembered them as national heroes. Through them, God revealed that the Israelites were His chosen people, through whom the Messiah would enter the world. Now, how could a woman of Nazareth be said to be the queen of these noble and powerful ancestors of old where great rulers?

From the beginning, the figure of the Blessed Virgin Mary was already in the mind of God, an idea which predates the biblical Patriarchs. This way, Mary was outlined as a harbinger of hope after the rebellion of the parents. Needless to say, in view of the destruction of God’s plan and its friendly relationship with mankind by our first parents, God Himself announces that he will annul the disaster created by the serpent through the advent of another woman who would give birth and collaborate with the One who will crush the head of the serpent (cf. Gn, 3:15).

No doubts, Mary was a descendent of the patriarchs by faith and by blood. But since the Messiah entered the world through her cooperation, she proved herself to be even more important than these patriarchs. Just as Abraham was the father of faith in the Old Testament, so Mary, a ‘sort of patriarch’ (matriarch) in her own right, became the mother of faith for all under the New Covenant – “all generation shall call me blessed” (Luke 1:48). Little wonder, the Evangelists are careful to trace back the line of this Mother of God to Abraham and the promises given him for the blessing of Israel, as Mary said in the Magnificat, and as Zachary said in the Benedictus—”The oath which He swore to Abraham our Father.” (Luke 1:46-55; 68-79). Having this in mind, some of the evangelists connected Mary with the patriarchs by commencing their gospel with the “genealogy” because the Child born to the Blessed Virgin Mary is part of human history, a descendant of the patriarchs, One in who all the promises made to the patriarchs were fulfilled.  From the genealogy account, we see that God the Son entered human history in the flesh for the salvation of men promised to the patriarchs. The Blessed Virgin Mary is this door through which salvation entered humanity. While the patriarchs dreamed and longed for the advent of the Saviour of mankind (cf. Luke 2:29-32; Matthew 13:17); it could be said that they also dreamed of the birth of the Blessed Virgin Mary through whom the Messiah would be born (cf. Is. 7:14). Therefore, invoking the Blessed Virgin Mary as “Queen of Patriarchs,” attests to her strong role as an interpretive key to the entire Old Testament. The patriarchs must have gloried in her as their queen because she cooperated in bringing forth the long-awaited and promised Messiah.

To say that Mary is Queen of the Patriarchs illustrates continuity between the Old and the New Covenants. Patriarchs are not great parents for Jews only, but for us as well, because we recognize their importance and paternity, forming part of these people of God who were elected in Abraham; that is why St. Paul recognizes the importance of “Abraham’s faith” (cf. Rom. 4:1-17; Gal. 3:7)

Dear friends in Christ, what this beautiful title intends to teach us is that the Blessed Virgin Mary is the mother and queen of all the people of God. The Word of God that was incarnated in her womb could be compared to a stone that is thrown into the lake which produces waves that expand in circles until it reaches the lakeshore. Thus, our Lord Jesus Christ is this “touch of God” in humanity, while Mary is at the heart of this loving touch from God, for it is in her that the Eternal Word was incarnated by the Will of the Father and by the action of the Holy Spirit. This way, we can say that the Holy Trinity permeated her soul and deposited the divine plan of salvation in her flesh. 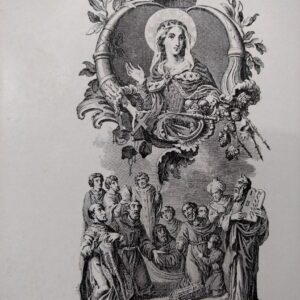 Oh “Queen of Patriarchs” (Regina Patriarcharum), pray for us that we may be made worthy of the promises of Christ. Amen.

OCTOBER DEVOTION: UNDERSTANDING THE MARIAN TITLES IN THE LITANY OF LORETO (PART 2) – DAY 20: “QUEEN OF THE FAMILY” (REGINA FAMILIAE)

Amen From the beginning, the figure of the Blessed Virgin Mary was already in the mind of God, an idea which predates the biblical Patriarchs. This way, Mary was outlined as a harbinger of hope after the rebellion of the parents. Needless to say, in view of the destruction of God’s plan and its friendly relationship with mankind by our first parents, God Himself announces that he will annul the disaster created by the serpent through the advent of another woman who would give birth and collaborate with the One who will crush the head of the serpent (cf. Gn,… Read more »

Thanks for reading, bro!
Remain blessed!