According to theologians, of all the titles in her litany, there is no title more descriptive of Mary’s loving office to men than “Morning Star” (Latin, Stella Matutina) which comes immediately after “Gate of Heaven.” Thus, today, being the third day of our devotion to Mary in this month of October, we shall contemplate this radiant title and clarify the context at which it is to be understood because Jesus also identified Himself with this glorious title – “Bright Morning Star” as seen in the book of Revelation (Rev. 22:16). As a result, the fundamentalists have always reacted repulsively against this Marian title, accusing us of giving the glory attributed to Christ to another creature. In all its complications, some sets of fundamentalists have claimed that attributing this title to the Blessed Virgin Mary indicates that she is Lucifer since Lucifer means “Morning Star.” Now, how are we to understand this title in relation to the Blessed Virgin Mary? 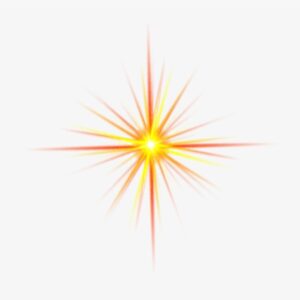 Undoubtedly, Jesus refers to Himself in the text of Revelation 22.16 as the “Radiant Morning Star.” Jesus Christ is also described as the ‘Morning Star’ in 2 Peter 1:19 (Greek, Phosphoros). This clearly points out the ‘star’ symbolism as reflected in the Old Testament on the “celestial” or heavenly nature of the coming Messiah (cf. Num. 24:17; Mal. 4:2). This expression could signify the resurrection and also the Second Coming of the righteous Messiah. Just as the “morning star” breaks forth from the darkness of night, so the Lord’s people will break out of the darkness of the grave. With regards to the meaning of this title in Latin (“Lucifer”), which was also attributed to the devil before his fall as reflected in Isaiah (Is. 14:12), it must be understood that Angels are also called “morning stars” (Job 38:6-7): “They sang for joy when God created the world.” Satan was created as the most beautiful of all God’s angelic beings (cf. Ezekiel 28:12-15). Since Satan was the most beautiful and powerful of all the angels before he sinned, it was appropriate to refer to him as a morning star. Nevertheless, the passage in Isaiah that allegorically refers to satan as a morning star or shining one is all about his fall from his position of beauty and importance. He had an exalted position but he no longer holds it. Hence, after the fall, he lost that glory and became known as the devil, satan, etc. 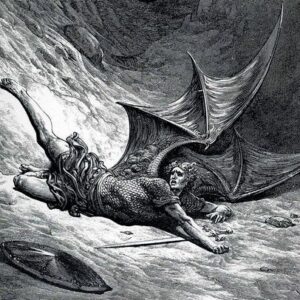 Having clarified the foregoing, we can also talk of our Lady as the “Morning Star” because she announces the rising sun, the light from above who came to visit us: Jesus of Nazareth (cf. Lk 1:78). She is the New Dawn that prays for the “day of the Lord,” because from her the Saviour was born. How can we understand this better? The order in which the morning star appears in the sky before the sun explains this reality. Just as the morning star announces the coming of the day, appearing in the sky and reflecting the light of the sun, Mary appeared on the horizon of salvation history before Christ and shows us the way to Him. She reflects the light of the Creator and Redeemer and exalts His glory. From her humble assent welcoming Jesus into her life to her faithful witness at the foot of the cross, she is a model for all believers. Her birth meant that the “Sun of Justice” would soon rise. Mary is always the announcement of the Light to come. According to Tertullian, “Adam came first and then Eve followed after she was formed from his side. So, in God’s poetic redemptive plan to reverse this and its effects, it should be only right that the new Adam comes from the new Eve. With this same rationale, it should be a woman who should usher in the man who would bring salvation.” Therefore, the coming of Mary prepares to light up the world by declaring that the day of salvation has come. It precedes the coming of Jesus who is to bring the light of redemption upon us. As a result, St. John Cardinal Newman expresses: “It is Mary’s prerogative to be the Morning Star, which heralds in the sun. She does not shine for herself, or from herself, but she is the reflection of our Redeemer, and she glorifies Him.” 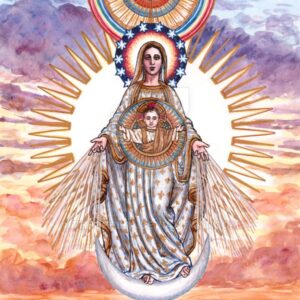 Having said this, it is important to note that the most common “Star” figure, which all the spiritual writers have used is “Star of the Sea” (Stella Maris); the guide to man who is sailing on the “sea of life.” St. Bernard, as many others, interpreted Miriam (Hebrew word for “Mary”) as meaning “Star of the Sea,” and thus explains it: “Because without loss of its own integrity, a star sends forth its rays—and so Mary brought forth Jesus. She is, therefore, that noble star risen out of Jacob, whose ray illuminates the whole earth, whose splendour both shines above and pierces the nether darkness, enlightening the earth and giving heat rather to souls than to bodies, nourishing virtues, expelling vices. Mary is the excellent, bright and wonderful Star lifted up necessarily above this great and wide ocean, shining with merits, illuminating with example. Behold the Star!” Little wonder, the Church interprets the verse in the Song of songs 6:10 (“Who is She that cometh forth as the morning rising, fair as the moon, bright as the sun…?”) as descriptive of Mary. 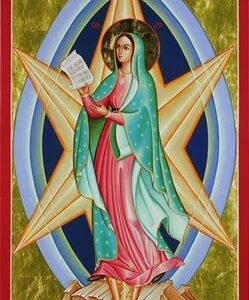 Dear friends in Christ, invoking our Blessed Mother as the “Morning Star” should serve as a reminder that God did not abandon us even after the fall. He didn’t disown us in repugnance even if original sin disfigured us so much that it seemed that we no longer look like beings created in his image and likeness. Instead, He planned our salvation and in that plan, the role of Mary was a crucial part. It was divinely preordained so that Mary had to enter into this world first so that she could bring Christ into it too. In conclusion, we unite our hearts with the “Dogmatic Constitution of the Church” (Lumen Gentium), which says: “In the interim just as the Mother of Jesus, glorified in body and soul in heaven, is the image and beginning of the Church as it is to be perfected in the world to come, so too does she shine forth on earth, until the day of the Lord shall come, as a sign of sure hope and solace to the people of God during its sojourn on earth.”(LG 68). Hence, let us continually invoke the intercession of the powerful woman that lights up the earth at dawn and shines forever in heaven.

O God, you willed that the Blessed Virgin should indicate to humanity, the first advent of your beloved Son as the “Morning Star,” shining brightly on our souls, grant we pray, that through her merits and intercessions, we may keep watch and stand ready for the second coming of Christ, and be found worthy of His Kingdom, through Christ our Lord. Amen. 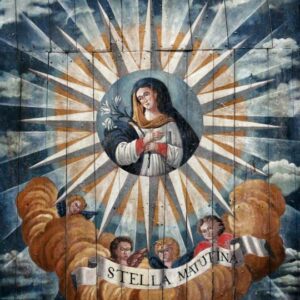 Oh “Morning Star” (Stella Matutina), pray for us that we may be made worthy of the promises of Christ. Amen.

Just as the star guided the three wise men she will guide us if only we remain focus.