OCTOBER DEVOTION: DAY 25 – SEVEN CURIOSITIES OF THE FATIMA APPARITIONS THAT EVERY CATHOLIC SHOULD KNOW 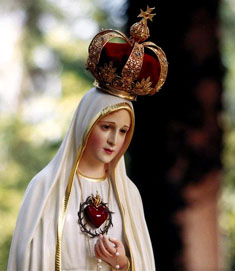 DAY 25 PRAYER INTENTION: Today, pray for the conversion of all those who are yet to know and honour Our Lady; those who blaspheme and mock her out of hatred for Catholicism; and those who have derailed from honouring her (lost their faith). May Our Lady of Fatima visit them, enlighten them, and grant them the grace to understand that she must be honoured as stated in Luke 1:48, and come to understand her place in the life of the Church since the earliest times and in the life of every Christian, to the greater glory of God. Amen (Also add your own intention…)

Now, say the 20 decades of the Rosary…

At the end of the 20 decades, say the following Prayers:

Hail, holy Queen, mother of mercy, our life, our sweetness, and our hope. To thee do we cry, poor banished children of Eve. To thee do we send up our sighs mourning and weeping in this valley of tears. Turn then, most gracious advocate, thine eyes of mercy toward us, and after this our exile show us the blessed fruit of thy womb, Jesus. O clement, O loving, O sweet Virgin Mary!
Pray for us, O Holy Mother of God, that we may be made worthy of the promises of Christ.

O God, whose only begotten Son, by His life, death, and resurrection, has purchased for us the rewards of eternal salvation. Grant, we beseech Thee, that while meditating on these mysteries of the most Holy Rosary of the Blessed Virgin Mary, we may imitate what they contain and obtain what they promise, through Christ our Lord. Amen.

God, the Father of heaven,
have mercy on us (Repeat after each invocation)

God the Son, Redeemer of the world,
God the Holy Spirit,
Holy Trinity, one God,

Lamb of God, who takes away the sins of the world,
spare us, O Lord.

Lamb of God, who takes away the sins of the world,
graciously hear us, O Lord.

Lamb of God, who takes away the sins of the world,
have mercy on us.

Pray for us, O holy Mother of God.
That we may be made worthy of the promises of Christ.

Let us pray
Grant, we beseech thee, O Lord God, that we, your servants, may enjoy perpetual health of mind and body;
and by the glorious intercession of the Blessed Mary, ever Virgin, may be delivered from present sorrow, and obtain eternal joy. Through Christ our Lord. Amen.

Remember, O most gracious Virgin Mary, that never was it known that anyone who fled to thy protection, implored thy help, or sought thine intercession was left unaided. Inspired by this confidence, I fly unto thee, O Virgin of virgins, my mother; to thee do I come, before thee I stand, sinful and sorrowful. O Mother of the Word Incarnate, despise not my petitions, but in thy mercy hear and answer me.

Prayer to Saint Joseph after the Rosary

To you, O Blessed Joseph, we come in our trials, and having asked the help of your most holy spouse, we confidently ask your patronage also. Through that sacred bond of charity which united you to the Immaculate Virgin Mother of God and through the fatherly love with which you embraced the Child Jesus, we humbly beg you to look graciously upon the beloved inheritance which Jesus Christ purchased by his blood, and to aid us in our necessities with your power and strength.

O most provident guardian of the Holy Family, defend the chosen children of Jesus Christ. Most beloved father, dispel the evil of falsehood and sin. Our most mighty protector, graciously assist us from heaven in our struggle with the powers of darkness. And just as you once saved the Child Jesus from mortal danger, so now defend God’s Holy Church from the snares of her enemies and from all adversity. Shield each one of us by your constant protection, so that, supported by your example and your help, we may be able to live a virtuous life, die a holy death, and obtain eternal happiness in heaven. Amen.

Prayer to Saint Michael the Archangel

St. Michael the Archangel, defend us in battle, be our protection against the wickedness and snares of the devil. May God rebuke him we humbly pray; and do thou, O Prince of the Heavenly host, by the power of God, cast into hell Satan and all the evil spirits who prowl about the world seeking the ruin of souls. Amen.

DAY 25 REFLECTION: SEVEN CURIOSITIES OF THE FATIMA APPARITIONS THAT EVERY CATHOLIC SHOULD KNOW

On this 25th day of our devotion, we summarily contemplate the six visits of our heavenly mother, Our Lady at Fatima, and her message. A good number of us know that the apparition of Our Lady of Fatima, approved by the Holy See, is the best known of the 20th century, particularly for the third secret that Mary revealed to the three shepherds at Cova da Iria (Portugal) and transcribed by Sister Lucia on January 3, 1944. Below, is a presentation of the seven curiosities that every Catholic should know about this apparition:

Blessing
Through the intercession of Our Lady of the Holy Rosary, may Almighty God bless + you, the Father, and the Son, and the Holy Spirit. Amen.

Great job reflecting on Day 25! Click here for Day 26 – “Is there a queen in the kingdom of heaven”

This is wonderful, thanks so much Fada for this beautiful well detailed write up of our Lady of Fatima messages. Stay blessed

Looking at the 7 key points firstly, I asked myself why nothing is said about 3rd secret, then I started to read from top to bottom and found out it was explained. If anyone didn’t read about the 3rd secret it means you didn’t read the write up. Read this rich article Patiently. Our Lady of Fatima pray for us Amen

Our Lady of Fatima! Pray for us that we may continue to spread the messages of Fatima. Amen

I pray for those who don’t acknowledge Mother Mary that they’ll come to realize Her Majestic importance in today’s world as the Mother of God and of our faith.

Oh Mother Mary, Mediatrix of all, pray for us who recourse to Thee.

Thank you for the revelations. It’s beautiful to learn about.

Educative! Thank you Padre and God bless you