OCTOBER DEVOTION: DAY 26 – IS THERE A QUEEN IN THE KINGDOM OF HEAVEN? 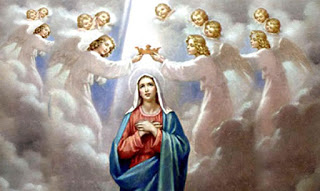 As we journey towards the end of our devotion in this month and having contemplated our Lady as a queen (under various titles) in her Litany, it becomes important to reflect on her queenship today, being the 26th day of our devotion.
Apparently, “many” tend to accuse the Catholic Church of “pagan worship” whenever She refers to Mary as the queen of heaven, owing to the claim that the title “Queen of Heaven comes from an old pagan idolatrous cult condemned in the Bible (cf. Jer. 7:18). However, this is ABSOLUTELY WRONG and has no connection with honouring the Blessed Virgin Mary as the Queen of heaven. The aim of this post, therefore, is to refute this erroneous claim, and illustrate with Biblical explanations how the term “Queen of Heaven” applies to the Blessed Virgin Mary.
By referring to the Blessed Virgin Mary as the Queen of Heaven, what do we mean? Does this belief have anything to do with the pagan worship condemned by Jeremiah? NO, ABSOLUTELY NO. This has nothing to do with that passage of the Scripture. Let me briefly explain that context. In that passage, the prophet Jeremiah talks about alien gods and condemns their worship. He says: “The children collect the wood, the fathers light the fire, the women knead the dough, to make cakes for the Queen of heaven, and to spite me, they pour libations to alien gods…” (The New Jerusalem Bible; Jer. 7:18). This contextual “queen of heaven” is referred to Ishtar (Astarte), goddess of fertility in the Mesopotamian pantheon; she was identified with the planet Venus.

The Hebrew word “shamayim” (שָׁמַיִם) is translated to mean “sky/firmament” or “heavens” in English. Many a time, when the Jews want to refer to the sky/firmament, they equally use the same word “shamayim”; although we know that the firmament and heaven are related, they don’t really mean the same thing. For instance, in some of our African Traditional worship, some deities are represented as “goddess of the sky”, “goddess of rain”, “goddess of the sea” etc. This was just the similar issue Jeremiah condemned in his time; thus, this has nothing to do with the Blessed Virgin Mary, the Queen-mother of Jesus Christ, King of kings who reigns on earth and in the Kingdom of heaven. Thus, Jeremiah condemns the adoration of the Mesopotamian goddess Astarte; she is in no way related to Mary. In fact, the goddess did not and does not exist in reality. Mary, on the other hand, is a real historical person, who is a queen by virtue of the fact that her Son (our Lord Jesus Christ) is the King.
Many fundamentalists believe that the mere fact of Jeremiah condemning the pagan worship of Ishtar (Astarte), goddess of fertility which was referred to as the queen of the sky, eliminates the possibility of Mary being the true Queen of Heaven. This simply does not follow. The existence of a counterfeit queen does not mean there can’t be an authentic one. This reasoning followed to its logical end would lead to abandoning the entire Christian Faith! Does it mean we could not call Jesus “Son of God” because Zeus (the pagan god) and Hera had Apollo as a son? Does it mean we could not have a Bible because Hinduism, Islam, and many other religions have their “holy books?” The fact that there was a false “queen of heaven/sky/firmament”, worshipped in ancient Mesopotamia does not negate the reality of the true queen in the kingdom of heaven.
.
As per offering sacrifices to the “queen of heaven”, which Jeremiah later condemns in chapter 44:17-25. The Catholic Church does not teach “offering of sacrifices” to any other being apart from God, not even to the Blessed Virgin Mary. Offering sacrifice is tantamount to the adoration that is due God alone, and this is precisely what Jeremiah was condemning. The Catholic Church does not teach—and has never taught—that we should adore Mary (see CCC 2110-2114; Lumen Gentium 66-67; CCC 971). Catholics offer sacrificial worship exclusively to God, and this is known as the Holy Mass (the true Sacrifice of the body and blood of Christ, which He commanded us to do in memory of Him. Lk. 22:19, 1Cor. 11:23-27 – St. Paul adds, whenever we do this, we are proclaiming the Lord’s death {sacrifice} until he comes again).
Having said these, another question to be addressed is: “When we refer to Mary as the Queen of Heaven what do we mean?”

1. Does her title “Queen of heaven” diminish the “Kingship” authority of Jesus Christ? ABSOLUTELY NO. The Queen has absolutely no authority whatsoever, except the quiet whisper in the king’s ear to influence a decision. This we see in Mary’s maternal role at the wedding feast at Cana. In the end, Mary asked them to do whatever Jesus tells them; and Jesus had to obey his mother even as he said that “his hour had not yet come”. That is a simple and humble role of the Queen, subjecting to the Will of the King. (cf. Jn 2:1-12).

2. The angel Gabriel at the Annunciation gives us a clue to the queenship of Mary when he said to her: “chaire kecharitomene” (from the original Greek text of the New Testament – Lk. 1:28), meaning “HAIL, full of Grace”. The word “HAIL” was exclusively used to address people of royal backdrop, that is Kings, Queens etc (in those days). In this context, God, speaking through the angel honoured Mary by addressing her as a queen.
3. The Psalmist, when speaking about the Kingdom of God, also speaks of the Queen: “Your throne, O God, shall endure forever. A sceptre of justice is the sceptre of your kingdom. Your love is for justice; your hatred for evil…From the ivory palace, you are greeted with music, the daughters of kings are among your loved ones. On your right stands the QUEEN in gold of Ophir” (garments of gold). (Ps. 45:9)
4. Also, from the book of Revelation chapter 12, we read: “A great sign appeared in heaven: a woman clothed with the sun, with the moon under her feet, and ON HER HEAD A CROWN OF TWELVE STARS. She was pregnant and was crying out in birth pangs, in the agony of giving birth. Then the dragon stood before the woman who was about to bear a child so that he might devour her child as soon as it was born. And she gave birth to a son, a male child, who is to rule all the nations with an iron rod, and the Child was taken up to God and his throne…” In as much as the identity of the “woman” is referred symbolically to a selected group of people, that is “Israel” and also the “Church” at war with the dragon; it is also referred to the person of the Blessed Virgin Mary (threefold interpretation). Notice that according to the text, the “Woman” was crowned with twelve stars, to give birth to a Son destined to rule the nations with an iron rod. It was indeed Mary that gave birth to Christ the Lord and Ruler. She is indeed the Mother of the Church – the new Israel. She received the crown of “unfading glory” when she assumed into heaven, little wonder the psalmist makes an allusion to her as the Queen – “On your right stands the Queen in garments of Gold” (Ps. 45:9). Given the qualities of Mary above, who else could the psalmist be referring to, if not in allusion to the Blessed Virgin Mary?
Therefore, today, we adore our Lord Jesus Christ, the King of Kings, who crowned his Blessed Mother Mary as the Queen of Heaven due to her contributions to our salvation history. We pray that our Blessed Mother, the Queen of Heaven would continue to exercise her queenship role by interceding for us to Christ her Son, just as she did at the wedding feast at Cana, and that, by honouring her as the Queen of heaven, we may come to a perfect and intimate friendship with Christ the King. Amen.
Through the intercession of Our Lady Queen of Heaven, may Almighty God bless + you, the Father, and the Son, and the Holy Spirit. Amen

Great job reflecting on Day 26! Click here for Day 27 – “How is Mary the Mother of God”

Thanks so much for this beautiful well thought out post. I am so blessed to be on this special platform. Please Fr Chinaka can I have a personal discussion with you.

Hail Holy Queen!!! Pray for us