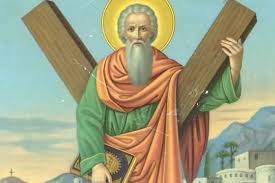 O God, come to my aid+R. O Lord, make haste to help me.V. Glory be to the Father, and to the Son, and to the Holy Spirit.R. As it was in the beginning, is now and ever shall be, world without end. Amen.

—Pause for an “Examination of Conscience”—

I BELIEVE in God, the Father Almighty, Creator of heaven and earth; and in Jesus Christ, His only Son, our Lord; Who was conceived by the Holy Ghost, born of the Virgin Mary, suffered under Pontius Pilate, was crucified, died, and was buried. He descended into hell; the third day He arose again from the dead; He ascended into heaven and sitteth at the right hand of God, the Father Almighty: from thence He shall come to judge the living and the dead. I believe in the Holy Ghost, the Holy Catholic Church, the communion of Saints, the forgiveness of sins, the resurrection of the body, and life everlasting. Amen.

O Glorious St. Andrew, you were the first to recognize and follow the Lamb of God. With your friend St. John you remained with Jesus for that first day, for your entire life, and now throughout eternity. As you led your brother, St. Peter, to Christ, and many others after him, draw us also to Him. Teach us to lead others to Christ solely out of love for Him, and dedication in His service. Help us to learn the lesson of the Cross and to carry our daily crosses without complaint so that they may carry us to Jesus. Amen. 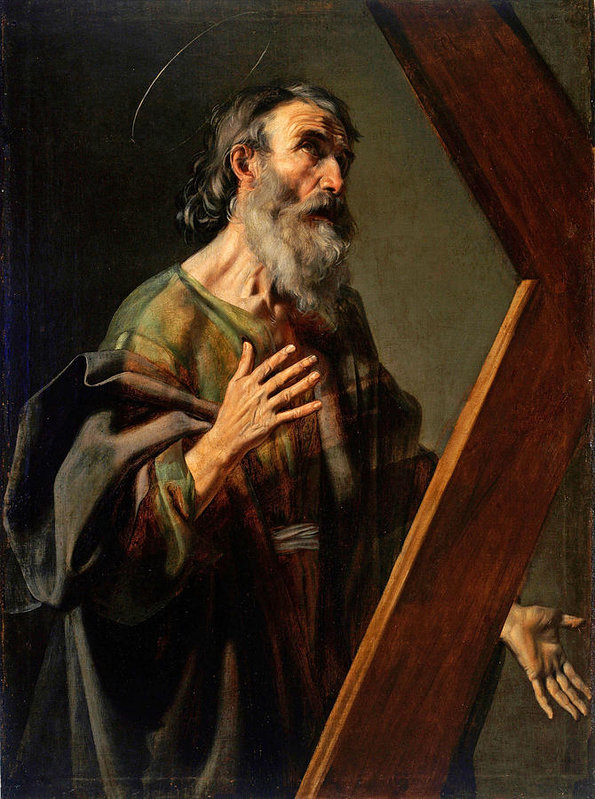 (Five things you may not know about the First Apostle)

Here are five facts about Saint Andrew and his feast so you can get to know him a little better.

1) First, but not favorite: Depending on which Gospel you are reading, St. Andrew was the first apostle called by Christ along with Saint Peter or he went seeking Jesus and after finding Him, went to get his brother Simon Peter. Peter James and John (the “inner circle” disciples) were typically with Jesus for events like the Transfiguration and in the Garden of Gethsemane but Andrew, first of the Apostles, was not.

2) Either Andrew’s parents liked Greek or we don’t know Andrew’s real name: Andrew is not a Hebrew name – it is Greek. We are never told in the Bible that Andrew had another name so it is possible that he took it as a nickname or that his parents were of Greek descent.

4) Saint Andrew was quite the traveler (before and after he died): Keep in mind that most of the apostles’ travel was done on foot or by boat. Saint Andrew, like most of the Apostles, didn’t stick around Galilee. They went all over to spread the Gospel. Saint Andrew traveled around Asia Minor, where he established the See of Constantinople. He also traveled north to Kiev, Novogrod and along the northern shore of the Black Sea. That is why he is the patron saint of Romania, Ukraine and Russia. After he was martyred in 60 AD in Patras, Greece, his body was buried in a monastery there. For a couple of hundred years his remains were undisturbed. In the early 300’s a monk named Regulus who live in Patras had a dream where an angel told him to hide some of

Saint Andrew’s bones. Soon after he did that, the emperor ordered that the relics of the saint be moved to  the Church of the Holy Apostles in Constantinople. Saint Regulus had another vision where an angel told him to take the remaining relics to “the ends of the earth” and build a shrine wherever he was shipwrecked. He eventually made his way to Fife, Scotland. Poor Saint Andrew,

whose body would never be in one piece again, had his skull sent back to Patras by Emperor Basil I sometime in the late 800’s. In 1208, after the crusaders sacked Constantinople, the remaining relics were transferred to Amalfi, Italy where the Cathedral of St. Andrew was built to house a tomb with the relics. In 1461 the Ottoman Turks crossed the straight of Corinth on sightseeing and real estate gathering expedition. The youngest surviving son of the Byzantine Emperor, Thomas Palaeologus, fled Patras with the skull of St. Andrew and made it to Italy where he

gave it to Pope Pius II who had it enshrined in one of the four main pillars of Saint Peter’s Basilica in Rome. The ulterior motive of the donation was to get the pope to declare a crusade against the Turks. The crusade never really got off the ground and the pope died away from the Vatican while trying to get more European countries involved. But at least we have an amazing statue of Saint Andrew in St. Peter’s Basilica to show for it. For several hundred years, the various parts of Saint Andrew were at peace but not at home. In 1964 Pope Paul VI sent all the relics of Saint Andrew that were in Vatican City back to Patros where they are again enshrined. The Cross of Saint Andrew was taken from Greece during the Crusades and was returned to Patras in 1980. In 2008 one of the relics that was still enshrined at the cathedral in Amalfi was given back to Patras.

5) Saint Andrew is the patron saint of Scotland: Some may know this since the Scottish flag basically screams it, but do you know why? While Saint Regulus is traditionally held to be the bringer of Saint Andrew’s relics to Scotland directly from Patras, it is possible that they were brought by Acca, the bishop of Hexam who brought the relics to Scotland around 732 when he was driven out for an unknown reason. He is said to have founded a church in Glasgow and also at Saint Andrews. Whether or not he had anything to do with the origins of golf is still being debated. In 832 the pict king Oengus II led his army against the Angles (of course). On the eve of the battle, he prayed for divine intervention and promised that if he was granted victory he would dedicate Scotland to Saint Andrew. On the day of the battle it was reported that clouds shaped like Saint Andrew’s cross appeared in the sky and Oengus led his troops to victory.

Pause and reflect for a moment…

Glory be to the Father, and to the Son, and to the Holy Spirit, as it was in the beginning, is now and ever shall be, world without end. Amen.

Awesome martyr and Apsotle, St. Andrew, set me on fire with a love for our Lord Jesus Christ, that I may thirst for His sacraments and burn with zeal for the spread of His kingdom. By your powerful intercession, help me in the performance of my duties to God, myself and all the world. Win for me the virtue of purity and a great confidence in the Blessed Virgin Mary. Protect me this day, and every day of my life. Keep me from mortal sin. Obtain for me the grace of a happy death. (Ask St. Andrew to pray for your intentions…Mention them…) Grant this through Christ our Lord. Amen.

Our Father…3 Hail Marys…Glory be…

Holy Mary, Mother of God, Pray for us. (repeat after each line)

Andrew, Native of Bethsaida in Galilee
Andrew, Son of Jona, a fisherman
Andrew, Brother to Simon Peter
Andrew, “First-Called” by Jesus
Andrew, baptized in the Jordan
Andrew, disciple of John the Baptist
Andrew, follower of Jesus
Andrew, a fisher of men
Andrew, who helped feed the 5,000

Apostle Andrew, a man of kindly nature…………… Intercede for us (repeat after each line)

Let us pray:
God of surprises, you called St. Andrew from being a fisherman to being an evangelist. Grant hope to all those at the state of despair so that they might return to God, our one and everlasting hope. Inspire us to share our Catholic faith and life with all who desire a deeper and more personal relationship with your son, Jesus, who loves us into new ways of living in this new millennium. We ask this in the holy name of Jesus the Lord, now and forever. Amen.

O CHRIST, our Lord, Who didst beautify the most blessed Andrew with the grace of apostleship, and the crown of martyrdom, by granting to him this special gift, that by preaching the mystery of the cross, he should merit death on the cross; grant us to become most true lovers of Thy holy
cross, and, denying ourselves, to take up our cross and follow Thee; that by sharing Thy sufferings in this life, we may deserve the happiness of obtaining life everlasting. Amen. 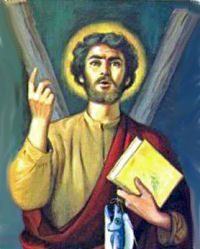 Saint Andrew, pray for us!

(If possible, kindly accompany this novena with the Holy Rosary at any hour of the day, either 5 or 10 or 15 or 20 decades…)

May the Divine assistance remain always with us, and may the souls of the faithful departed through the mercy of God rest in peace. Amen.

Blessing+
Through the intercession of Saint Andrew (Apostle & Martyr), may the Lord bless + us, keep us from all evil, and bring us to everlasting life. Amen.

Have you prayed your rosary today?

Help us Saint Andrew to learn the lesson of the Cross and to carry our daily crosses without complaint so that they may carry us to Jesus. Amen

Thank you dear St. Andrew for interceding for us. Amen