CONTEMPLATING TODAY’S GOSPEL: (JOHN 21:1-19) THE CONFIRMATION OF THE PAPACY OF ST. PETER BY CHRIST AND THE UNITY OF CHRISTIANS 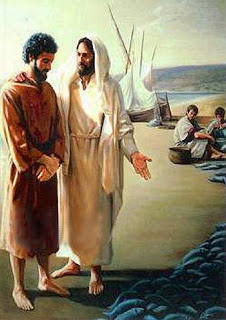 CONTEMPLATING
TODAY’S GOSPEL: (JOHN 21:1-19)
THRID SUNDAY OF EASTER, YEAR C
THE
CONFIRMATION OF THE PAPACY OF ST. PETER BY CHRIST AND THE UNITY OF CHRISTIANS

After the institution of
the Sacrament of Reconciliation last week, the gospel of today brings to our awareness
the confirmation of the papacy of St. Peter. Put differently, Christ entrusted
the entire flock (the people of God) to the fatherly care of St. Peter.

To begin with, we believe
that Christ conferred upon St. Peter, the role of a leader over the whole
Church, when he said in Matthew 16:18, “Simon son of John, you are a Rock
and upon this Rock I’ll build my Church…and I’ll give you the keys of the kingdom of heaven, whatever
you bind on earth shall be considered bound in heaven and whatever you loose on
earth shall be considered loosed in heaven..” In making Peter the foundation stone
of His Church and in handling him the “keys of the kingdom of heaven”
(the power to bind and loose which signifies authority and service), the Roman
Catholic Church sees Peter as the Leader of the apostles, with the greatest
authority, and this authority is being transmitted to the present day
representative of Peter.
.
More importantly, as we see in today’s gospel according to John 21:1-19, after
His death and Resurrection, Christ reaffirmed this leadership role of Christ in
John 21:15-ff: ” Peter, son of John, do you love me more than these others
do?…feed my sheep… Feed my lambs…etc. When we read in between the lines,
we would discover that Christ was not asking Peter to feed animals. No. In the
gospel according to John, John makes use of analogies and symbols to pass his
message. (for example, bread of life, true vine, good shepherd, salt of the
earth, light of the world etc.). Having identified himself as the good
shepherd; that is one who takes good care of his sheep (we, his children), and
seeing that he would return to the Father soon, He decided to hand this noble
task of shepherding the whole flock to St. Peter; and this we see in the gospel
of today.
Hence, we can see that the
role of a Shepherd/Pastor of the whole flock being was granted to Peter. The question 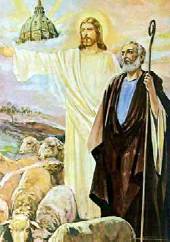 is: why didn’t Christ confer this authority on another apostle or to the whole
apostles? But he did this twice on Peter. This clearly points out the divine
preference made by Christ on Peter and portrays the role of St. Peter as a
“Spiritual father” in feeding, nourishing and taking care of the
whole Children. This function is clearly understood within the “sitz
im leben” (life setting) of the Jews as one who leads, one who
nourishes, one who takes care of the whole, etc. put differently, it denotes a
fatherly role. Hence, we come about the title “Pope” which comes from
the Latin word “Papa” simply means “Father”.

The Roman Catholic Church
combines this belief with the concept that Peter later became the first bishop
of Rome, and that the Roman bishops that followed Peter were accepted by the
early church as the central authority among all of the churches. This is what
we call Apostolic succession. The doctrine of apostolic succession is the
belief that the 12 apostles passed on their authority to successors, who then
passed the apostolic authority on to their successors, continuing throughout
the centuries, even unto today.
Apostolic succession,
combined with Peter’s supremacy among the apostles, results in the Roman bishop
being the supreme authority of the Catholic Church today.
We
cling tightly to this tradition because it’s true, and because all Christians
are commanded to do so by Paul in 1 Corinthians 11:2 and 2 Thessalonians 2:15.
For biblical corroboration look at Acts 1:21-26, where you’ll see the apostles,
immediately after Jesus’ Ascension, acting swiftly to replace the position left
vacant by Judas’s suicide. They prayed for guidance, asking God to show them
which candidate was “chosen to take the place in this apostolic ministry
from which Judas turned away.” After choosing Matthias they laid hands on
him to confer apostolic authority.
The
role of apostolic succession in preserving true doctrine is illustrated in the
Bible. To make sure that the apostles’ teachings would be passed down after the
deaths of the apostles, Paul told Timothy, “What you have heard from me
before many witnesses entrust to faithful men who will be able to teach others
also” (2 Tim. 2:2). In this passage he refers to the first three
generations of apostolic succession—his own generation, Timothy’s generation,
and the generation Timothy will teach. Look at 1 Timothy 1:6 and 4:14, where
Paul reminds Timothy that the office of bishop had been conferred on him
through the laying on of hands. Notice in 1 Timothy 5:22 that Paul advises
Timothy not to be hasty in handing on this authority to others. In Titus Paul
describes the apostolic authority Titus had received and urges him to act
decisively in this leadership role. 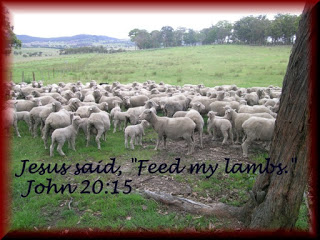 Today,
we pray for the unity of Christians, “that all may be One”, just as Christ prayed
(Jn 17:11; 20-23). For off from Christ, we can do nothing (Jn. 15:5). We are
all called to act and work in unity with Christ. In today’s gospel, Peter and
co. went for fishing without Christ and we were told they caught nothing until
Christ stepped in, and they caught a great number that the entire net was
filled with fishes. Analogically, Peter’s boat represents the Church, the
fishes represent the people of God, and the net represents the work of
evangelism. The fishes were caught and gathered together in the boat. They were
all united and none was left out. This is a call unity among Christians and non
Christians, a call for evangelization, working out for the kingdom and winning
souls for Christ. Today we see this effect (a practical dimension of Ecumenism
and inter-religious dialogue) in the works of Pope Francis, the successor of St.
Peter. We continue to pray for him that his faith might not fail and for the
grace to continue to pastor the flocks of God to greener pastures. Amen.
May we
never be tired of doing good (working for the kingdom). (cf. Gal. 6:9, 2Thess.
3:13)
(CLICK TO READ: DO YOU KNOW THAT THE BLESSED VIRGIN MARY IS THE ARK OF THE NEW COVENANT? LET US JOURNEY THROUGH THE SCRIPTURES)