MARY, THE ARK OF THE NEW COVENANT: LET US JOURNEY THROUGH THE SCRIPTURES 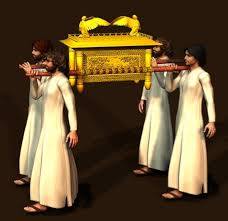 MARY, THE ARK OF THE NEW COVENANT: LET US JOURNEY THROUGH THE SCRIPTURES

This is one of the titles of Mary that is least understood ranging from weak
Catholics to non Christians. Now, let’s see what the Scriptures have to say on
this. I urge you to patiently take your time and read through.
THE
ARK OF THE OLD COVENANT AND THE BLESSED VIRGIN MARY (ARK OF THE NEW COVENANT)

God loved his people and wanted to be close to them. He chose to do so in a
very special way. The Catechism of the Catholic Church says, “The prayer
of the people of God flourished in the shadow of the dwelling place of God’s
presence on earth, the ark of the covenant and the temple, under the guidance
of their shepherds, especially King David, and of the prophets” (CCC
2594). God instructed Moses to build a tabernacle surrounded by heavy curtains
(cf. Ex 25-27). Within the tabernacle he was to place an Ark made of acacia
wood covered with gold inside and out. Within the Ark of the Covenant was
placed a golden jar holding the manna, Aaron’s rod that budded, and the stone
tablets of the covenant (cf. Heb 9:4).

When
the ark was completed, the glory cloud of the Lord (the Shekinah Glory) covered
the tent of meeting, and the glory of the Lord filled the tabernacle (Ex 40:34-35;
Nm 9:18, 22). The verb “to cover” or “to overshadow” and
the metaphor of a cloud are used in the Bible to represent the presence and
glory of God.
It’s
easy to miss the parallel between the Holy Spirit overshadowing the Ark and the
Holy Spirit overshadowing Mary, between the Ark of the Old Covenant as the
dwelling place of God and Mary as the new dwelling place of God.
God
was very specific about every exact detail of the ark (Ex 25-30). It was a
place where God himself would dwell (Ex 25:8). God wanted his words—inscribed
on stone—housed in a perfect container covered with pure gold within and
without. How much more would he want his Word—Jesus—to have a perfect dwelling
place! If the only begotten Son were to take up residence in the womb of a
human girl, would he not make her flawless? Now, notice that the Ark was revered as the holiest place in Israel because of what it contained. The Israelites did not single out the stone tablets containing the law or the staff of Aaron nor the manna for reverence. The entire ark and all its contents were revered. Notice that God struck a man dead when he tried to touch the ark, preventing it from falling. The Ark indeed is holy. Likewise, the Blessed Virgin (the new Ark) is honoured today principally because of her Son Jesus Christ; the privilege She received from God for being the mother of Christ. 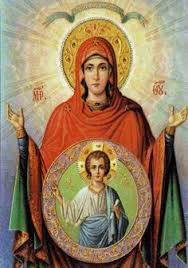 The
Virgin Mary is the living shrine of the Word of God, the Ark of the New and
Eternal Covenant. In fact, St. Luke’s account of the Annunciation of the angel
to Mary nicely incorporates the images of the tent of meeting with God in Sinai
and of the temple of Zion. Just as the cloud covered the people of God marching
in the desert (cf. Nm 10:34; Dt 33:12; Ps 91:4) and just as the same cloud, as
a sign of the divine mystery present in the midst of Israel, hovered over the
Ark of the Covenant (cf. Ex 40:35), so now the shadow of the Most High envelops
and penetrates the tabernacle of the New Covenant that is the womb of Mary (cf.
Lk 1:35).
An analogy between King
David and Mary would suffice to explain this fact better:
KING
DAVID AND ELIZABETH

Luke weaves additional parallels into the story of Mary—types that could be
overlooked if one is unfamiliar with the Old Testament. After Moses died,
Joshua led the Israelites across the Jordan River into the Promised Land.
Joshua established the Ark of the Covenant in Shiloh, where it stayed for more
than 200 years. One day the Israelites were losing a battle with the
Philistines, so they snatched the ark and rushed it to the front lines. The
Philistines captured the ark, but it caused them great problems, so they sent
it back to Israel (1 Sm 5:1-6:12). David went out to retrieve the ark (1 Sm
6:1-2). After a man named Uzzah was struck dead when he touched the ark, David
was afraid and said, “How can the
ark of the Lord come to me?” He left the Ark in the hill country of Judea for three months.
We were also told that David danced and
leapt in front of the ark and everyone shouted for joy. The house of
Obed-edom, which had housed the ark, was blessed, and then David took the ark
to Jerusalem (2 Sm 6:9-14).

COMPARE DAVID AND THE ARK
TO LUKE’S ACCOUNT OF THE VISITATION:

In
those days Mary arose and went with haste into the hill country, to a city of
Judah, and she entered the house of Zechariah and greeted Elizabeth. And when
Elizabeth heard the greeting of Mary, the
babe leaped in her womb; and Elizabeth was filled with the Holy Spirit
and she exclaimed with a loud cry, “Blessed are you among women, and
blessed is the fruit of your womb! And
why is this granted me, that the mother of my Lord should come to me?
For behold, when the voice of your greeting came to my ears, the babe in my
womb leaped for joy. And blessed
is she who believed that there would be a fulfillment of what was spoken to her
from the Lord.” (Lk 1:39-45)
When
David saw the ark he rejoiced and said, “How can the ark of the Lord come
to me?” Elizabeth uses almost the same words: “Why is this granted to
me that the mother of my Lord should come to me?” Luke is telling us
something—drawing our minds back to the Old Testament, showing us a parallel. When
David approached the ark he shouted out and danced and leapt in front of the
ark. He was wearing an ephod, the clothing of a priest. When Mary, the Ark of
the New Covenant, approached Elizabeth, John the Baptist leapt in his mother’s
womb—and John was from the priestly line of Aaron. Both leapt and danced in the
presence of the Ark. The Ark of the Old Covenant remained in the house of
Obed-edom for three months, and Mary remained in the house of Elizabeth for
three months. The place that housed the Ark for three months was blessed, and
in the short paragraph in Luke, Elizabeth uses the word blessed three times.
Her home was certainly blessed by the presence of the New Ark and the Lord
within.

When the Old Testament ark arrived—as when Mary arrived—they were both greeted
with shouts of joy. The word for the cry of Elizabeth’s greeting is a rare
Greek word used in connection with Old Testament liturgical ceremonies that
were centered on the Ark and worship (cf. Word Biblical Commentary, 67). This
word would flip on the light switch for any knowledgeable Jew. The ark returns
to its home and ends up in Jerusalem, where God’s presence and glory is
revealed in the temple (2 Sm 6:12; 1 Kgs 8:9-11). Mary returns home and
eventually ends up in Jerusalem, where she presents God incarnate in the temple
(Lk 1:56; 2:21-22).

It seems clear that Luke has uses typology to reveal something about the place
of Mary in salvation history.
The
Old Testament tells us that one item was placed inside the Ark of the Old
Covenant while in the Sinai wilderness: God told Moses to put the stone tablets
with the Ten Commandments inside the Ark (Dt 10:3-5). Hebrews 9:4 informs us
that two additional items were placed in the Ark: “a golden urn holding
the manna, and Aaron’s rod that budded.” Notice the amazing parallels: In
the Ark was the law of God inscribed in stone; in Mary’s womb was the Word of
God in flesh. In the Ark was the urn of manna, the bread from heaven that kept
God’s people alive in the wilderness; in Mary’s womb is the Bread of Life come
down from heaven that brings eternal life. In the ark was the rod of Aaron, the
proof of true priesthood; in Mary’s womb is the true priest, Jesus Christ. In
the third century, St. Gregory the Wonder Worker said that Mary is truly an
ark—”gold within and gold without, and she has received in her womb all
the treasures of the sanctuary.”
While
the apostle John was exiled on the island of Patmos, he wrote something that
would have shocked any first-century Jew. The ark of the Old Covenant had been
lost for centuries—no one had seen it for about 600 years. But in Revelation
11:19, John makes a surprising announcement: “Then God’s temple in heaven
was opened, and the ark of his covenant was seen within his temple.” What
did John say immediately after seeing the Ark of the Covenant in heaven?
“And a great portent appeared in heaven, a woman clothed with the sun,
with the moon under her feet, and on her head a crown of twelve stars; she was
with child” (Rv 12:1-2). The woman is Mary, the Ark of the Covenant,
revealed by God to John. She was seen bearing the child who would rule the
world with a rod of iron (Rv 12:5). Mary was seen as the Ark and as a queen.
(SEE ALSO: WHY DOES THE CATHOLIC CHURCH BAPTIZE IN THE CHURCH AND NOT IN THE RIVER?)
But
does this passage really refer to Mary? Some say the woman represents Israel or
the Church, and certainly she does. John’s use of rich symbolism is well known,
but it is obvious from the Bible itself that the woman is Mary. The Bible
begins with a real man (Adam), a real woman (Eve), and a real serpent (the
devil)—and it also ends with a real man (Jesus, the Last Adam [1 Cor 15:45]), a
real woman (Mary, the New Eve [Rv 11:19-12:2]), and a real serpent (the devil or the dragon). All of this was foretold in Genesis 3:15.
IN
SUMMARY
What Makes Mary the Ark of the New Covenant? 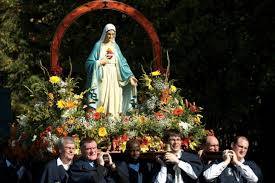 1.
The Ark of the Covenant was the sign of God’s real presence among His people.
In Jesus Christ, born of Mary, God was really present among his people in an
even more direct way.
2.
The Ark held the Word of God written in stone. Mary bore the Word of God in
flesh
3. The Ark held the bread from heaven, a foreshadowing of the Eucharist (see 1
Corinthians 10:1-4). Mary bore the Bread of Life, Jesus Christ (see John
6:48-50).
4.The Ark contained the rod of Aaron, symbol of his priesthood. Mary bore Jesus
Christ, our High Priest (see Hebrews 3:1).
5. If the Ark of the Covenant was holy, then by the same standards Mary is even
holier. As Mother of God, she is the Ark of the New Covenant, bearing Jesus
Christ, the Word of God, the Bread of Life, our great High Priest. That is not
a re-interpretation of the Gospel: it is a truth made clear by the New
Testament writers themselves.