YAHWEH OR JEHOVAH: WHICH IS THE PROPER NAME OF GOD? 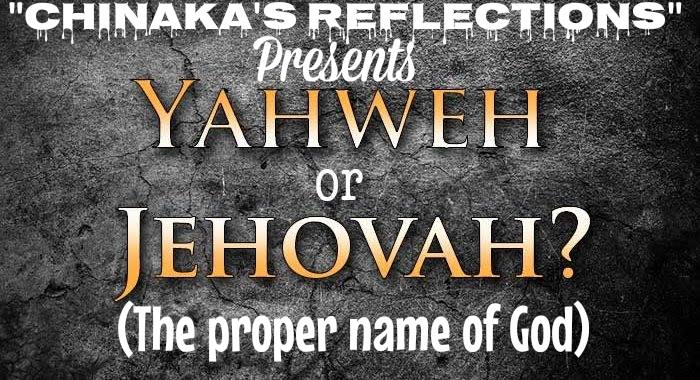 When you ask a child, especially a Christian: who is Jehovah? He/she is most likely to say that Jehovah is God. But ask, who is Yahweh, perhaps, he/she might not know. Many a time, I’ve heard people refer to God as Jehovah, and this is often used at songs, worships etc. The pertinent question remains: Is God’s name really Jehovah? Like seriously? When and how did that name creep into the Christian parlance? Let us consider the following:

In Hebrew, the name of God is spelt thus: “YHWH”; this was the very name revealed by God to Moses at the “burning bush” as contained in the Hebrew Scriptures (cf. Exodus 3), which we translate in English as “I AM”. Since ancient Hebrew had no written vowels, it is uncertain how the name was pronounced originally, but there are records of the name in Greek, which has written vowels. These records indicate that in all likelihood the name should be pronounced “YaHWeH.” Since this is the case, how then, how did we come about the word “Jehovah”?

Shortly before the first century A.D., it became common for Jews to avoid saying the Divine Name of God for fear of misusing it and breaking the second commandment (“You shall not take the Name of the Lord, your God, in vain,” Dt 5:11). Whenever they read Scripture aloud and encountered the Divine Name, they substituted another Hebrew word, “ADONAI” (which means “Lord” or “my Lord”), in its place. Eventually Hebrew developed written vowels, which appeared as small marks called vowel points and were placed above and below the consonants of a word. In the sixth or seventh century, some Jews began to place the vowel points for “Adonai” (a o a) over the consonants for YHWH to remind the readers of Scripture to say “Adonai” whenever they read “Yahweh.”

About the 13th century, the term “Jehovah” appeared when Catholic scholars took the consonants of “YHWH” and pronounced it with the vowels of “Adonai” (a o a), This resulted in the sound “YaHoWaH,” which is spelt in Latin as “JeHoVaH.” The first recorded use of this spelling was made by a Spanish Dominican monk, Raymundus Martini, in 1270.

From what we have seen so far, the name Jehovah happens to be an adulteration of the Holy Name YHWH. Interestingly, this fact is admitted in much Jehovah’s Witness literature, such as their Aid to Bible Understanding. This is surprising because Jehovah’s Witnesses hate the Catholic Church and have done everything in their power to strip their church off traces of Catholicism. Despite this, their group’s very name contains a Catholic “invention,” the name “Jehovah.” Jehovah’s Witnesses blast Orthodox Christendom for “hiding the name of God” by replacing “Jehovah” with the “Lord” (Adonai) whenever “YHWH” appears in Scripture. They say it is a Jewish “superstition” that dishonours God (which it does not). Yet their own religious body has a name that was invented as a result of the same thinking that produced use of “the Lord.”

However, if one addresses God as Jehovah without the knowledge that God should be addressed as Yahweh, I’m not saying that God would not listen to the person, however, what is worth doing, is worth doing well. Let us learn how to address God properly; besides, no one would allow himself/herself to be addressed in a name different from his/hers.

In summary, the Holy Name of God remains YHWH, which the Teaching Office and Authority of the Church interprets as “Yahweh”. Knowledge, they say, is power!