WHY THE CHURCH DOES NOT SAY/SING ALLELUIA IN LENT, AND WHAT EXACTLY SHOULD REPLACE ALLELUIA IN THE GOSPEL ACCLAMATION? 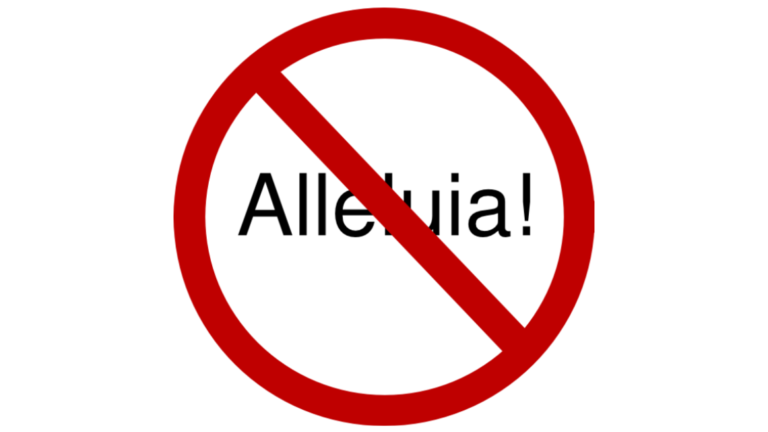 For some time now, I had been receiving similar messages from different persons privately, requesting to explain the reason why the Catholic Church omits ALLELUIA during Lent; in other words, why we do not sing or say “Alleluia” in Lent. I hereby present this piece in order to respond to the question. Let us now look at the context in which alleluia was used and the sentiment that flows with it.

The concept “Alleluia” or “Hallelujah” springs from Hebrew, signifying “Praise ye YAH” (Yahweh). The Alleluia in Revelation 19 is utilized in heaven, where a great multitude has gathered before the throne in the immediate presence of God Himself; the marriage feast of the Lamb (Christ) and his bride (the Church). I nostalgically remember those days in the Formation house, at Opere, Ibadan (Nigeria), when we sang this very hymn every Sunday during the liturgy of the hours at Vespers – Evening Prayers (outside lent). The hymn tells of the reign of God, his enemies overthrown, and the triumph of the gospel. Indeed, it is a victorious celebration; all heaven renders praise – a song of thanksgiving. The sound of the outpouring of praise and worship is so overwhelming that the apostle John can only describe it as “like a great multitude, like the roar of rushing waters and like loud peals of thunder” (verse 6). It is, therefore, a term of great joy. Therefore, our use of the Alleluia during Mass is a way of participating in the angels’ worship. It is also a reminder that the Kingdom of Heaven is already established on earth, in the form of the Church, and that our participation in Mass is a participation in Heaven.

During Lent, however, our focus is on the coming Kingdom, not on the Kingdom having come. The readings in the Masses for Lent and in the Liturgy of the Hours (the official daily prayer of the Catholic Church) focus heavily on the spiritual journey of Old Testament Israel toward the coming of Christ, and the salvation of mankind in His death on Good Friday and His Resurrection on Easter Sunday. We, too, are on a spiritual journey, toward the Second Coming and our future life in Heaven. In order to emphasize the penitential nature of that journey. For this reason, the Church, during Lent, removes the Alleluia and the “Gloria” (Glory to God in the Highest…) from the Mass/Liturgical prayers, in order that we might flow with the sentiment of the season of Lent and later sing it at Eastertide (where it makes more meaning), then consequently in other seasons.

Therefore, in Lent, we omit this sentiment of rejoicing and acknowledge our sins in the spirit of repentance so that one day we may again have the privilege of worshipping God as the angels do.

The Alleluia returns at Easter. Put differently, on Easter Sunday—or, rather, at the Easter Vigil (on Holy Saturday night), the priest chants a triple Alleluia before the gospel is read, and everyone present responds with a triple Alleluia. The Lord is risen; his enemies overthrown, the gospel has triumphed, the kingdom has come, our joy is complete; and, in concert with the angels and saints, we greet the risen Lord with shouts of “Alleluia!”

If alleluia is not to be said at Lent, what then should we say or sing before the Gospel acclamation at Mass? I guess many of you might say it is “Glory and Praise to You, Lord Jesus”; however, let’s see what the Church’s document has to say about this. In this regards, the General Instruction of the Roman Missal (GIRM), Chapter II, Section II, Part B, Paragraph 62b succinctly states: “During Lent, in place of the Alleluia, the verse before the Gospel is sung, as indicated in the Lectionary. It is also permissible to sing another psalm or tract, as found in the Graduale.” So, in fact, the GIRM indicates that the appropriate song that is sung before the Gospel is the prescribed verse (which can be found in a missal or missalette, as well as in the official Lectionary that the priest uses) or another psalm verse (a biblical passage) found in the Graduale. In case you’re wondering why the “Glory and praise…” is being used, kindly note that the “Glory and Praise to You, Lord Jesus Christ” is drawn from a biblical passage (cf. Philippians 1:11) and found in the Graduale as well. Therefore, while it is not prescribed as the only possible replacement for the Alleluia, other gospel verses found in the missal/official lectionary or a psalm verse could equally be used.

PS: After sharing this post to my Catholic forum on WhatsApp, some questions came up. Therefore, I’ll add up the answers shortly.

“Padre, I want to confirm the restriction of alleluia during Lent. You mentioned that alleluia means “Praise the Lord.” Some priests and especially in our charismatic gathering, some of us still shout Praise the Lord and they expect others to respond with amen. Is this restriction just for Liturgical celebrations? Why do people even some priests shout praise the Lord knowing that it means alleluia? Thank you.”

“Alleluia” is the original word, and as a matter of fact, a way of life (worship) in heaven as described already in my post. Inasmuch as Alleluia means “Praise ye Yahweh” or “Praise the Lord”; however, it goes deeper than merely saying “praise the Lord”. We’ve often heard the song: “Alleluia is a heavenly language…” That is exactly what I tried demonstrating in my post. It is a solemn way of inviting everything that has breath to praise the Lord who has victoriously overcome sin and death by the resurrection of Christ.

Inasmuch as we do not say alleluia in Lent, it doesn’t mean that God would not be praised. This is because Alleluia is a peculiar kind of praise to the Almighty in relation to his victory, and that of Lamb. Therefore, it should be omitted in Lent, in order that we might appreciate its meaning at Easter.

Notice that the “Gloria…” (Glory to God in the highest…) is also omitted in Lent, but we often sing “Glory and praise to you, o Christ” during the acclamation of the Gospel. One might think it’s a contradiction or it’s all about avoiding the use of the word “Glory”, but then, the term is beyond just “Glory to God”, but a peculiar way of describing the Angelic song of praise to the ALMIGHTY in the highest, for the work He has wrought upon mankind by sending His beloved Son to redeem the world… That doesn’t mean that during Lent, we won’t give glory to God.

It’s all about looking at the context of the words to be used and not to be used at a particular time. Therefore, alleluia is not restricted to liturgical usage only, but all other aspects of private worships and devotions…

Accordingly, are you saying that during Easter there’s a particular way to praise God or Easter is not celebrated in Heaven so the Heavenly words or way of praise shouldn’t be used during Easter on Earth? I am not understanding that context?

1. I suggest you return to the question that led to my answer… It was the use of alleluia by we (humans) on earth during Lent, not by the heavenly beings.

2. Nevertheless, “whatever is bind here is considered bound in heaven, and whatever is loosed here is loosed in heaven” (cf. Mat. 18:18). Therefore, since the three Churches (church in earth, Purgatory, and heaven) are believed to be in communion with each other, it follows then that when we celebrate Lent on earth, the heavenly church gets in communion with us, likewise that of Easter… Little wonder the Vatican II states in the Constitution on the Sacred Liturgy “SACROSANCTUM CONCILIUM” (#8), “In the earthly liturgy, by way of foretaste, we share in that heavenly liturgy which is celebrated in the holy city of Jerusalem toward which we journey as pilgrims, and in which Christ is sitting at the right hand of God, a minister of the sanctuary and of the true tabernacle.”