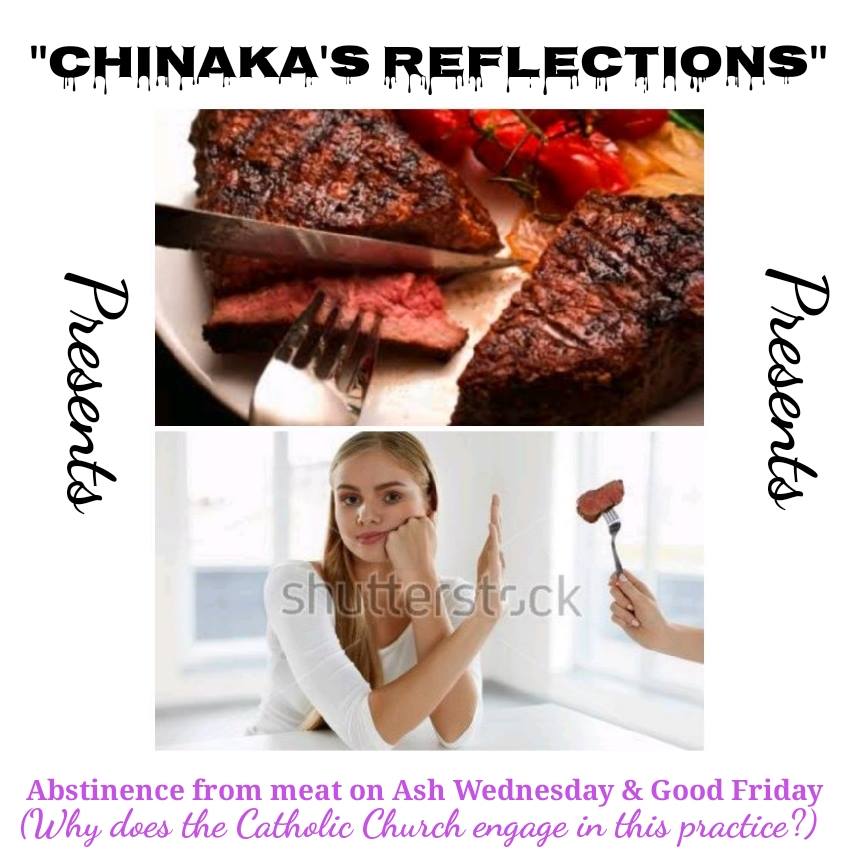 Abstinence from meat on Ash Wednesday and Good Friday must be understood as the Catholic Church Law. However, it must be noted that this Church’s law on abstinence from meat is not only on Good Friday and Ash Wednesday but also extends to all Fridays of the Year, because Fridays are known as penitential days, emanating from Good Friday – the day Jesus Christ our Saviour suffered and died for humanity. While this post seeks to explain the reasons for such practices culturally and biblically, it is pertinent to first consider a document of the Church (Canon Law) in order to understand law properly.

According to the Code of Canon Law (Canons 1250-1251): Can. 1250: “The penitential days and times in the universal Church are every Friday of the whole year and the season of Lent.” Can. 1251: “Abstinence from meat, or from some other food as determined by the Episcopal Conference, is to be observed on all Fridays unless a solemnity should fall on a Friday. Abstinence and fasting are to be observed on Ash Wednesday and Good Friday.”

Having noted this, it is important to know that there is a reason why we abstain from meat and not from fish or eggs on Ash Wednesday, Good Friday and other Fridays of the Year. As indicated by the famous clarification of the Catholic custom, the reason we keep away from meat on Fridays is profoundly established in the verifiable conditions of the antiquated Mediterranean eating routine. As the story goes, the early Christian group (being Mediterranean) had fish as a major part of their diet, which was less expensive. Meat, on the other hand, was less common and more expensive. It was considered a diet for the rich. Thus, it was thought to be more appropriate to fast from meat than from fish, since this inclined to a certain degree of simplicity. Moreover, meat is “generally” considered tastier than fish; hence, abstaining from meat meant also sacrificing something of the delicacy of the meal. Since meat is a chief part of most meals served in most places and is usually the most valued or expensive part of a meal, abstinence from meat on such days is a good way for Christians to unite themselves more closely to the sufferings of the Lord (cf. Rom. 8:16-17, 1 Pet. 2:21) by denying themselves something they enjoy. Abstinence from meat is a sacrifice which unites them in penance and strengthens the solidarity of the Church through mild suffering. It’s also a good form of mortification, which disciplines the soul and strengthens its resistance to concupiscence. Paul practised and recommended mortification: “I drive my body and train it, for fear that after having preached to others, I myself should be disqualified” (1Cor. 9:27).

Also, the Church Fathers (and even secular philosophers) held that meat excited the passions of the flesh. If we were to ask the early and medieval Christians why we should abstain from meat on Fridays, they would tell us, “MEAT LEADS TO CONCUPISCENCE”. Therefore, we abstain from meat, that our fleshly passions may be calmed. Meat fuels the concupiscence of the flesh. There are three reasons why we fast: to prevent future sin, to atone for past sin, and to direct our minds to the spiritual realities. To put the matter quite simply – fasting is about curbing the concupiscence of the flesh so that the soul will be more open to heaven. It is this internal logic of fasting which directs the Church to require her children to abstain from meat on Fridays. The idea is that abstaining from meat really does physiologically aid the faithful in freeing themselves from the flesh and directing themselves to worship God.

Now before anyone judges too quickly that this connection between meat and fleshly desires is just some hangover from the middle ages, consider what modern science tells us. Science also makes us understand that zinc is a major factor in building a person’s libido and exciting the concupiscence of the flesh. While it is true that oysters, crabs, and lobster are all high in zinc, the main sources of zinc (in a common diet) are red meat, lentils, beans and whole grains, as well as lamb, chicken, pork, etc. The general rule is that most fish and most vegetables do not have much zinc and, therefore, do not tend toward the concupiscence of the flesh. Here we see that modern science corroborates what observant people have known for centuries.

We note that the Church’s law is based on generalities; hence, though there are indeed certain foods beyond meat, which excite the passions, the general norms of the Church are given for the more common cases. Therefore, abstaining from meat on Ash Wednesday, Good Friday and other Fridays of the Year will help the Catholic, both spiritually and physiologically, to be free from sin and to direct the heart and mind to the things of heaven.

Above all, let it be noted that in Canon 1252, the Church states: “The law of abstinence binds those who have completed their fourteenth year. The law of fasting binds those who have attained their majority, until the beginning of their sixtieth year. Pastors of souls and parents are to ensure that even those who by reason of their age are not bound by the law of fasting and abstinence, are taught the true meaning of penance”.

REFLECTION/HOMILY FOR THE MEMORIAL OF OUR LADY OF SORROWS, YEAR II

NOVENA FOR THE NATIVITY OF THE BLESSED VIRGIN MARY: DAY 9 (For all Priests and Religious)