“WHY SHOULD I CONFESS MY SINS TO A PRIEST WHO IS ALSO A MORTAL MAN LIKE ME? WHAT IS THE SCRIPTURAL BASIS FOR THIS?” 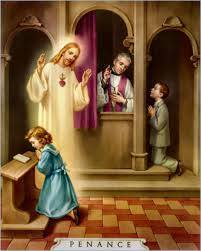 INBOX
QUESTION:
“WHY SHOULD I CONFESS MY SINS TO A PRIEST WHO IS ALSO A MORTAL MAN LIKE
ME? WHAT IS THE SCRIPTURAL BASIS FOR THIS?”

RESPONSE:
Following my post on Divine Mercy Sunday (03/04/16) which dealt with the
sacrament of Confession, I received an inbox question, highlighted above. It is
apparent that many unbelievers, protestants and even some lukewarm Catholics
who profess the CREED (…I Believe in the forgiveness of sins…) believe that
the sacrament of confession is a waste of time and that they cannot confess all
their sins to a priest who is a “mortal” man like them;;; That, it is better to
confess directly to God.  A priest by the virtue of his ordination is
being transformed inwardly and configured to Christ, being able to carry out
the priestly functions of Christ; this we see in the life and activities of the
Apostles (cf. the book of Acts).
Well, nobody
is preventing anyone to go directly to God but the right thing ought to be done
in the right manner.

But then, What is Confession?
CONFESSION
Confession is one of the least understood of the Sacraments of the Catholic
Church. In reconciling us to God, it is a great source of grace, and Catholics
are encouraged to take advantage of it often. But it is also the subject of
many common misunderstandings, both among non-Catholics and among Catholics
themselves. The Sacrament of Penance,
commonly called Confession, is one of the seven sacraments recognized by the
Catholic Church. Catholics believe that all of the sacraments were instituted
by Jesus Christ himself. In the case of Confession, that institution occurred
on Easter Sunday, when Christ first appeared to the apostles after his Resurrection.
Breathing on them, he said: “Receive the Holy Spirit. For those whose sins you
forgive, they are forgiven; for those whose sins you retain, they are retained”
(John 20:22-23).
Let us journey through the scriptures and we would discover that this
sacrament has a strong root and meaning with Judaism and with the early
Christians.
SCRIPTURAL
FOUNDATION OF CONFESSION
(a) Old Testament:
Leviticus 19: 20-22: A man who committed adultery had to bring a guilt offering
for himself to the door of the tent of meeting (holy place where the Ark of the
Covenant, which contained God’s true presence was kept). But then it adds “And
the priest shall make atonement for him …before the Lord for his sin…and the
sin which he has committed shall be forgiven.” (see also Leviticus 5: 5-6) The
priest could not make atonement if he were not aware of the man’s sin. He is
acting as a mediator for the repentant sinner.

Having said this, an objection may arise, and it is: “Well that is the Old
Testament, but now we have Jesus, who suffered for our sins”.
WHAT DOES THE
NEW TESTAMENT HAVE TO SAY?
(b) New Testament:
Matthew 3: 16 (and Mk 1: 5): “. . . they were baptized by him (John the
Baptist) in the river Jordan, confessing their sins.” Thus,  he who prepared the way for Christ, listened
to confessions of sin.
We learn in Luke’s account of the Baptist that he answered many questions for
the people concerning the behaviour they should follow, but freely confessed
that he was not the Christ (Luke 3: 16-17). He doubtless heard countless
confessions of sin, but he knew where forgiveness of sin came from for when
Jesus approached he declared, “Behold the Lamb of God, who takes away the
sins of the world” (John 1: 29).

Jesus then sent his disciples to baptize throughout Judea (John 3: 22) and they
too, doubtless heard the confessions of many sinners as they travelled from
village to village. So Jesus used his disciples and John the precursor to hear
confessions of sins, but this is not the sacrament of confession, any more than
the baptism of John was the baptism of the Holy Spirit, which came after John
the Baptist’s time.
Let’s see if
the New Testament shows men receiving the authority to forgive sins in God’s
name. Matthew 9: 6-8: Jesus tells us that He was given authority on earth to forgive
sins (a power reserved to God alone) and proves it with miraculous healing and
then Scripture notes this same authority was given to “men” (plural). Is this
merely a figure of speech? No, John’s Gospel makes it clear Jesus intended to
give this sacrament to men: John 20: 21-23: In his very first resurrection
appearance, our Lord gave this awesome power to his Apostles with the
words: “Receive the Holy Spirit. If you forgive the sins of any, they are
forgiven; if you retain the sins of any, they are retained.” How could they
forgive sins if the sins were not confessed? They could not. This authority
comes through the gift of the Holy Spirit which precedes it.
Does this
remind of you what He told Peter (Mt. 16: 19) and then the other apostles (Mt.
18:18)? “I will give you the keys of the kingdom of heaven, and whatever you
bind on earth shall be bound in heaven, and whatever you loose on earth shall
be loosed in heaven.” This includes sins. Jesus allowed for us to receive
spiritual consolation and counsel in this beautiful sacrament of the Church. We
see this awesome power in other sacraments as well. What today we call the
sacrament of the sick. Again, we look to Scripture: James 5: 14-17: “Is
any among you sick? Let him call for the elders of the church, and let them
pray over him, anointing him with oil in the name of the Lord; 15 and the
prayer of faith will save the sick man, and the Lord will raise him up; and if
he has committed sins, he will be forgiven. Therefore confess your sins to one
another …” Notice the command does not say confess your sins straight to God.
In this context of this verse, a person is told to “summon the presbyters
of the church” (James 5:14). Presbyter
is the Greek word for priest.
WHO FORGIVES
SINS?
Only God has the authority to forgive sins. Yet, this authority is mediated
through others. The Jews questioned why Christ was forgiving sins, because they
did not realize He was God. We must not forget that Jesus is also a man. The
Church makes us to realize that the Priest forgives sins by the POWER OF GOD
when he pronounces the words of absolution (I absolve you of your sins in the
name of the FATHER and of the SON and of the HOLY SPIRIT). Christ passed on
this authority to forgive sins to his apostles and they in turn “laid hands”
(1 Timothy 4: 14 and 5:22 show laying on of hands as an ordination to God’s
service) on other good men (this is the sacrament of holy orders) and hence
ordained men are used by God to give assurance of forgiveness of sins
(absolution) to one who is sincerely repentant, has a firm purpose of amendment
(confession of sins must not be a mere ritual but rather part of a process of
conversion of heart and mind) and confesses their sins (honestly). Therefore,
the Bishops are the Successors of the Apostles, and the faculty of confession
is primarily reserved to them, and this faculty is granted to priests by their
Local Ordinary (Bishop)
Hence, based on the Biblical evidence, we see forgiveness of sins is explicitly
tied to confession to a priest, who has the authority to forgive sins, which is
given by Christ. Christ thus heals the relationship through the priest and we
are reconciled to both God and His Church – healing the two-fold damage done in
our relationships.
REQUIREMENTS
FOR CONFESSION
Three things are required of a penitent in order to receive the sacrament
worthily:
1. He must be contrite—or, in other words, sorry for his sins.
2. He must confess those sins fully. (This is so, because, anyone who willfully
conceal a serious sin in confession is guilty of a great sacrilege by telling a
lie to the Holy Spirit in making a bad confession).
3. He must be willing to do penance and make amends for his sins.
(SEE ALSO: A GOSPEL REFLECTION FOR DIVINE MERCY SUNDAY (John 20:19-31):

“THE MERCY OF GOD CREATES ANEW”)

Here comes the ultimate question: “When last did you go to confession?
When last did you approach this throne of grace, of mercy and forgiveness? When
last did you visit this Laundry of the Holy Spirit? We should endeavour to go
to confession as soon as we fall into sin, and make a firm purpose of
amendment. This sacrament gives grace to the soul to those who receives it
worthily. 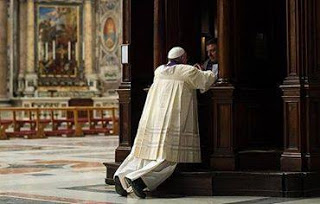 Even the Pope, the Shepherd of the whole Flock goes
to confession… How much more we (the flock of Christ), think about it.