WHY DOES THE CATHOLIC CHURCH OFTEN BAPTIZE IN THE CHURCH AND NOT IN THE RIVER? 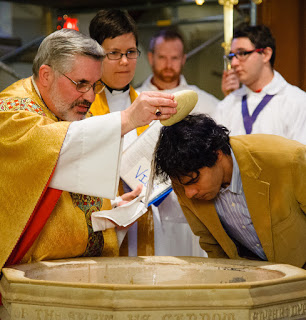 WHY DOES THE CATHOLIC CHURCH
OFTEN BAPTIZE IN THE CHURCH AND NOT IN THE RIVER?
INBOX QUESTION
“One more question Mr. Chinaka. From the question I asked you concerning
baptism in the Catholic Church, you made reference to the Didache (an early Syrian
Church document) which supports baptism by pouring water three times upon the head in the name of the Father, Son, and
Holy Spirit. But the examples we have in the Scripture supports baptism by
immersion in the river. Hence, can you state any example(s), if you could, from
the Scripture which support(s) baptism without going to the river?
Still the same journalist. Thanks!”
RESPONSE
Dear journalist, Christ DIDN’T advise us to go the river for “Christian
Baptism”; he clearly stated “water and the Holy Spirit” (cf. Jn. 3:5)
and later gave us the Trinitarian formula – FATHER, SON AND THE HOLY SPIRIT.
(cf. Matt. 28:19)
We have instances where people were baptized in the Acts of the
Apostles without going to the river for immersion. Let us consider the following
portions of the Scripture: “She was baptized, with her household”
(Acts 16:15). Does this make sense to you?
Ok, let me explain. The Philippian jailer
whom Paul and Silas had converted to the faith was baptized that night along
with his household. We are told that “the same hour of the night . . . he
was baptized, with all his family” (Acts 16:33). And in his greetings to
the Corinthians, Paul recalled that, “I did baptize also the household of
Stephanas” (1 Cor. 1:16). In all these cases, whole households or families
were baptized, and it is very clear from the circumstances and situations that
the Apostles did not take them to the river for immersion.

The Catholic Church and most Christian religions teach that WATER is essential
to the administration of the Sacrament of Baptism. But when it comes to the
manner in which the water should be used, there is controversy. Should it be
done by immersion, pouring or sprinkling?

In the Roman Catholic Church, most believers are baptized by pouring (also
known as infusion). At the same time, Catholics also believe that is a VALID
way of baptizing. Some Protestant and Evangelical Churches reject all form of
baptism other than immersion. They claim that most Catholics are not validly
baptized. Do they have a good argument?

According to these Protestant and Evangelical Churches, the rite
of baptism was always by immersion until the Council of Ravenna in 1311 A.D,
when the Catholic Church proclaimed “Baptism is to be administered through
immersion or aspersion.” (“Aspersion” means “sprinkling.”)
Was the rite of baptism always by immersion prior to 1311 A.D?
To find the answer to this question, we turn to the “Didache”, the same Syrian
liturgical manual that you made reference to from my earlier post, written
around 70 A.D and widely circulated among the churches in the first few
centuries of Christianity. These are perhaps the earliest Christian writings
outside of the New Testament. These writings bore witness to the sacramental
practice of the Christians in the apostolic age.
In Chapter 7 of the Didache, we read, “Concerning baptism,
baptize in this manner: Having said all these things beforehand, baptize in the
name of the Father and of the Son and of the Holy Spirit in living water (that
is, in running water, as in a river). If there is no living water, baptize in
other water; and, if you are not able to use cold water, use warm. If you have
neither, pour water three times upon the head in the name of the Father, Son,
and Holy Spirit.”

These instructions of the Didache represent an established custom four decades
after the death and Resurrection of our Lord Jesus Christ, It was written while
some of the apostles were still living. It is around the same time that “The
Apocalypse of John” was written.

Turning to another source of early Christian writings, Cyprian advised that no
one should be “disturbed because the sick are poured upon or sprinkled
when they receive the Lord’s grace” (Letter to a Certain Magnus 69:12
[A.D. 255]). Also, Tertullian described baptism by saying that it is done
“with so great simplicity, without pomp, without any considerable novelty
of preparation, and finally, without cost, a man is baptized in water, and amid
the utterance of some few words, is sprinkled, and then rises again, not much
(or not at all) the cleaner” (On Baptism, 2 [A.D. 203]). Obviously,
Tertullian did not consider baptism by immersion the only valid form, since he
says one is only sprinkled and thus comes up from the water “not much (or
not at all) the cleaner.”

It must be remembered that in the early days of the Catholic
Church, many of the believers met in the catacombs. There were no rivers of
flowing water in those tunnels. Furthermore, in view of the fact that the
Christians were persecuted during the first four hundred years, it would have
been unwise for any believers to gather in groups by the rivers and lakes in
order to be baptized. As it is out of the question to practice immersion today
when someone is on their death bed, so it was in the early days of the Church.
There are many reasons as to why immersion was frequently inconvenient.
From what we have seen so far with regards to the practice of
Christian baptism without going to the river, from the practice of the Apostles
and the early Christians as cited above in relation with the injunction of
Christ (Water and the Holy Spirit), we understand clearly that while baptism in
the river is valid and ok, Christian baptism does not necessarily need to be
carried out in a river in order to be valid. Hence, the act of pouring or
sprinkling can also be considered valid.
When members of the Protestant and Evangelical Churches claim
that Catholic baptism of sprinkling is not valid, only the rite of immersion in
a river, they speak out of ignorance. If they had thoroughly investigated the
matter, they would have learnt otherwise.
CLICK ALSO TO READ: QUESTIONS CONCERNING THE CATHOLIC BAPTISM