WHY DOES THE CATHOLIC CHURCH BAPTIZE INFANTS? INFANT BAPTISM AND ITS SCRIPTURAL JUSTIFICATION 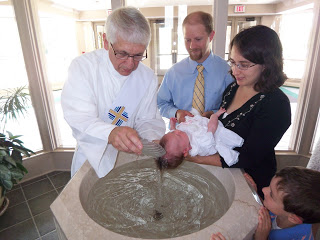 WHY DOES THE CATHOLIC CHURCH BAPTIZE INFANTS?
INFANT BAPTISM AND ITS SCRIPTURAL JUSTIFICATION

INBOX QUESTION
“Hello Chinaka, I read your post on “infant baptism and its
scriptural justification” some time ago, I kindly request you help me repost it
so as to refer it to a friend. Thank you”

Another bone of contention between the “fundamentalists” and the
Catholic Church is the issue of infant baptism. They tend to cite numerous
texts averring to the fact that only adults must be baptized. I also see this
as a case of ignorance; if only they had read the scriptures properly, they
would have been clarified and refrain from their criticisms.  This post aims at clarifying and justifying with biblical examples the practice of infant
baptism, beginning from the Old Testament through the New Testament (the record
of infant baptism in the Acts of the Apostles); drawing a parallelism between Baptism
and Circumcision, and equally treats the objection of the fundamentalists as to
whether baptism is necessary for salvation. Please kindly take your time and
read along.
In the book of Genesis 15 God made a covenant with Abraham. This
covenant was sealed with the sign of CIRCUMCISION in Genesis 17. God promised
to bless Abraham. For Abraham this meant two things in particular, offspring
and land. But at the heart of the covenant was God’s promise that he would be a
God to Abraham and his children (Gen. 17:7, 8). Circumcision was not just a
physical thing, marking out ethnic Jews. Circumcision was full of spiritual
meaning. The circumcision of the flesh was always meant to correspond with
circumcision of the heart (Rom. 2:25-29). It pointed to humility, new birth,
and a new way of life (Lev. 26:40-42; Deut. 10:16; 30:6; Jer. 4:4; 6:10; 9:25).
In short, circumcision was a sign of justification. Paul says in Romans 4:11
that Abraham “received the sign of circumcision as a seal of the righteousness
that he had by faith while he was still uncircumcised.” God’s own
interpretation of circumcision is that it was much more than just a physical
sign for national Israel.
Children today are baptized based on this same covenant with
Abraham. Paul makes clear in Galatians 3 what Peter strongly suggests in Acts 2,
namely that the Abrahamic covenant has not been annulled. It is still
operational. In fact, we see the basic promise of the Abrahamic covenant
running throughout the whole Bible, right up to the new heaven and new earth in
Revelation 21.

As the Jews practiced proselyte baptism, that sign came to be seen as marking
inclusion in the covenant people. For a while circumcision existed along
baptism, but as the early church became more Gentile, many of Jewish rites were
rendered unnecessary, and sometimes even detrimental to the faith. Thus,
baptism eclipsed circumcision as the sign renewal, rebirth, and covenant
membership.

Let us consider once again the very words of our Master, Jesus Christ: “Let the
little Children come to me and do not hinder them; for to such belongs the
kingdom of heaven” (Matt. 19:14). More detail is given in Luke’s account
of this event, which reads: “Now they were bringing even infants to him
that he might touch them; and when the disciples saw it, they rebuked them. But
Jesus called them to him, saying, ‘Let the children come to me, and do not
hinder them; for to such belongs the kingdom of God’” (Luke 18:15–16). But
the text in Luke 18:15 says, “Now they were bringing even infants to
him” (Greek, Prosepheron de auto kai ta brepha). The Greek word brepha means
“INFANTS”—children who are quite unable to approach Christ on their
own and who could not possibly make a conscious decision to “accept Jesus
as their personal Lord and Saviour.” And that is precisely the problem.
Fundamentalists refuse to permit the baptism of infants and young children,
because they are not yet capable of making such a conscious act. But notice
what Jesus said: “to such as these (referring to the infants and children
who had been brought to him by their mothers) belongs the kingdom of heaven.”
The Lord did not require them to make a conscious decision. He says that they
are precisely the kind of people who can come to him and receive the kingdom.
Now juxtapose with what Christ said to Nicodemus “No one can enter the
kingdom of heaven unless he is born of water and the Spirit” (John 3:3-5).
If this statement of Christ is focused to ALL, then we should NOT prevent the
children from being baptized, because everyone is born in SIN (just as the
psalmist says: “For in Sin I was born, a sinner was I conceived…” Ps. 51. This
kind of sin is called original sin which inherited by all) Hence, the best way
to bring the Children to Christ is to first get rid of their sins (original
sin); because to them belong the kingdom of heaven. Hence, since they cannot
profess Christ and believe in Him consciously, it is the duty of their parents
and god-parents to raise them up in the Christian way of life so that they
would come to a proper understanding of this. So if Jesus said “let them
come unto me,” who are we to say “no,” and withhold baptism from
them?

Furthermore, if you followed the analogy I made vis-à-vis circumcision, then
you would understand what Paul meant when he noted that baptism has replaced
circumcision (Col. 2:11–12). In that passage, he refers to baptism as “the
circumcision of Christ” and “the circumcision made without
hands.” Of course, usually only infants were circumcised under the Old
Law; circumcision of adults was rare, since there were few converts to Judaism.
If Paul meant to exclude infants, he WOULD NOT have chosen circumcision as a
parallel for baptism.

In the Old Testament, if a man wanted to become a Jew, he had to believe in the
God of Israel and be circumcised. In the New Testament, if one wants to become
a Christian, one must believe in God and Jesus and be baptized. In the Old
Testament, those born into Jewish households could be circumcised in
anticipation of the Jewish faith in which they would be raised. Thus in the New
Testament, those born in Christian households can be baptized in anticipation
of the Christian faith in which they will be raised. The pattern is the same:
If one is an adult, one must have faith before receiving the rite of
membership; if one is a child too young to have faith, one may be given the
rite of membership in the knowledge that one will be raised in the faith by his
parents and god-parents. This is the basis of Paul’s reference to baptism as
“the circumcision of Christ”—that is, the Christian equivalent of
circumcision.

(CLICK TO READ: “BUT THE BIBLE MAKES REFERENCE OF JESUS TALKING ABOUT ELIJAH RETURNING IN THE FORM OF JOHN THE BAPTIST; IS THIS NOT A SUPPORT FOR REINCARNATION?”)