BIBLICAL REASONS WHY CATHOLICS MAKE USE OF IMAGES….YES, IT IS IN THE BIBLE!!! 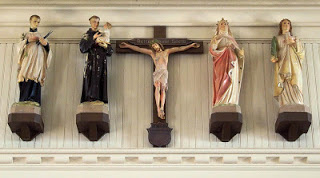 BIBLICAL REASONS WHY CATHOLICS MAKE USE OF IMAGES….YES, IT IS IN THE BIBLE!!!

INBOX QUESTION:
“WHY DO CATHOLICS MAKE USE OF IMAGES WHEN GOD COMMANDED IN EXODUS CHAPTER 20 NOT TO MAKE IMAGES?”

RESPONSE:
Over
and over again, many non-Catholics keep criticizing our use of images in the
Catholic Church. They see it as a major problem with us (Catholics) and as
such, they often refer us to the book of Exodus chapter 20; consequently condemning
or charging us with idolatry. Personally, I see this as an act of ignorance; if
only they (i.e those who accuse the Catholic Church of idolatry), had read the
bible properly, they would have understood better and stop their criticisms.

Now let us examine their claims…
PROTESTANTS’ CLAIMS
The non Catholics often refer
us to the Commandments; which according to the first commandment, God said: “I
am the Lord your God, who brought you out of the land of Egypt, out of the
house of bondage. You shall have no other gods before me. You shall not make
for yourself a graven image, or any likeness of anything that is in heaven
above, or that is in the earth beneath, or that is in the water under the
earth; you shall not bow down to them or serve them (Ex. 20:2–5).
OUR RESPONSE:

God does not prohibit statues or images; he prohibits the adoration of them. If
God truly meant that we were not to possess any statues at all, then he would
later contradict himself. Just five chapters after this commandment in Exodus
20, God commanded Moses to build the ARK of the Covenant, which would contain
the presence of God and was to be venerated as the holiest place in all of
Israel. Here is what God commanded Moses concerning the statues on it:
“AND YOU SHALL MAKE TWO CHERUBIM OF GOLD; OF HAMMERED WORK SHALL YOU MAKE
THEM, ON THE TWO ENDS OF THE MERCY SEAT. MAKE ONE CHERUB ON THE ONE END, AND
ONE CHERUB ON THE OTHER END; OF ONE PIECE WITH THE MERCY SEAT SHALL YOU MAKE
THE CHERUBIM ON ITS TWO ENDS.” (Ex. 25:18–19).

In
Numbers 21:8–9, not only did our Lord order Moses to make another statue in the
form of a bronze serpent, he commanded the children of Israel to look to it in
order to be healed. The context of the passage is one where Israel had rebelled
against God, and a plague of deadly snakes was sent as a just punishment. This
statue of a snake had no power of itself—we know from John 3:14 it was merely a
type of Christ—but God used this image of a snake as an instrument to effect
healing in his people.
Further,
in 1 Kings 6, Solomon built a temple for the glory of God, described as follows:
“In the inner sanctuary he made two cherubim of olivewood, each ten cubits
high. . . . He put the IMAGE of the cherubim in the innermost part of the
house. . . . He carved all the walls of the house roundabout with carved
figures of cherubim and palm trees, and open flowers, in the inner and outer
rooms. . . . For the entrance to the inner sanctuary he made doors of
olivewood. . . . He covered the two doors of olivewood with carvings of
cherubim, palm trees, and open flowers; he overlaid them with gold (1 Kgs.
6:23, 27, 29, 31, 32). King Solomon ordered the construction of multiple images
of things both “in heaven above” (angels) and “in the earth beneath” (palm
trees and open flowers). And then, after the completion of the temple, GOD
DECLARED HE WAS PLEASED WITH ITS CONSTRUCTION (1 KGS. 9:3).
Now for those who criticize
the catholic Church; didn’t God know what King Solomon had done? It becomes
apparent, given the above evidence, that a strictly literal interpretation of
Exodus 20:2–5 is erroneous. Otherwise, we would have to conclude that God prohibits
something in Exodus 20 and he commands the same thing elsewhere.
Why
would God use these images of serpents, angels, palm trees, and open flowers?
Why didn’t he heal the people directly rather than use a “graven image”? Why
didn’t he command Moses and Solomon to build an ark and a temple void of any
images at all?
I hope the fact is becoming
clear now…

ANOTHER OBJECTION BY PROTESTANTS
Many Protestants will claim that, while Catholics may say they do not adore
statues, their actions prove otherwise… Catholics kiss statues, bow down
before them, and pray in front of them. According to the protestants, that
represents the adoration that is due God alone.

OUR RESPONSE:
The problem was not with the bowing; it was with the adoration. Bowing does not
necessarily entail adoration. For example, Jacob bowed to the ground on his
knees seven times to his elder brother Esau (Gen. 33:3), Bathsheba bowed to her
husband David (1 Kgs. 1:16), and Solomon bowed to his mother Bathsheba (1 Kgs.
2:19). In fact, in Revelation 3:9, John records the words of Jesus:
“Behold, I will make those of the synagogue of Satan who say that they are
Jews and are not, but lie—behold, I will make them come and bow down before
your feet, and learn that I have loved you.”  This simply indicates that there are
different categories of “bow” or “worship” as clearly seen in the examples
above. We have the LATRIA which is the adoration due to God alone; this is
clearly different from the relational worship or we give to ourselves to
indicate respect. This is very clear with the Yoruba culture of Nigeria, where
a child prostrates or lies down to greet an elder. This does not mean that he
is rendering the elder a Latria worship or guilty of idolatry, however, it is
just a relational worship which indicates respect. HENCE, WE MUST KNOW THAT THE
IDEA OF “WORSHIP” IS VERY BROAD AND ITS USAGE MUST FLOW WITH THE PROPER SENTIMENT
WHICH INDICATES WHAT IT REALLY MEANS.
My humble recommendation remains that the Catholic Church does not believe any statue or image has any
power in and of itself. The beauty of statues and icons move us to the
contemplation of the Word of God as he is himself or as he works in his saints.
And, according to the Scripture, as well as the testimony of the centuries, God
even uses them at times to impart blessings (e.g., healings) according to his
providential plan.

CONCLUSION
I suppose the message we should send to those outside of the Catholic Church
who don’t get why we bow down before, kiss, put flowers in front of, etc.
statues and icons, is that we Catholics take very seriously the biblical
injunctions to praise and honor great members of God’s family.
Besides, it is however,
surprising that the critics of the Catholic Church take photographs, hang it
at home and often times kiss them. Hence, following the command not to make any
image at all, 99% of them equally guilty of idolatry, if we are to take that
portion of the Scripture so literarily.
For
us, having statues or images is just as natural as—you guessed it—having your
pictures or those of your loves ones, especially those that have departed from
us. Most times we keep these images or pictures of our relations in our wallets
or at homes or even in our electronic devices, which remind us of the ones we
love here on earth.

Hence, our use of images in the Church which reminds us of the heavenly beings
is a far cry from idolatry.

CLICK HERE TO READ: (THE END OF THE OCTAVE OF EASTER (THE EIGHT DAYS SUCCEEDING EASTER); WHY IS IT CALLED AN OCTAVE?)

(SEE ALSO: WHY CATHOLIC PRIESTS DO NOT MARRY)

Biblical Reasons Why Catholics Make Use Of Images....Yes, It Is In The Bible!!! - CatholicShare.com