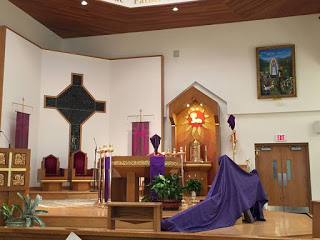 As the Church gradually approaches the commemoration of the death of Christ (Good Friday), certain changes become apparent, which may prompt the faithful to ask certain questions: why is this so? What is the significance? Etc. Among these notable changes is the veiling of the crucifix and holy images in the Church. As with the custom of the Church in many regions, the veiling takes place right from the eve of the Fifth Sunday of Lent. In other words, the veiling ought to have taken effect right from yesterday evening. However, in other regions, the veiling begins with Thursday of the “Easter Triduum” Triduum is a Latin word meaning a space of three days; it a period of three consecutive days on which specified devotions etc. are observed. In this case, the days before Easter, namely, Holy Thursday, Good Friday, and Holy Saturday are referred to as Easter Triduum. 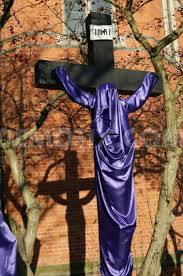 Returning to the issue on ground – veiling; the Catholic Encyclopedia describes this custom as follows: “Before Vespers of Saturday preceding Passion Sunday [i.e. the 5th Sunday of Lent], the crosses, statues, and pictures of our Lord and of the saints on the altar and throughout the church are veiled”. Crosses are unveiled after the Good Friday ceremonies. All other images and pictures retain their covering, no matter what feast may occur, until the Gloria in Excelsis of Holy Saturday.” Neither the Stations of the Cross nor stained glass windows are ever veiled. The bishops’ conference may decide if the veiling during this period should be obligatory within its territory.
Having said this, what can we say to be its significance? Put differently, why does the Church veil the cross and images in these final days of Lent, a time when she is most intent on meditating upon the Lord’s sorrowful passion?
There are two interpretations: the mystical interpretation and the spiritual interpretation.
Abbot Gueranger enlightens us with a Mystical interpretation of the Gospel which, in former times, was read on this Sunday: “As Christ hid himself from the rage of the Jewish authorities (John 8:59), so now he is hidden from the world in preparation for the mysteries of his passion”. Therefore, the presentiment of that awful hour (of our Saviour’s passion) leads the afflicted mother Church to veil the image of her Jesus – the cross is hidden from the eyes of the faithful. The statues of the saints, too, are covered; for it is but just that, if the glory of the Master be eclipsed, the servant should not appear. “The interpreters of the liturgy tell us that this ceremony of veiling the crucifix during Passiontide, expresses the humiliation to which our Saviour subjected Himself, of hiding Himself when the Jews threatened to stone Him, as is related in the Gospel of Passion Sunday (John 8:46-59, They took up stones, therefore to cast at him. But Jesus hid himself, and went out of the temple [John 8:59]). Therefore, the Church begins this solemn rite with the Vespers of the Saturday before Passion Sunday.”
In the case of the Spiritual sense, Dom Gueranger continues to direct us to acts of devotion for the Cross: “Twice during the course of the year, that is, on the feasts of its Invention and Exaltation, this sacred Wood will be offered to us that we may honour it as the trophy of our Jesus’ victory; but now, it speaks to us but of His sufferings, it brings with it no other idea but that of His humiliation.” Considering that, in the season of our Lord’s passion, all the strength of our devotion should be directed to the Cross of Christ, we may be surprised that the images of the Cross are to be covered in these days. However, when we recognize that we now venerate the Cross not so much as an emblem of victory (as in the Triumph of the Cross) but as an instrument of humiliation and suffering, we will soon understand the spiritual realities which are conveyed through the covering of the crosses. This is because in his passion, our Saviour’s divinity was almost totally eclipsed, so great was his suffering. Likewise, even his humanity was obscured – so much so that he could say through his prophet: I am a worm and no man (Psalm 21:7). His face and whole body were so disfigured by the blows and scourges that our Jesus was scarcely recognizable! Thus, the wounds he endured hid both is divinity and his humanity. For this reason, we veil the crosses in these final days of Lent – hiding our Saviour under the sad purple cloth.
Having established these, it would not be out of place to import the explanation of the prominent “angelic doctor” (Thomas Aquinas) of the medieval era about Good Friday and the Eucharist. According to him: “the figure ceases on the advent of the reality, but this sacrament [i.e. the Eucharist] is a figure and a representation of our Lord’s Passion; and therefore on the day on which our Lord’s Passion is recalled as it was really accomplished, this sacrament is not consecrated.” (ST III, q.83, a.2, ad 2). In an analogous way, it is fitting that, as the liturgical year recalls the events leading up to the Crucifixion, the Church should hide the effigies of the Cross from the vision of her faithful.
Kindly share with other Catholics…
Shalom!