WHO IS THE TRUE LUCIFER? THE TRUTH ABOUT “PRINCIPALITIES AND POWER” ARE THEY GOOD OR BAD ANGELS? 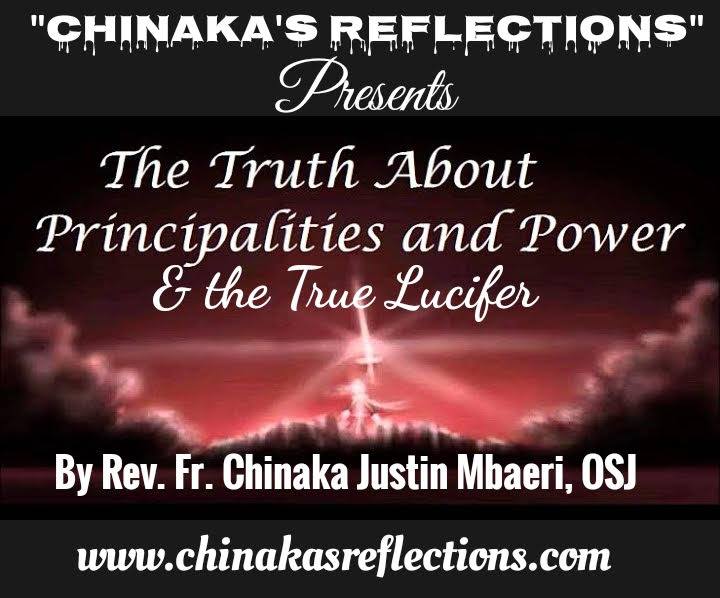 With respect to my post on Facebook yesterday (Feb. 6), regarding the popular error done by many Christians at prayers, referring the Principalities and Powers as the devil (i.e. coming against every principalities and power) in any form of deliverance or spiritual attack. Aside from that, whenever the word “Lucifer” is mentioned, the mind easily focuses on the devil; however, should this be the case? Is the devil still Lucifer? Since these issues revolve around the “nine choirs (or orders/groups) of the angels”, I shall begin by explaining the concept of angels, the devil as he was before his fall, and round up with the concept of the principalities and powers.
To begin with, the word “angel” is coined from the Greek “angelos” which means “messenger”. Given that we do believe in angels from the truth of Scripture and the Teachings of the Church, we define them as pure spirits and personal beings with intelligence and free will. They are immortal beings, greater than humans. As the Bible attests, they appear to humans as apparitions with a human form. There are vast multitudes of them in heaven, known as the heavenly hosts. (Cf. Ps. 68:7, Lk 2:13, Dan 7:10, Rev. 5:11), little wonder God is called “Lord of Hosts” (in Hebrew, “Yahweh Sabaoth”) over three hundred times in the Old Testament (particularly in the books of the prophets) and twice in the New Testament (Rom 9:29 and Jas 5:4).
St. Gregory the Great teaches, based on Saint Paul’s writings, that there are nine orders of angels: “We know on the authority of Scripture that there are nine orders of angels, viz., Angels, Archangels, Virtues, Powers, Principalities, Dominations, Throne, Cherubim and Seraphim. That there are Angels and Archangels nearly every page of the Bible tells us, and the books of the Prophets talk of Cherubim (Ezk 10:14 etc) and Seraphim (cf. Isaiah 6:1-7). St. Paul, too, writing to the Ephesians enumerates four orders when he says: ‘above all Principality, and Power, and Virtue, and Domination’; and again, writing to the Colossians he says: ‘whether Thrones, or Dominations, or Principalities, or Powers’. If we now join these two lists together we have five Orders, and adding Angels and Archangels, Cherubim and Seraphim, we find nine Orders of Angels.” (Hom. 34, In Evang.) St. Thomas Aquinas also teaches the same nine-fold pattern at Summa Theologica I, q. 108.
The devil before his fall was once an angel belonging to one of these nine choirs (orders/groups). He was known as angel Lucifer. It was after his fall that he became satan or devil or any other evil name he could be associated with. In Hebrew, Lucifer is known as “Heyleel” (hey-LEYL), meaning, “Shining one, Morning Star”. The word “lucifer” can also function as an adjective, meaning: “light-bringing”. In Greek, it is known as “heōsphoros” a name, literally “bringer of dawn”, (that is, for the morning star). This reality about angel Lucifer can be found in King James Version of the Bible in “Isaiah 14:12” – “How art thou fallen from heaven, O Lucifer, son of the morning!” Although, this term appears in the literal context (cf. Isaiah 14: 12-17) of an oracle against a dead king of Babylon, who is addressed in Hebrew as “Hêlêl Ben Šāḥar”, rendered by the King James Version as “O lucifer, son of the Morning!” But because of the mention of a fall from heaven, the verse was interpreted by Christians as an allegorical reference to satan, (because satan himself was expelled from heaven and he fell to the earth).
As a result, “‘lucifer’ became a by-word for satan and in popular Christian usage. Against this backdrop, we can say that the devil, before his fall was identified as the “morning star”, “bringer of the dawn”, “shining-one” (that is, lucifer). This is an honourable name because he was privileged to contemplate and participate in the “One True Light”, who is Christ (God) himself (as mentioned by John in his gospel, John 1:1-18). Our Christian legend makes us understand that lucifer was second to God, but the sin of PRIDE led to his fall. After his fall, he became known as satan or devil… However, Our Lord Jesus Christ identified himself as the “MORNING STAR” OR “DAY STAR”, that is, “LUCIFER”, because He is LIGHT Himself. Let us consider these scripture verses:

In Rev 22:16 – “I, Jesus, have sent my angel to give you this testimony for the Churches. I am the Root and the Offspring of David, and the bright MORNING STAR.”
Even St. Peter attributed this title to Our Lord Jesus Christ in
2 Peter 1:19: “We have also a more sure word of prophecy; whereunto you do well that you take heed, as unto a light that shines in a dark place, until the day dawn, and the ‘DAY STAR’ arise in your hearts:”

Having said these, where could we classify the devil as “angel Lucifer” before his fall among the nine choirs of angels? It must be noted that the Seraphim comprehend God with maximum clarity, and therefore their love flames the hottest. “Seraphim” means “the burning ones.” Lucifer (“Light-bearer”/shinning one) was once one of them, for he flamed so brightly from the Divine Light (God); in fact, he was the leader of the Seraphim order, or as our Christian legend would put it, he was the 2nd in command in heaven, that’s why he’s still very powerful and dangerous even after being driven out of heaven. We were told that Archangel Michael and the other angels fought and defeated lucifer and his angels out of heaven (cf. Revelation 12). It becomes apparent that some angels joined him in the battle against God, and today, these angels became his demons etc. who fell on the earth, prowling around and seeking the ruin of souls. It is important to note that after the fall, satan ceases to be Lucifer, for he has stopped shining brightly, that is; he has stopped contemplating the face of God – the One True Light, the true Morn who disperses far the shades of night, the Light whereof every light is born, the pledge of the beatific Light; sadly, satan still glories in that name (Lucifer) because it is an honourable name and goes about sowing confusions in the hearts of the children of God (for he’s a deceiver and the father of lies) that he is still Lucifer. However, God is the TRUE LUCIFER, THE SOURCE OF LIGHT, THE ONE, HOLY, ETERNAL AND TRUE LIGHT, as depicted in the scriptural verses above.

Let us begin with “Powers”. According to Alex Brittain (a convert to Catholicism, apologist and ‘knight’ of the Magisterium), the order of angels called “Powers” (also called Authorities) in Biblical terms are believed to be the forces in heaven, deriving their strength and authority from God. They are responsible to fight the forces of evil that desire to destroy the Creation. It is thus possible to speculate that if satan and his demons were to make an effort to destroy the earth by means manipulating the forces of the Universe, such as through some forms of disaster, the Powers would prevent the enemy from succeeding.

While Principality in biblical language could be understood as a state ruled by a PRINCE (from the term principality), usually a relatively small state or a state that falls within a larger state such as an empire. It is also understood as the position or authority of a Prince. In this light, we could understand that the Principalities are the angels created by God to guard and watch over cities and nations on the earth; in fact, they are the Guardian Angels of nations and cities; put differently, they are HEAVENLY PRINCES who are sent to guard nations and cities on earth. Sadly, there are also evil Principalities (angels) who had joined satan in his rebellion against God, also there are principalities appointed by satan to influence nations and cities for evil (doing the opposite of what the holy principalities do), they are known as the rulers of darkness and wickedness. An interesting example of this occurs in Daniel, chapter 10. Here, the representative angels are called “princes.” In the vision of Daniel, a voice said to him: “The Prince of the kingdom of Persia has been resisting me for twenty-one days, but Michael, one of the CHIEF PRINCES, came to my assistance. I have left him confronting the kings of Persia” –Daniel 10:13. In verse 21 of the same chapter, it reads: “It is to tell you what is written in the Book of Truth. I must go back to fight the Prince of Persia; when I have overcome him, the Prince of Javan will come next. In all this, there is no one to lend me support except Michael your Prince”. This summarily speaks of the battle between the holy and evil principalities.

About the holy principalities, Paul writes: [May] The eyes of your heart [be] enlightened, that you may know what the hope is of the glory of his inheritance in the saints … Which he wrought in Christ, raising him up from the dead, and setting him on his right hand in the heavenly places. Above all principality, and power, and virtue, and dominion, and every name that is named, not only in this world but also in that which is to come. (Ephesians 1:18, 20-21). Here Paul explains how Christ was raised above all the choirs of angels (Principality, virtue, dominion, power etc), sited at the “right hand of God” in heaven. In the letter to the Colossians, he says: “For in him were all things created in heaven and on earth, visible and invisible, whether thrones, or dominations, or principalities, or powers: all things were created by him and in him”. (Colossians 1:16)
The clarity of this Pauline text helps us to understand that these beings were created through Christ and for Him, nothing was created without Him. Christ’s ultimate rule over them expresses the reign of the Lord over all in the cosmos. This is the Lordship of Christ, which reveals God’s tremendous salvation in conquering sin and death at the cross.