WHERE IS “IT” IN THE BIBLE? WHY THE CATHOLIC CHURCH DOES NOT SEARCH IN THE BIBLE FOR ALL HER RELIGIOUS PRACTICES (KNOW AND DEFEND YOUR FAITH)

WHERE IS “IT” IN THE BIBLE?
WHY THE CATHOLIC CHURCH DOES NOT SEARCH IN THE BIBLE FOR ALL HER RELIGIOUS PRACTICES (KNOW AND
DEFEND YOUR FAITH)
Some time ago,
I encountered some Protestants who requested to share the “Good News”
with me I granted them audience; and discovering that I am a Catholic, they
began by throwing this question to me: “Why is it that all your religious
practices are not found in the Bible? I was immediately taken aback by that
question and I simply replied: “Where does Scripture teach that Scripture alone
(Sola Scriptura) is our authority in matters of faith and morals?” If
Scripture makes no such claim for itself, then the doctrine of “Sola
Scriptura” is self-contradictory, and this undermines a central pillar of
Protestantism. To me this question was critical. Unfortunately, I did not get a
persuasive answer from them, then I ended up sharing the Good News with them
with proofs of our Catholic practices and more importantly, the use of Sacred
Tradition.
Hence, for so
many Catholics who may find themselves in my situation tomorrow, kindly read
this post. This post is aimed at correcting the notion of “where is it in
the Bible?” which our separated brethren often use against us whenever
they confront us on our religious practices. However, in as much that we have
been able to prove that our religious practices are biblically inherent, it is
also pertinent for us to know that the Church also makes use of Sacred
Tradition (which is also divinely inspired) inherited from the Apostles.

WHAT
IS SACRED SCRIPTURE AND SACRED TRADITION?
Sacred
Scripture is the Word of God in man’s language, guided by the Holy Spirit. Put differently, It is God’s Word written under the inspiration of the Holy Spirit by men. On
the other hand, Sacred Tradition is the divine Truth preserved and Transmitted
through Apostolic Teaching. The Bible did not drop from the sky; hence, it is
important to recall that, in the first place, there was no Christian Bible
until the late 4th Century, when Pope Damasus I put the Canon of the Scriptures
together, which was ratified at the Councils of Rome, Hippo, and Carthage, and
so we came to have what we call “the Bible” today. Thus, it was from the Sacred
Tradition that the Christian Bible was composed. Therefore, it would have been
impossible for the first Christians to have used “Sola Scriptura”
(SCRIPTURE ALONE), or the Bible Alone as a guide to salvation. It wasn’t until
the 16th Century that this doctrine (where is it in the bible) was invented by
Martin Luther.
As
if St. Paul knows that there would be issues about this in the future, he advises:
“Hold on to th 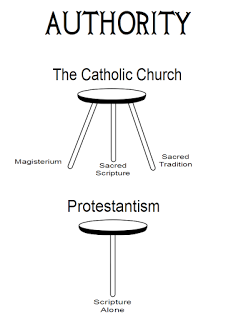 e Traditions which you have received, whether by SPOKEN WORD or
WRITTEN WORD.” (2Thess 2:15). Till date, the catholic Church bears the custody
of both the Sacred Tradition and the Scripture (Oral and written words). This
is the reason we don’t search in the scripture for all our practices. While the Protestants rely on the scripture alone (Sola Scriptura); that is why they keep asking us “where is it in the bible”? Dear friends, when next they ask you this question, kindly ignore them or show them this article, if possible.

Having
said this, it is important to show you some scriptural supports for Sacred
Tradition.
SCRIPTURAL SUPPORTS FOR TRADITION
Let us begin
with the lives of the Apostles…
“…They
were continually devoting themselves to the “Apostles’
Teachings” and to fellowship, to the breaking of bread and to prayer.
(Acts 2:41-42). Paul tells the Corinthians, “I commend you because you
remember me in everything and maintain the‪‎Traditions even as I have delivered them to
you” (1 Cor. 11:2); and he commands the Thessalonians, “So then,
brethren, stand firm and hold to the traditions which you were taught by us, either by word of mouth or by letter”
(2 Thess. 2:15). He even goes so far as to order, “Now we command you,
brethren, in the name of our Lord Jesus Christ, that you keep away from any
brother who is living in idleness and not in accord with the ‪‎tradition that you received from us” (2
Thess. 3:6).
To make sure
that the ‪Apostolic Tradition would be passed down after the deaths
of the apostles, Paul told Timothy, “What you have heard from me before
many witnesses entrust to faithful men who will be able to teach others
also” (2 Tim. 2:2).  In this
passage he refers to the first four generations of apostolic succession—his own
generation, Timothy’s generation, the generation Timothy will teach, and the
generation they in turn will teach.
It is interesting
to see some of the Oral Tradition patterns in the teachings of Jesus. The
beatitudes, for example, have the earmarks of pattern teaching in such a way so
as to enhance the memorization on the hearers’ parts. There is also the
repetition of phrases which separates the points being made such as “You have
heard it said” and “But I say unto you”. Jesus fully intended for His teachings
to be remembered accurately until they would be written down.
DID THE APOSTLES ALWAYS SEARCH THE OLD
TESTAMENT BEFORE MAKING DECISIONS ABOUT THE FAITH? CERTAINLY NO! CONSIDER THIS
EXAMPLE BELOW:
Acts 15: 1-30:
“…But some believers who belonged to the party of the Pharisees rose up,
and said, “It is necessary to circumcise them, and to charge them to keep
the Law of Moses.” The apostles and the elders were gathered together to
consider this matter, and after there had been much debate, ‪Peter rose and said to them, Brethren, you
know that in the early days God made choice among you, that by my mouth the
Gentiles should hear the word of the gospel and believe. And God who knows the
heart bore witness to them, giving them the Holy Spirit just as he did to us;
and he made no distinction between us and them, but cleansed their hearts by
faith. Now therefore why do you make trial of God by putting a yoke upon the
neck of the disciples which neither our fathers nor we have been able to bear?
But we believe that we shall be saved through the grace of the Lord Jesus, just
as they will.” And all the assembly kept silence; and they listened to
Barnabas and Paul as they related what signs and wonders God had done through
them among the Gentiles. After they finished speaking, James replied,
“Brethren, listen to me. Simeon has related how God first visited the
Gentiles, to take out of them a people for his name…”
NOTE – Here the
apostles had to make a decision on whether or not Gentile Christians had to be
circumcised like Jews before being able to be a Christian. The Apostles did NOT
search the scriptures (The Old Testament). Rather, they had a conclave and
invoked the Holy Spirit as their guide.
Acts 10:
9-16:”…Rise, Peter; kill and eat.” But Peter said, “No, Lord;
for I have never eaten anything that is common or unclean.” And the voice
came to him again a second time, “What God has cleansed, you must not call
common.” This happened three times, and the thing was taken up at once to
heaven.”
#NOTE – Peter
actually had it in mind that the Scriptures forbid eating of such animals, but
the Lord wants him to realize that the whole creation has been renewed (not
sola Scriptura), and hands him a Tradition
which has been passed down to this present day. 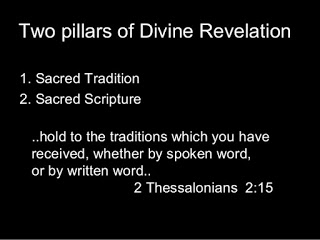 CONCLUSION
Having been exposed to this, we (Catholics) are meant to be proud of our
Heritage and guard it jealously. More importantly, we should count ourselves
privileged because what have been exposed/taught to us have not been taught to
others; and that reminds me of the words of the Psalmist: “…He (God) has
not “dealt” thus with other nations, he has not taught them His decrees”
(cf. Ps. 147)
KINDLY SHARE THIS POST WITH EVERY CATHOLIC YOU KNOW
SHALOM!