REFLECTION FOR WEDNESDAY OF THE FIRST WEEK OF LENT (MARCH 8, 2017) THEME: “THE SIGN OF JONAH – A CALL FOR REPENTANCE IN LENT” 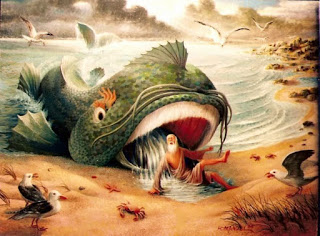 REFLECTION FOR WEDNESDAY OF THE FIRST WEEK OF LENT (MARCH 8, 2017)
THEME: “THE SIGN OF JONAH – A CALL FOR REPENTANCE IN LENT”
Today’s Gospel Reading (Luke 11:29-32) begins with a seemingly harsh expression of Jesus. The portion reads: “While still more people gathered in the crowd, Jesus said to them, ‘This generation is an evil generation; it seeks a sign, but no sign will be given it, except the sign of Jonah’”. A critical mind might want to ask, why should Jesus address the crowd in such manner? Wasn’t He happy that the crowd got bigger, which should indicate a sign of progress in his ministry, winning souls for God?
The concept of “Crowd” has different interpretations in the Gospel according to Mark and Luke. In Mark’s gospel, the crowds are often shown as recognizing God’s presence in Jesus better than the Scribes and Pharisees; however, in Luke’s gospel, they are sometimes shown as people curious to see signs and wonders, without any real commitment to following Jesus. Hence, this was in the context at which Jesus admonishes them. Since they were looking for a sign, He admonishes them and made reference to the sign of Jonah as an example for them to follow. He said: “Just as Jonah became a sign to the Ninevites, so will the Son of Man be to this generation”. What exactly does this mean?
The phrase “sign of Jonah” was used by Jesus as a typological metaphor for His death, burial, and resurrection. The gospel of Matthew makes it clearer; Matthew says: “For as Jonah spent three days and three nights in the belly of the fish, so the Son of Man will be, three days and three nights in the heart of the earth” (Mt. 12:40). As we know, the season of Lent is a period in which we journey with Christ in His temptations and His fast, contemplating His sorrowful passion on the way to Calvary and death on the cross in order to celebrate with utmost joy the Easter festival. Hence, it would not be out of place to say that the season of Lent and the Easter festival reflect the sentiment of the sign of Jonah. Therefore, Christ happens to be telling us today that no other sign would be given to us apart from this penitential period and the subsequent Easter season.
The season of Lent offers us the opportunity to repent and turn to God, just as the Ninevites did when they heard the preaching of Jonah. As the First reading (Jonah 3:1-10) puts it: “Forty days more and Nineveh shall be destroyed!” Nineveh was the ancient capital of the Assyrian empire. This city was used by Assyrian kings as their primary location to rule their territories. Around 631 B.C., the Assyrians dominated many kingdoms that were located in the Middle Eastern region of the world. In fact, they were the political enemies of the Israelites at that time in history, for they also attacked and dealt with the Israelites. They worshiped false gods; put differently, they were pagans. However, when they heard the preaching of Jonah, together with their king, they believed God, proclaimed a fast and all of them, great and small, put on sackcloth and ashes. Little wonder Christ used this pagan territory (who repented immediately they heard Jonah) to criticize the Israelites of his time, who believed they were God’s chosen people; instead of repenting, they looked for a sign.
Apparently, we live in an age of signs and wonders. It appears that the number of miracles achieved by a “man of God” equates his number of followers. The sign of Jonah is a serious lesson for us all today. Do we go about looking for signs and wonders, paying little attention to our salvation? we utilize this season for repentance or do we take it for granted? If we go after signs and wonders and do not utilize this period of forty days for repentance, on the judgement day, the virtuous non-Catholics who did not have the opportunity we have now, may probably stand and criticize us, for they made use of the little opportunity they had and gained salvation; whereas, we who had the basic opportunity misused it.
Therefore, the ashes we received last week on Ash Wednesday should enable us to understand the true meaning of repentance in this Lenten period of prayer, fasting, and almsgiving, just as the Ninevites did.
May the good Lord continually fill us with his grace this period and grant us the strength to persevere in our Lenten resolution, through Christ our Lord. Amen.