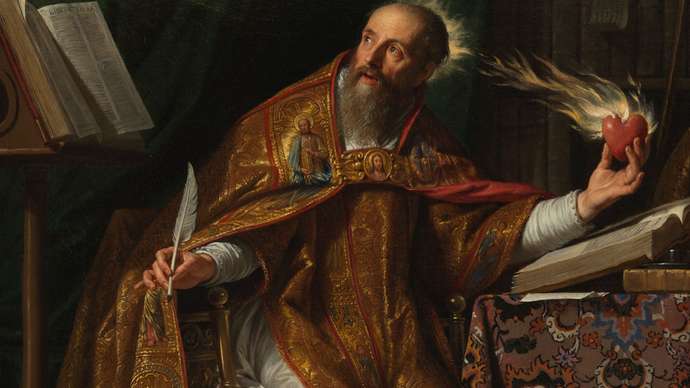 1. St. Augustine was an African – He was born in A.D. 354 in Thagaste, Numidia (modern-day Souk Ahras, Algeria) into an upper-class family, and Latin seems to have been his first language.

3. St. Augustine participated in what St. Paul delicately calls “youthful passions” (2 Timothy 2:22) – When he was 19, he began a long-term affair with a woman. We do not know her name, because Augustine deliberately did not record it, perhaps out of concern for her reputation. She bore him a son, who was named Adeodatus (Latin, “By God Given” or, more colloquially, “Gift of God”). This naming indicates an awareness that, no matter how a child is conceived, and even if the parents did something very wrong, every child is a gift of God. The young Adeodatus was the pride and hope of his parents, possessing an extraordinary mental endowment just like his father, Augustine. When Augustine and Adeodatus’ mother painfully parted ways, young Adeodatus chose to remain with his father Augustine and with Monica, his grandmother.

4. His mother, St. Monica, was chiefly instrumental to his conversion through her daily and persistent prayers, tears, and physically “running after him.” She died a fulfilled woman after her son’s conversion and is currently buried in the church of St. Augustine in Rome. St. Augustine was converted to the Faith when he was thirty-two years of age

5. When Augustine had become a Christian, He was baptized, along with Adeodatus at the next Easter Vigil. St. Ambrose of Milan baptized both of them. Adeodatus was a teenager himself. Their personal and spiritual relationship was a very close one. Adeodatus for Augustine was a wonder – literally a “gift from God.” He said Adeodatus was awe-inspiring and lived a life of such purity that no one needed to doubt his eternal salvation. In the year 387 Adeodatus was present with Augustine and Monica at the port town of Ostia to await a ship back to North Africa. He witnessed the death of Monica, his grandmother. In writing about the event in Book Nine of Confessions, Augustine commented that Adeodatus had to be consoled afterward. The weeping of Adeodatus made Augustine also want to weep, but he held back his own tears until he was alone. The journey to North Africa was then postponed for over a year, which father and son spent together in Rome.

6. Adeodatus accompanied Augustine back to Thagaste, where Augustine began a lay Christian community. Adeodatus was a member of this initial community. Adeodatus appeared in the book by Augustine named De Magistro (“On the Teacher”) as an exceptionally intelligent youth aged seventeen years, and as a close friend of his father. In the year 390 Adeodatus died before reaching his eighteenth birthday. He died at the very same age Augustine had been when Adeodatus was born. The early death of Adeodatus was a number of close deaths that caused Augustine great sadness. His Confessions reveals his numerous tears on various subsequent occasions when his recalling of Adeodatus prompted Augustine to meditate upon God’s plan of salvation, and on the fickleness of human life. Following the death of Adeodatus, Augustine sold almost all his possessions and gave the money to the poor. He did, however, retain the family house, which he later turned into a monastery whose members are popularly known today as “Order of St. Augustine” (Augustinians)

7. In 391, Augustine was ordained a Priest of the diocese of Hippo (now Annaba, Algeria). Augustine did not want to be a bishop so he avoided going to towns where a bishop was needed.  He founded his monastery in Hippo where Valerius was bishop but was immediately made his auxiliary bishop. He was already a bishop in the fifth year of his priesthood. As bishop, he wrote extensively (in fact, he wrote prodigiously), and the value of his writings was such that he became a Church Father.

8. Augustine spent his life fighting the great heresies of the Manicheans, Pelagians, Arians, and Donatists. His challenge of Pelagius on the doctrine of grace accorded him the title: “Doctor of grace.”

9. Augustine is said to have numbered the Ten Commandments (Decalogue) the way we have it today in the Catholic Church (cf. CCC #2066). It was without division prior to the time of Augustine. St. Augustine also worked with St. Jerome on the New Testament Vulgate, and he was largely responsible for the inclusion of Hebrews and Revelation into the Bible.

10. Augustine was the first theologian to say that men and women were both equal and made in the image of God. Augustine taught in North Africa, Rome, and Milan. He published nearly five million words before the printing press.

11. Augustine passed to his heavenly reward on August 28, 430 (hence his feast day of Aug. 28). After his death, he was canonized by popular acclaim – “Vox Populi” (Voice of the People), as the custom of papal canonization had not yet arisen.

12. Together with saints Gregory the Great, Ambrose, and Jerome, Augustine was one of the original four doctors of the Church. He was proclaimed a doctor by Pope Boniface VII in 1298. He was named a doctor because of the extraordinarily high value of his writings, which include major theological, philosophical, and spiritual works. Among his most famous works are:

This is just a tiny selection of what he wrote though… This saintly genius could not stop writing!