TO MY FELLOW CATHOLICS: “CAN I CONFESS MY SINS OVER THE PHONE?” 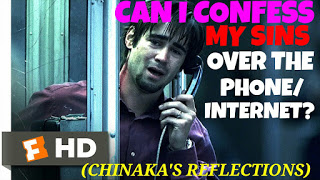 TO MY FELLOW CATHOLICS: “CAN I CONFESS MY SINS OVER THE PHONE?”
I had a recent conversation with one of my “Facebook friends” in which he poured out his grievance in relation to the Sacrament of Confession (owing to my penultimate post). He made me realize how sad he felt when he was about travelling at the airport, called his parish priest on phone and asked for Confession, and the priest turned him down. For him, the world is transforming seriously with advancements in technology and Science, and he believes the Church also should move with the same pace. Even as it is evident these days that many priests do offer prayers for people over the phone or even through Skype calls etc., his problem remains the restriction in confessing one’s sins to a priest over the phone, and for him, Catholic priests are not considerate at all.
At the end of our discussion, he was able to see reasons with me why the Sacrament of Confession/Reconciliation cannot and would not be administered over the phone/internet.
Dear friends in Christ, I want us to understand that Confession is a Sacrament and it is a way of reconciling men with God; thus, this Sacrament cannot be conferred over the phone or over the internet. Let us turn to the Church’s document. According to the “PONTIFICAL COUNCIL FOR SOCIAL COMMUNICATIONS” on the Topic: THE CHURCH AND INTERNET: “The virtual reality of cyberspace has some worrisome implications for religion as well as for other areas of life. Virtual reality is NO substitute for the Real Presence of Christ in the Eucharist, the sacramental reality of the other sacraments, and shared worship in a flesh-and-blood human community. There are no sacraments on the Internet…”
The document above is trying to tell us that the Real Presence of Christ in the Holy Eucharist is the Sacramental reality of other Sacraments. Little wonder the Holy Eucharist is called the SACRAMENT of the OTHER SACRAMENTS; the source and summit of our Christian Spirituality; put differently, the other Sacraments (and in this case, the Sacrament of Confession), draw their vigour from the Sacrament of the Holy Eucharist. Therefore, VIRTUAL REALITY (Virtual reality is an artificial environment that is created with software and presented to the user in such a way that the user suspends belief and accepts it as a real environment. On a computer, virtual reality is primarily experienced through the senses; an example includes: the social communications – WhatsApp, Skype, Viber, Facebook, etc) is not recommended as a medium to receive the Sacraments, because we are talking about the REAL PRESENCE OF CHRIST here.
Furthermore, the sacrament of Confession via technology is INVALID. This has a rich theological meaning. The reason is this: The penitent’s soul (that is the soul of the person seeking for God’s mercy through Confession) is believed to be stained/infected/wounded by sin; thus, he/she must accuse himself/herself of his/her sins in the presence of the minister of the Church (priest – the doctor of souls) acting in the person of Christ who is the merciful judge; this is a personal encounter with the Lord who is MERCY itself. In other words, at confession, the sinner encounters Christ, the fount of Mercy, through the priest. Thus, no Catholic priest would administer this Sacrament over the phone or internet, no matter how friendly or brotherly he may be.
Dear friends, I reiterate again, no confession is valid by long-distance technology (phone/internet). It must be A REAL AND PERSONAL MEETING OF PENITENT AND THE PRIEST. Of course, there are situations where people who are physically present and may have to use some artificial means to speak. Also, a person may use a hearing aid in the presence of the priest in case he has difficulty in hearing. That’s not a problem. It also could be that the person is not immediately close to the priest, but is still within view or earshot (perhaps in difficult circumstances). In that case, the person is still present and absolution is valid. However, if a penitent is physically separated from the confessor, artificial means cannot be used validly to impart absolution.
The act of praying for people over the phone/internet is totally a different issue. I can pray for people even without the use of phone/internet. However, the Sacrament of Confession cannot be done in isolation or in a virtual setting.
To all others who might have reasoned like the man who raised this issue (or may reason like him in the future), these are the reasons why Catholic priests CANNOT hear Confession online or over the phone. A Catholic priest is not autonomous and cannot do whatever he feels, or carry out an act contrary to the Church’s Stand unless he wants to be excommunicated. Catholic priests are guided and directed by the Church’s authority. Therefore, any priest that refuses to hear your confession online or over the phone should be able to explain this clearly to you, so that you won’t have a misunderstanding over the issue.
Shalom!