THURSDAY OF THE FIFTH WEEK OF LENT 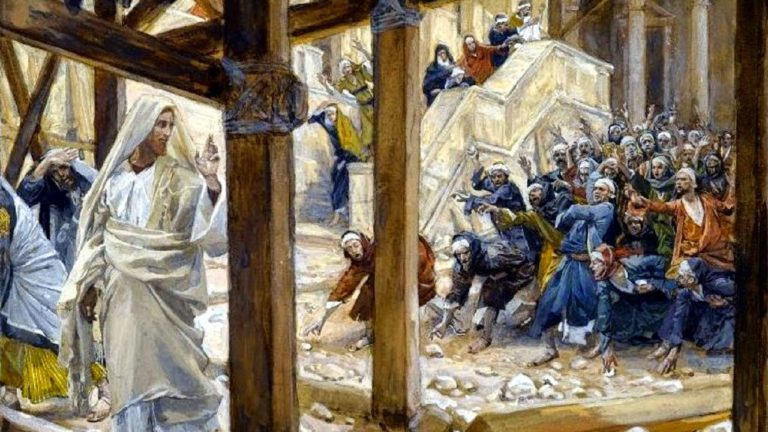 As we approach the Holy Week, we already see a growing hostility against Jesus by the Jews as a result of his teachings. This period, Jesus tends to elude or dodge the Jews who picked up stones in an attempt to kill him. This period, the Crucifix and other images of Christ (and the saints) are veiled as a way of demonstrating mystically, Jesus’ way of hiding himself from the rage of the Jewish authorities. Thus, in our Churches/Cathedrals at this moment, he is hidden (veiled) from the world in preparation for the mysteries of his passion at hand.

In today’s Gospel (cf. John 8:51-59), we read of the attempt to stone Jesus, and the effort he made in hiding himself away from the furious Jews in order to prevent their evil, simply because he made them understand that he is God: “before Abraham ever was, I Am.” Here Jesus proves himself greater than Abraham and equal to God the Father who revealed Himself to Moses in the burning bush with the name YHWH (“I AM”, cf. Exodus 3:14). Ever since their history began, the Jews have never thought of anyone greater than their Father Abraham. Put differently, the Jews regard Abraham as their first Patriarch. Needless to say that the history of the Jewish people began in Bronze Age times in the Middle East when God promised a nomad leader called Abram that he would be the father of a great people if he did as God told him. This is what we see in the First Reading (cf. Genesis 17:3-9). Thus, Abraham is looked upon both as the starting-point or source of Old Testament religion and at the same time, their great Patriarch; so that from the days of Abraham men would speak of God as the God of Abraham. Yahweh, in an apparition to Isaac, also speaks of Himself as the God of Abraham (cf. Gen. 26:24), and to Jacob, He is “the God of my father Abraham” (Gen. 31:42). So, too, showing that the religion of Israel does not begin with Moses, God says to Moses: “I am the God of thy fathers, the God of Abraham” etc. (Exd. 3:6). The same expression is used in the Psalms 47:10 and is common in the Old Testament. While the prophet Isaiah (51:1) speaks of Abraham as “the rock from which the people of Israel were hewn.”

Dear friends in Christ, understanding Jesus as one significant Person predating Abraham and undoubtedly, God himself, would aid our disposition as we step into the Holy Week. Therefore, in celebrating these mysteries of our salvation, we look to Jesus as the One who was with God before the creation of the world (before time began); a God who became man for the good of mankind, and in becoming man, became obedient unto death, even death on a cross (see Phil 2:6-11). This is the extraordinary paradox at the heart of our faith, that Jesus who was crucified and died on the cross is God and was with the Father in the beginning, before the great patriarch Abraham ever existed.

Therefore, if we hear his Word and keep it, we would never taste ‘death’ (eternal damnation), as Jesus rightly says in the Gospel. He is our Lord and God who nourishes us daily by His Word and Eucharist, in order that we might have life in us and not perish. Thus, our appreciation of His Word and Sacraments reaches its apex soon as we contemplate and celebrate his passion, death and resurrection this period. As “children of Abraham” (stated in today’s Psalm 104{105}:4-9), “let us consider the Lord and his strength; constantly seek his face, remembering the wonders and the miracles he has done…” We come to a fuller realization of these by drawing life and vigour from the Sacraments and living out the Word of God we have heard.