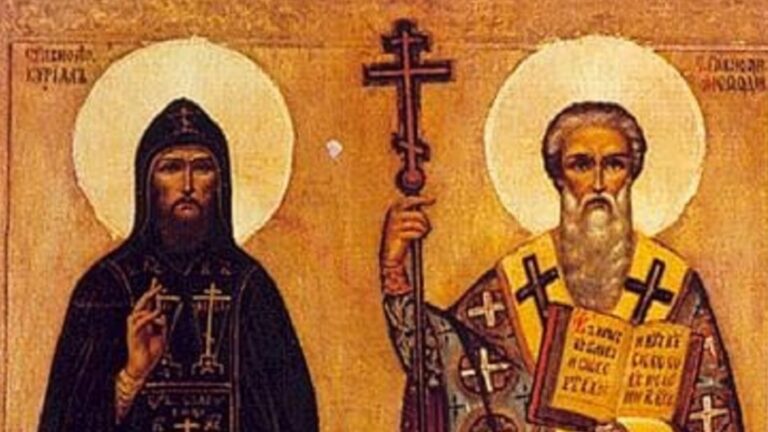 On February 14th, the day of two saints who were brothers and born in the 9th century is celebrated. As a result of their work, Saint Cyril and Saint Methodius are venerated for their educational and cultural mission among the Slavic people.

Our help is in the name of the Lord,
who made heaven and earth.

O Lord hear my prayers,
and let my cry come unto you

God the Father of kindness, enlightened by the missionary ideal of Saint Cyril and Methodius, may we too be clothed with the grace to bring the message of love that flows from the gospel to the most abandoned men and women of our time, bearing witnesses to the life of the gospel in the imitation of saint Cyril and Methodius. through their humble prayers, may we come to enjoy the graces of (name your intentions). Through our Lord Jesus Christ your Son, who lives and reigns with you and the Holy Spirit, God forever and ever. Amen.

Saint Cyril and Saint Methodius, pray for us.

MEDITATION: THE STORY OF THE TWO BROTHERS – CYRIL AND METHODIUS

Both were born in Thessalonica in Greece. Children of an Emperor’s servant. Methodius was 2 years old when his brother, Cyril, was born in Thessalonica in northeastern Greece in 827. Cyril was given the name Constantine at his baptism. Methodius entered the service of the Byzantine emperor and worked faithfully, if without distinction, for a number of years. Constantine studied at the imperial university in Constantinople but refused the offer of a governor’s post and asked instead to be ordained a priest. He was more intellectually inclined than Methodius and spent some years as the official librarian of the most important church in eastern Europe, Hagia Sophia in Constantinople. He taught philosophy for a time at the imperial university and was sent by Patriarch Ignatius on one occasion to the Arabian caliph’s court as a member of a delegation to discuss theology with the pagans.

In the meantime, Methodius had left government service and entered a monastery in Bithynia east of Constantinople. In 856 Constantine also decided to withdraw from the active life of a scholar-churchman and joined Methodius in the same monastery. The brothers’ solitude lasted only 4 years. In 860 they were sent by Patriarch Ignatius to assure the Christian faith of the Khazars in Russia, who were wavering in the face of strong Jewish and Moslem influence. When they were on their return journey, Constantine discovered what he believed to be the bones of an early Christian pope, St. Clement of Rome, and carried them with him for the rest of his life.

Saint Cyril abandoned everything to live a great holy adventure with his brother Saint Methodius. Together, moved by the Spirit, they went to meet the Slavic peoples. Because of this, they got to know Slavic culture deeply. The language, the customs, the love for those people, all this was fundamental for Saint Cyril, together with his brother, to present the living Gospel, Jesus Christ. 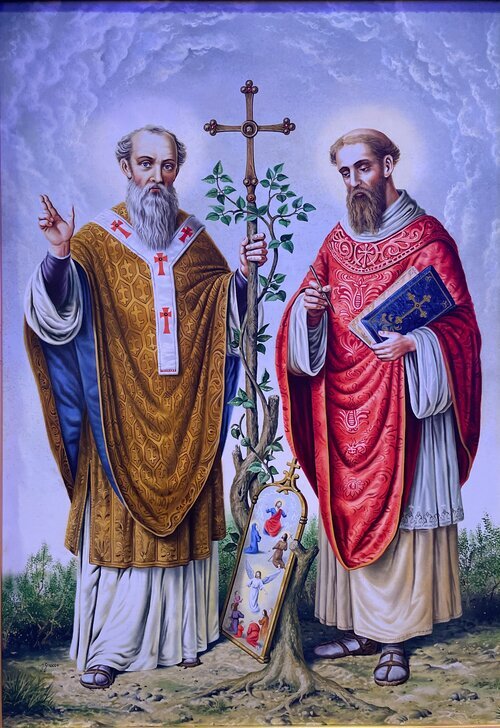 Blessed be Saints Cyril and Methodius. Patrons of Europe, who serve as an example to us with their prayers, ingenuity, and consistent apostolic work, and continue to be, more than a millennium later. Inspirers of fruitful dialogue, harmony, and fraternal encounter between Churches, States, and peoples! May their shining example awaken many imitators in our day too, and create new paths of peace and harmony. Grant this through Christ our Lord. Amen.
Saint Cyril and Saint Methodius, pray for us!
Blessing+

Through the intercession of saints Cyril and Methodius, may the Lord bless + us, protect us from all evil and bring us to everlasting life. Amen.

Saints Cyril and Methodius intercede for us. Amen

Saints Cyril and Methodius , pray for us