THE USE OF INCENSE IN THE CATHOLIC CHURCH: DIABOLIC OR SCRIPTURAL? 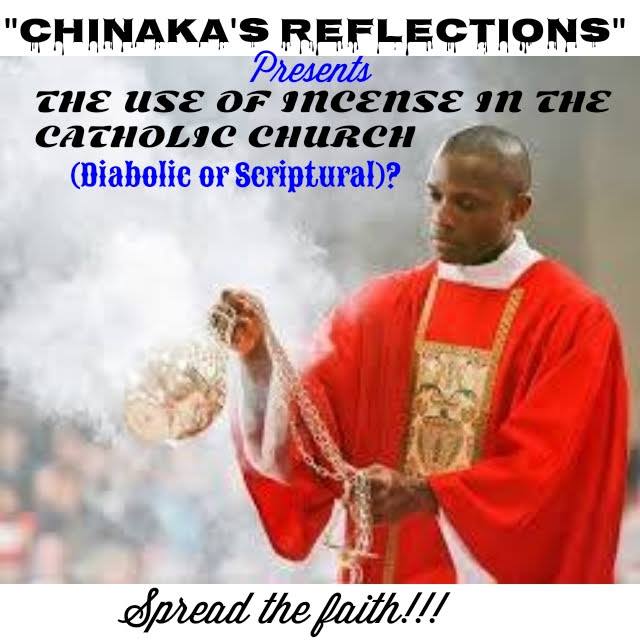 The notion of incense in the Christian parlance, especially used in Catholicism has been greatly misunderstood. Despite the fact that it is used in worship as clearly depicted in Scripture, some persons often jettison it as being archaic or an Old Testament stuff which has been abolished by the New law, or even to the extent of rendering it diabolic, associating it with occultism; thus, condemning the Catholic Church for using it in her liturgical worship (just as I saw in a recent anti-Catholic write-up). This post is aimed at enlightening and clarifying the reader’s mind on the use of incense, illustrating its rich value in the present day liturgy in the Church, and its eschatological significance hereafter.

The word “incense” springs from the Latin “incendere”, which means “to burn”. It is commonly used as a noun to describe aromatic matter that releases fragrant smoke when ignited, to describe the smoke itself, and as a verb to describe the process of distributing the smoke. The use of incense expresses prayer, and it is in fact very scriptural, very Roman Catholic, and very Judeo-Christian. An example can be seen in Exodus 30: 34-38; here we see that the use of incense is being associated with divinity and reserved for God; little wonder the magi from the east presented the gift of frankincense to the newborn Christ (cf. Matthew 2:11). Burning of incense is itself a prayer in action. This is so, because, in Psalm 141, the psalmist prays: “Let my prayer rise before you like incense O Lord”. As Catholics, we express our worship of the Almighty God in words and gestures. Not only does the smoke symbolize the prayers of the faithful ascending to heaven, incense actually creates the AMBIANCE of HEAVEN. The Book of Revelation describes the heavenly worship as follows: “ANOTHER ANGEL CAME IN HOLDING A CENSER OF GOLD. HE TOOK HIS PLACE AT THE ALTAR OF INCENSE AND WAS GIVEN LARGE AMOUNTS OF INCENSE TO DEPOSIT ON THE ALTAR OF GOLD IN FRONT OF THE THRONE, TOGETHER WITH THE PRAYERS OF ALL GOD’S HOLY ONES. FROM THE ANGEL’S HAND, THE SMOKE OF THE INCENSE WENT UP BEFORE GOD, AND WITH IT THE PRAYERS OF GOD’S PEOPLE.” (Rev. 8:3-4). Hence, incense connects us to God’s altar in heaven and allows us to utilize all of our senses in our prayer.

Therefore, in our Catholic usage, we understand that incense adds a sense of solemnity and mystery to the Mass. The visual imagery of the smoke and the smell remind us of the transcendence of the Mass which links heaven with earth, and allows us to enter into the presence of God. That is why I said earlier that the incense connotes an eschatological significance. Little wonder the Church affirms that “the earthly liturgy is a foretaste of the heavenly liturgy which is celebrated in the holy city of Jerusalem toward which we journey as pilgrims, where Christ is sitting at the right hand of God, a minister of the holies and of the true tabernacle”. (Cf. Apoc. 21:2; Col. 3:1; Heb. 8:2.) – “SACROSANCUM CONCILIUM” #no.8 (Vatican II document: Constitution on the Sacred Liturgy)

Dearest friends in Christ, with what we have seen so far, I believe that you would agree with me that the Catholic Church’s use of Incense is very Scriptural and Judeo-Christian; a far cry from diabolism as some anti-Catholic movement depict. If they had read their Bible properly, they would have learnt otherwise.