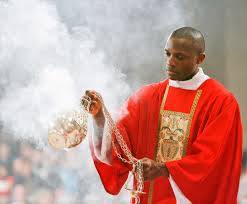 THE SIGNIFICANCE AND PURPOSE OF INCENSE
IN THE CATHOLIC LITURGICAL WORSHIP (WITH SCRIPTURAL REFERENCES)
INBOX QUESTION:
What is the significance and the purpose of incense
during Mass? Also why is it that the Thurifer comes first during the procession
at the Mass; also why do mass servers make use of the processional cross and
candles during the last mass?
RESPONSE:
– ETYMOLOGICAL DERIVATION
– A SHORT SIGNIFICANCE OF INCENSE
– INCENSE IN THE OLD AND NEW TESTAMENTS
– INCENSE AT LITURGICAL CELEBRATIONS (Mass, Funerals,
Benediction etc).
The idea of incense sends a lot of meaning to the
present day man, ranging from the positive outlook to the negative, as being
used by other religious cults. Despite the fact that it is used in worship as clearly
depicted in the Scripture, people often jettison it as being archaic or an Old
Testament stuff which has been abolished by the New law; and thus, condemning
the Catholic Church for using it in her liturgical worship. This article is
aimed at enlightening and clarifying the reader’s mind on the use of incense,
illustrating its rich value in the present day liturgy in the Church, and its
eschatological significance hereafter. This truly affirms that “the earthly
liturgy is a foretaste of the heavenly liturgy which is celebrated in the holy city
of Jerusalem toward which we journey as pilgrims, where Christ is sitting at
the right hand of God, a minister of the holies and of the true tabernacle”. (Cf. Apoc. 21:2; Col. 3:1; Heb. 8:2.) – “SACROSANCUM
CONCILIUM” #8 (Vatican II doc.)
ETYMOLOGICAL
DERIVATION
The word “incense” is derived from the Latin “incendere”,
which means “to burn”. It is commonly used as a noun to describe aromatic
matter that releases fragrant smoke when ignited, to describe the smoke itself,
and as a verb to describe the process of distributing the smoke. Having seen
the etymological derivation, we shall briefly take a look at its significance.

A SHORT SIGNIFICANCE OF INCENSE
The use of incense is an expression of prayer, and it
is in fact very scriptural, very Roman Catholic, and very Judeo-Christian.
There is a recipe for incense in Exodus (30: 34-36), and incense is associated
with divinity and reserved for God (Ex: 30: 37-38). As you will read below,
during Mass we incense both things and people. In the scriptures, ritual
incensing of objects, people and places was for their purification or for
making the object or person holy and worthy of God. So the purpose of incensing
and the symbolic value of the smoke is that of prayer, blessing, purification,
and sanctification.
INCENSE
IN THE OLD AND NEW TESTAMENTS
We read in Sacred Scripture:
“From the farthest east to the farthest west, my name
is honored among the nations and everywhere a sacrifice of incense is offered
to my name, and a pure offering too, since my name is honored among the nations”.
(Malachi 1:11) “Let my prayer rise before you like incense O Lord”. (Psalm 141)
Hence, incense is prayer in action. As Catholics, we express our worship of
Almighty God in words and gestures. Burning of incense is a prayer in itself; a
prayer in action. Furthermore, for Catholics prayer is action, and that action
becomes ever more present through the visual and sensual experience of incense.

Not only does the smoke symbolize the prayers of the faithful drifting up to
heaven, incense actually creates the AMBIANCE of HEAVEN. The Book of Revelation
describes the heavenly worship as follows: “Another
angel came in holding a censer of gold. He took his place at the altar of
incense and was given large amounts of incense to deposit on the altar of gold
in front of the throne, together with the prayers of all God’s holy ones. From
the angel’s hand, the smoke of the incense went up before God, and with it the
prayers of God’s people.”
Hence, incense connects us to God’s altar in heaven
and allows us to utilize all of our senses in our prayer. The use of incense adds
a sense of solemnity and mystery to the Mass. The visual imagery of the smoke
and the smell remind us of the transcendence of the Mass which links heaven
with earth, and allows us to enter into the presence of God. We are called to
be solemn during Mass, not somber –there is a big difference! It helps us to
understand that at Mass we enter into and are united with the worship offered
God in Heaven by His Angels and Saints. If we are told, after all, that the
angels stand amid clouds of incense singing God’s praise in heaven, why
shouldn’t they do the same gathered around the altar, as they are, singing
God’s praise during the Holy Sacrifice of the Mass?
INCENSE
AT LITURGICAL CELEBRATIONS
According to the General Instruction of the Roman
Missal incense may be used during the entrance procession; at the beginning of
Mass, to incense the altar; at the procession and proclamation of the Gospel;
at the offertory, to incense the offerings, altar, priest and people; and at
the elevation of the Sacred Host and chalice of Precious Blood after the
consecration.
1
Incensing the Altar:
The Altar represents Christ and his five wounds. When
we incense the altar at the beginning of the Holy Sacrifice of the Mass, we
directly connect with Christ’s Holy Sacrifice, for this is Christ’s Altar of
sacrifice containing his five wounds upon which his precious body and blood
will be offered.

2 Proclamation of the Gospel:
What are we expressing with this incensing of the
Gospel Book? It is a sign of devotion toward these holy words of and about our
Savior, which have been preserved for nearly 2000 years, in reverence and love.
Catholics firmly believe Christ is present in His word proclaimed, and so we
bless and honor that Word who will imminently be present through His words, the
Holy Gospel. As the sweet smoke (always first blessed by the priest) rises
toward and surrounds the holy book, we are acknowledging: these are the words
that God spoke when He became man and walked on this earth; this is the story
of our salvation; here is the promise of everlasting life; here is the
testimony of God’s love for us.
Offertory.
3. Incense
at offertory (the preparation of the gifts):
I) To bless and to pray for the purification of the
the bread and wine as well as the spiritual gifts the people have mentally
placed on the altar. We offer all our prayers, our joys, our needs, our grief,
as well as our sacrifice of praise and thanksgiving.
II) To bless the Crucifix and Altar (again)
III) To anoint, to bless, and pray for the purification
and sanctification of the priest and the congregation. So as the priest and
deacon prepare the gifts, the people are also properly prepared and blessed.
The incense is pure myrrh which the women carried when they went to the tomb to
anoint Jesus’ body. So in a very real sense when we are incensed during Mass
our bodies have been anointed with the myrrh, and we ourselves have become a
purified offering to God as we offer our gifts, our spiritual sacrifices, our
bodies, our entire being to God through His Son Jesus Christ who will soon
become present on the Altar. After this beautiful blessing, anointing, and
offering of prayer in action, all through incense, we are all now standing as
the priest says: Pray brothers and sisters that our sacrifice (everything we
have just blessed) may be acceptable to God the Almighty Father.
4. Elevation of
the Consecrated Host:
During the consecration, the thurifer moves into place
during the Sanctus (Holy, Holy, Holy) and remain in a kneeling position until
the “Great Amen”. The proper protocol for this would be incense only when the
celebrating priest elevates the consecrated host or chalice. This gives a sense
of our special reverence for the Eucharist, and the importance of the Eucharist
to our prayer life, for incense is prayer in action.
FUNERAL
MASS:
The priest may also incense the Crucifix and the
Paschal Candle. During funeral Masses, the priest at the final commendation may
incense the coffin, for two reasons:
1) As a sign of honour to the body of the deceased
which became the temple of the Holy Spirit at Baptism. That is a very important
concept for Catholics. When the women went to the tomb to anoint Jesus Body
they took with them myrrh. The incense made from pure myrrh gives honor to the
dignity of the human body especially when considered in the context of the
women at the tomb.
2) As a sensual sign of the faithful’s prayers for the
deceased rising to God. It is that beautiful sign of prayer in action.
BENEDICTION
Finally, Incense is used during Benediction and
Eucharistic processions:
It is Christ whom we honor in Eucharistic Adoration
and Christ whom we follow in a Eucharistic procession. Let us consider this
biblical passage: “Another angel came and stood at the altar with a golden censer; and he
was given much incense to mingle with the prayers of all the saints upon the
golden altar before the throne. And the smoke of the incense rose with the
prayers of the saints from the hand of the angel before God” (Rev. 8:3-4).
From what we have seen so far, I dare to
reiterate what I said at the beginning of this post that the earthly liturgical
worship is a foretaste of the heavenly liturgy which is celebrated in the holy city
of Jerusalem toward which we journey as pilgrims, where Christ is sitting at
the right hand of God, a minister of the holies and of the true tabernacle.
HAVE
A BLESSED DAY FILLED WITH THE FRAGRANCE OF INCENSE!!!

CLICK HERE ALSO TO READ: THE SIGNIFICANCE OF THE PASCHAL CANDLE AT EASTERTIDE; WHY DO WE USE CANDLES AT MASS AND OTHER LITURGICAL CELEBRATION?