THE PARABLE OF THE MERCIFUL FATHER: A GOSPEL REFLECTION FOR 4TH SUNDAY OF LENT 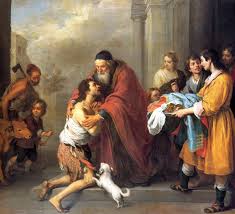 THE PARABLE OF THE MERCIFUL FATHER:
A GOSPEL REFLECTION FOR 4TH SUNDAY OF LENT, YEAR C

This parable throws an in-depth
explanation of this “Year of Mercy” and it makes a lot of meaning in this
season of Lent. I want to center my reflection on the younger son in three stages:

THE
DOWNFALL
(Built on self love and ego)
The son asks for part
of the inheritance while his father was still alive and leaves the house of the
father. His departure is a cruel rejection of the home where he was born and
raised, a break in the way of living, thinking and acting; a betrayal of the
values ​​revered in the family and community. The fault in the conduct of the
son, according to a tradition, was not really leaving the house, but the
squandering of assets in riotous living.

The parable wants to
show the relationship between God and all his children, who, in one way or another,
break communion with Him. The rupture of communion with God and the desired
autonomy always lead to their own destruction, self-destruction.
Reflecting on this, we
discover that God respects our freedom, even knowing the terrible difficulties
and temptations caused by Ambition , Self sufficiency, Lust, Misuse of freedom,
Rage, Resentment, Jealousy, Desire for revenge, Lust, Greed, Rivalries etc.
When the money was
finished and famine sets in, all his friends disappeared, he was left alone to
suffer in shame from the hunger caused by famine and stoop low to the level of animals
(pigs), requesting to share in their food; thus losing his dignity of sonship.

When we turn away from
God, not only we find sorrow, but we set to lose our dignity and destroy ourselves. I become a
prodigal son every time I seek unconditional love which cannot be found. The
figure of the Father who welcomes: his face, his eyes, his hands, shows us
that, whatever our losing, we can always take the road back home.

THE
RETURN
(The decision to return
and the conversion process)
The decision to return
home is not motivated by a filial sentiment but on an empty
stomach gnawed by hunger coupled with a repentant heart. In the perception and recognition of perdition,
follows the resolution to “get up”, to “put oneself in the
foot,” and return to the Father.

He came back with
nothing, no money, health, honor, esteem, reputation, everything had been
dispelled. The point shows the wrong way, hence, the decision to retrace the
path missed, in the opposite direction. Often times, we tend to always think
that God is going to demand an explanation of our conduct, our infidelity and
stuck in feelings of guilt, prepare speeches. The story of the younger son
shows that: there is no situation, no matter how hopeless it may be, that has
no possibility of return. All paths that separate us from God can be traversed
in the opposite direction to return to God. The decision to return is a turning
point in the conversion process and it is only the beginning of a path full of
difficulties and ambiguities.

THE
ENCOUNTER
(The son encounters the
Father and restores communion).
Verse 20 tells the
beginning and the end of the road back the lost son through 3 expressions
describing the father’s behavior (Saw and filled with compassion; ran and
embraced him; kissed him). This shows that the Father was always looking, with
tired eyes every moment towards the direction the younger son left and hoping
for his return some day.

1.      Saw and filled with compassion:
The father saw his son
on the way back to the house, not by coincidence, but because he keeps waiting
around every day; he never ceased to expect his lost son back home. Thus, he
was filled with compassion immediately he sighted his son on the way back; the
past does not matter, the son never ceased to be his son.

2.      Ran and embraced him
Impelled by the inner
dynamism of tenderness and compassion to see his son when he was still far from
him, the father “ran to meet him.” It was the
Father who ran to hug his son fell down to his neck and covering him with
kisses. God’s love for us makes it lose its sovereignty and composure and rush
out to meet us, to embrace us in our dirt in our wounded and profaned humanity.

3.      Kissed him
Kisses are signs of
both affection and paternal tenderness and forgiveness. The Father embraces his
son and kissed him. The son is forgiven and received before saying a word.  The God of our Christian faith we profess in
the creed, the God of Jesus Christ is humble, patient and compassionate. A God
who waits patiently around us and welcomes us with open arms and chest. The
hugs and kisses cover us and restores our lost membership. Thus, the Father’s
love is patient and knows how to wait, and, at the same time, a restless love, that
runs to the son as he returns, to give back the lost membership. The conduct of
the Father is governed solely by the law of love, of gratuitousness. The past
does not matter. The son never ceased to be his son.

And they began to
celebrate …
Forgiveness and Joy
themes are common in Luke’s parables. Party is a sign of full presence of
forgiveness but also full of God’s love. We are invited to join the celebration
with God for the conversion of each person who turns to Him. The festive
banquet is one of the symbols in Judaism to describe the future salvation. The
elder son refuses to join in the celebration because he was not happy about the
way and manner the father received the lost son back home. This is a clear
pointer to us that the ways of God are not ours. When a sinner returns back to
God, heaven rejoices, the angels and saints celebrates, God rejoices solely
because his child was lost and is found.
In this season of Lent of the year of Mercy, God waits patiently for our return, in order to restore our lost dignity… Indeed, his mercy endures forever…

O THAT TODAY YOU WOULD LISTEN TO HIS VOICE, HARDEN NOT YOUR HEARTS!!!