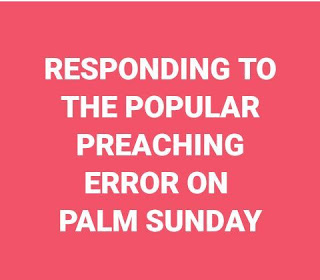 THE CROWD OF PALM SUNDAY ≠ THE CROWD OF GOOD FRIDAY
I grew up with the understanding that the crowd who cheered Jesus with shouts of “Hosanna” on Palm Sunday was the same crowd who shouted: “crucify Him” on Good Friday. This has formed part of the preaching/reflections of many preachers on Palm Sunday till date (as I even observed yesterday).
However, biblical studies and a careful cross-examination of that passage would reveal that the crowds for Palm Sunday and Good Friday are NOT the same. How can we understand this?
To begin with, it is pertinent to note that the trial of Jesus before Pilate took place in Jerusalem where the crowds (i.e. the residents of Jerusalem) did not really know him because He was a Galilean. According to the gospels of Matthew (chapter 27) and Mark (chapter 15), it was the chief priests and the elders that incited the crowd to seek for the release of Barabbas instead of Jesus, and consequently, they shouted: “Crucify him!” According to the gospel of Luke (chapter 23), Pilate summoned the chief priests and the leading men and the people in order to understand the case of Jesus, but in the end, they demanded for the release of Barabbas, and when Pilate tried to release Jesus, they shouted back: “Crucify him! Crucify him!” In fact, the gospel according to John limits the crowd to the chief priests and the guards. John says: “Pilate said, ‘here is the man’. When they saw him, the chief priests and the guards shouted, Crucify him! Crucify him!” (Jn. 19:6).
On the other hand, the Palm Sunday account as narrated in all the four gospels make us understand that this event took place on Jesus’ entry into Jerusalem. According to the gospel of Luke 19:37-38: “and now, as he was approaching the downward slope of the Mount of Olives, the whole group of disciples joyfully began to praise God at the top of their voices for all the miracles they had seen. They cried out: ‘Blessed is he who is coming as King in the name of the Lord! Peace in heaven and glory in the highest heavens!” (The New Jerusalem Bible – study edition). In this case, we see that the crowd is composed of a larger group of the Disciples of Christ from Galilee.
Juxtaposing this fact with the gospel of Matthew, we come to understand better that the crowds were not the residents of Jerusalem, but Galileans who accompanied Jesus and entered the Holy City with him. Let us consider the passage immediately following the Hosanna to Jesus, Son of David: “And when he entered Jerusalem, the whole city was in turmoil as people asked: Who is this? And the crowds answered: This is the prophet Jesus from Nazareth of Galilee” (Mt 21:10–11; The New Jerusalem Bible – study edition). As we can see, the residents of Jerusalem didn’t even know who Jesus was. It was the crowd of disciples following him that answered that He is Jesus from Nazareth in Galilee.
The gospel according to John illumines us better. John said that “the great crowd of people who had come up for the festival heard that Jesus was on his way to Jerusalem. They took branches of palm and went out to received, shouting: “Hosanna! Blessed is he who is coming in the name of the Lord, the king of Israel” (Jn. 12:12-13; The New Jerusalem Bible – study edition). John did not stop there, he went on to say in verse 17 that “the crowd who had been with him when he called Lazarus out of the tomb and raised him from the dead kept bearing witness to it…”
In fact, Pope Benedict XVI (emeritus), a theological scholar of our milieu also argues that they were different crowds. In his book, “Jesus of Nazareth”, he says: “This point is made most clearly in Matthew’s account through the passage immediately following the Hosanna to Jesus, Son of David: “When he entered Jerusalem, all the city was stirred, saying: Who is this? And the crowds said: This is the prophet Jesus from Nazareth of Galilee” (Mt 21:10–11). People had heard of the prophet from Nazareth, but he did not appear to have any importance for Jerusalem, and the people there did not know him. The crowd that paid homage to Jesus at the gateway to the city was not the same crowd that later demanded his crucifixion”.
Therefore, while the crowd of Palm Sunday was composed of the larger group of the followers of Jesus (those who had benefitted from his teachings, miracles, kindness etc.), the crowd of Good Friday (who shouted “crucify him”) was composed of the chief priests, elders of the people and the inhabitants of Jerusalem.
May the Holy Spirit continue to enlighten our hearts and minds as we study the Word of God. Amen.