THE BIG DEAL ABOUT PALM SUNDAY 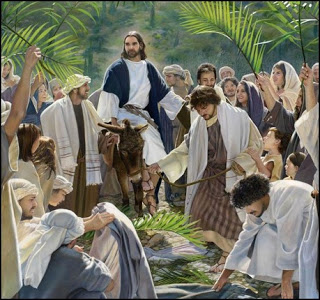 Greetings to you all, my dear friends in Christ!

Palm Sunday (Passion Sunday) is here again for the Year 2020. Virtually every Christian understands that on Palm Sunday, we celebrate the triumphant entry of Jesus Christ into Jerusalem, the week before his death and resurrection; the last Sunday of Lent. For many Christian churches, Palm Sunday, often referred to as “Passion Sunday,” marks the beginning of Holy Week, which concludes on Easter Sunday. Now, if this is what Palm Sunday is all about, what is the big deal? Why do Christians celebrate it till this day? What’s the significance?

The Church celebrates Palm Sunday as a way of delineating Christ’ arrival in Jerusalem, riding a young donkey, while the people greeted him enthusiastically, waving palm branches and covering his path with palm branches and their clothes as an act of homage and submission. St. Matthew puts it succinctly: “The crowds who went in front of him and those who followed were all shouting, ‘Hosanna to the son of David! Blessed is he who is coming in the name of the Lord! Hosanna in the highest heavens!'” (Matthew 21:9). This gesture was a standard practice for individuals of incredible regard. This is because the crowd recognized Jesus as the promised Messiah prophesied in Zechariah 9:9: “Rejoice, heart and soul, daughter of Zion! Shout for joy, daughter of Jerusalem! Look, your king is approaching, he is vindicated and victorious, humble and riding on a donkey, on a colt, the foal of a donkey.”

Now, what is the significance of using a donkey as opposed to the kingly use of a horse, since he was the Messiah, the king of the Jews? The use of donkey has a deep symbolical meaning; it represents the humble arrival of someone in peace, as opposed to arriving in the rage of war with a horse. This characterizes the nature of Christ’s kingship – the Prince of peace. In consonance to this, the shouts of “Hosanna” means “save now”, while the palm branches were also used because it is the symbol of peace and victory. This points to the end of time when people will wave palm branches once again to praise and honour Jesus Christ. The book of Apocalypse clarifies us about this: “After that, I saw that there was a huge number, impossible for anyone to count, of people from every nation, race, tribe and language; they were standing in front of the throne and in front of the Lamb, dressed in white robes and holding PALMS IN THEIR HANDS…” (Revelation 7:9).

Immediately following this great event in the ministry of Jesus, he began his journey to the cross.
In a similar manner, commemorating Christ’s death and resurrection, the Church commences the great event of the Holy Week with Palm Sunday and puts on the red colour which is the colour of blood, symbolizing the redemption paid by Christ’s blood for the world. Therefore, the palm branches are distributed to the faithful who carry them in a ritual procession into Church. The palms are blessed and many people will fashion them into small crosses or other items of personal devotion. Because the palms are blessed, they should not be discarded as trash. Instead, they are appropriately gathered at the church and incinerated to create the ashes that will be used in the following year’s Ash Wednesday observance.

HAPPY PALM SUNDAY TO YOU ALL!!!