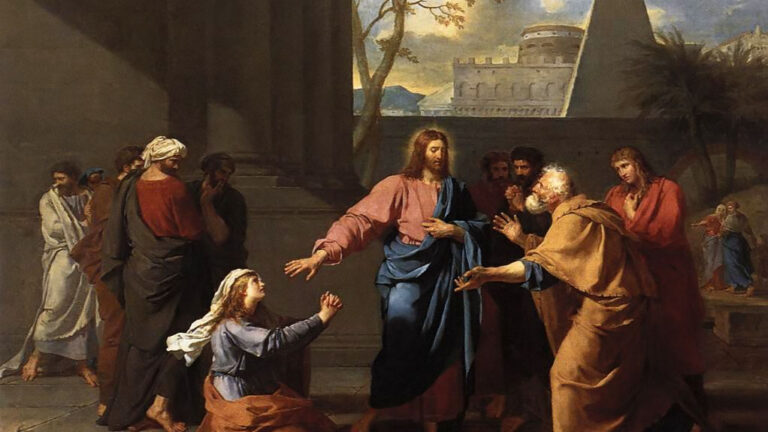 TIME TO GROW IN THE WORD OF GOD

I welcome you to our Sunday Bible challenge which is usually an offshoot of the Saturday of the Word of God in Our Catholic Community Forum (on WhatsApp). This is aimed at helping the Laity transcend the literal and simple biblical understanding to having a better and contextual knowledge of the Word of God proclaimed every Sunday…

This is not a competition, aimed for those who want to have better biblical knowledge. You are to respond according to your own capacity of knowledge (either one or two or all questions). A reward would be given to the overall best. Kindly see the questions and corresponding answers below:

What part of Isaiah was the first reading taken from, and what was the context of the Lord’s project of bringing foreigners to his holy Mountain?

How does the divine project above (in the first reading) relate to our gathering at the Sacrifice of the Mass?

How does the Psalm connect with the First reading?

What situation led Paul to write the second reading to the Romans (11:13-15,29-32) that made him end his epistle this way: “God has imprisoned all men in their own disobedience only to show mercy to all mankind?”

The story of Christ’s encounter with the pagan woman and the consequent miracle can be found in which gospel(s)? and what does the message foreshadow?

What part of Isaiah was the first reading taken from, and what was the context of the Lord’s project of bringing foreigners to his holy Mountain?

The first reading was taken from the third part of Isaiah called Trito-Isaiah enclosed in chapters 56-66. It was written mainly for the Jews who were returning from the Babylonian exile to join their relatives who had been left behind in Judea. Now, today’s lesson is primarily addressed to those Jews who, after the Exile had officially ended, still chose to remain in Babylon as Jews among the Gentiles (Jews in diaspora). In this passage, the Lord God not only pleaded with these people who preferred exile to the labour of returning to the Promised Land to rebuild Jerusalem and the Temple but also tried to make them understand the role the Gentiles would have in their restored kingdom. Though in the past all who came to the God of Israel were required to accept the Law and the Covenant, God’s concern for those outside that Covenant led Him to a new and radical solution. “The foreigners,” which the Lord God declares to us today through Isaiah, “who join themselves to Yahweh, ministering to Him, loving the name of Yahweh and becoming His servants . . . them I will bring to My holy mountain and make joyful in My house of prayer . . . for My house shall be called a house of prayer for all peoples.” Thus Isaiah’s prophecy consoled those Jews who had married Gentiles by assuring them that their God was equally interested in the people of other nations and in the descendants of Abraham. Hence, the exclusivist claims of the Jews as God’s chosen people would have to yield as God made room for others. For besides the exiles of Israel, Yahweh would receive the non-Israelites who had joined themselves to the Lord. In short, the prophet reports, everyone has a part to play in God’s plan — even those who don’t belong to the “true religion.” (Commentário bíblico, Vida Nova – D. A. Carson)

How does the divine project above (in the first reading) relate to our gathering at the Sacrifice of the Mass?

As prophesied by Isaiah, our gathering to celebrate the Holy Eucharist at the Lord’s table is understood as coming to His holy mountain, the heavenly Jerusalem (cf. Hebrews 12:22–24, 28). Therefore, in the sacrifice of the Holy Mass, we form part of the “foreigners” in doing homage to God and nourished at the Lord’s altar with the Eucharist together with the Canaanite Woman of the gospel.

How does the Psalm connect with the First reading?

Today’s Psalmist proclaims God’s blessing on the people of Israel and calls on all nations and peoples to praise Yahweh. We form part of the nations and peoples called to praise God. This was the Psalmist’s way of responding to God’s divine project of the inclusion of the foreigners prophesied in the first reading.

What situation led Paul to write the second reading to the Romans (11:13-15,29-32) that made him end his epistle this way: “God has imprisoned all men in their own disobedience only to show mercy to all mankind?”

The key is to commence from Romans chapter 9. From this chapter through 11, Paul asks how God could apparently go back on His promise to Abraham that Abraham’s descendants would always be God’s chosen people, now that those descendants had rejected Jesus. Paul answers his own question by explaining that God’s plan all along had allowed for the Jews’ rejection of Jesus, so that the few Jews who accepted Jesus and went out to preach the Good News, like Paul himself, would be forced to turn to the Gentiles and bring them into the New Covenant. The Catechism of the Catholic Church makes it clear that God, sometimes, permits evil in order to draw a greater good out of it (cf. CCC #312). Thus, God permitted both Jews and Gentiles to disobey Him so that He could show His mercy by offering eternal life to everyone who wishes to have it. Frustrated by the slow pace of Jewish conversions and prevented from continuing to work directly among the Jews by the overt, physical hostility Jewish synagogues showed him and his companions, Paul directed his preaching missions to the Gentiles, so that the Jews would become jealous and accept Jesus.  Thus, God’s secret plan to invite all people into the Covenant would be revealed and completed. By the statement, “Their rejection is the reconciliation of the world,” Paul meant that the Jews’ rejection of Jesus allowed the world (the pagans, the Gentiles), to be reconciled to God. Paul was convinced that the Jewish nation would eventually accept Christ because God’s” irrevocable” call, given to them through Abraham, was a call to eternal salvation. Paul’s failure to convert his fellow-Jews serves as a model for us who must accept failure in our own lives, especially when it concerns our loved ones who refuse what we judge to be to their advantage. Paul’s message is also a challenge to us to pray fervently and often for the conversion of the Jews.

The story of Christ’s encounter with the pagan woman and the consequent miracle can be found in which gospel(s)? and what does the message foreshadow?

The story of Christ’s encounter with the pagan woman and the consequent miracle can be found in Mark (7:24-30) as well as by Matthew (15:21-28). Both stories of the miracle foreshadow the extension of the Gospel, the Good News, to the whole world.   The woman in today’s miracle belonged to the old Canaanite stock of the Syro-Phoenician race.  The Canaanites were the ancestral enemies of the Jews and were regarded as pagans and idolaters and, hence, as ritually unclean.  But this woman demonstrated a great faith that made Christ applaud her, saying: “Woman, you have great faith. Let your wish be granted.” This took place immediately after Jesus walked on the sea and referred to Peter as “Man of little faith” (cf. Matthew 14:22–33). By granting the persistent request of the pagan woman, Jesus demonstrates that his mission is to break down the barriers and to remove the long-standing walls of division and mutual prejudice between the Jews and the Gentiles. God does not discriminate but welcomes all who believe in Him, who ask for His mercy and who try to do His will.