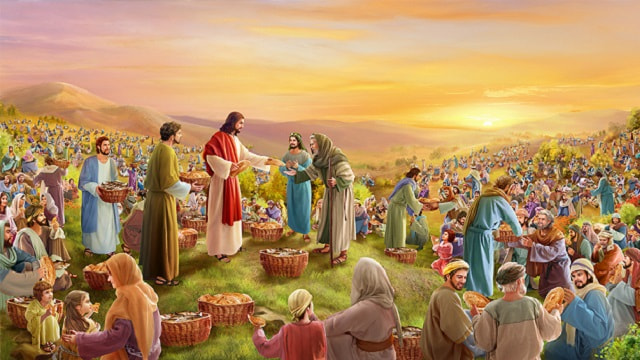 👉🏽 What part of Isaiah was the first reading taken from, and what was the context of the Prophet’s invitation to the people of God to “come and eat” free of charge?

Today’s first reading was taken from Isaiah 55:1-3. Chapters 40-55 of Isaiah belong to the second part of the book of the Prophet Isaiah (deuteron-Isaiah), which record prophecies concerning the end of the Babylonian captivity when the Jews would return to their devastated homeland from slavery. Promising fertility of crops and livestock through His prophet, the Lord God meant to give the people hope and to keep them from losing faith in Him. The people were promised abundant water, grain, milk, wine, and bread — with a renewal of God’s covenant. Isaiah’s prophecy repeatedly assured the people that poverty would not be a barrier to their enjoyment of God’s bounty: “You, who have no money, come.” “Come, without paying and without cost.” “Why spend … your wages for what fails to satisfy?” This would be a reassurance to people who were ashamed of the sins that had led them into exile.  God was telling them that they didn’t have to pay their own ransom, but that He (Yahweh) would do it out of undeserved mercy and love because He had made an everlasting covenant with His people.

👉🏽 When did this prophecy (of Isaiah) reach its fulfillment (immediate and final)?

The prophecy was first fulfilled (immediate fulfilment) when the Jews returned to their homeland and enjoyed God’s favours. However, Deutero-Isaiah’s vision of the messianic banquet was realized (final fulfilment) through Jesus’ actions at the institution of the Holy Eucharist at his Last Supper. The concluding sentence explains why the audience is invited to “eat the finest” and “delight in delicacies.” Today’s miracle of the multiplication of loaves is a sign of the Eucharist. Notice that Jesus performs the same actions in the same sequence as at the Last Supper—He takes bread, says a blessing, breaks it, and gives it (cf. Matthew 26:26).

👉🏽 What was the context of the 2nd Reading (Paul’s letter to the Romans)?

It was in the context of some of the Judeo-Christians (converts) in Rome insisting that the Gentile Christians (converts) observe at least some aspects of the Law of Moses. Paul, on the other hand, argued that it was enough to put one’s faith in Jesus and let God save us through His unearned and undeserved grace. Hence, the Gentile who converts to Christianity had no obligation to keep any aspect of Jewish ritualistic law. Thus, in today’s second reading from the letter to the Romans, Paul answers the question well, if God loves us so much as to save us by unearned grace, why is everything still so difficult? Why are we suffering, bearing the heavy yoke of the mosaic law? Why persecute ourselves or make the other lack food or shelter because he didn’t observe the mosaic law? Paul’s response sounded like a lawyer’s dramatic closing argument in a hard-fought trial when he declares, “neither death nor life…nothing that exists…can ever come between us and the love of God made visible in Christ Jesus our Lord.”

👉🏽 In the event of feeding the 5000, which biblical characters could be alluded to Jesus in his miraculous gesture?

Three notable characters could be spotted here. First, “Jesus is portrayed as a David-like shepherd who leads His flock to lie down on green grass as He spreads the table of the Messiah’s banquet before them (see Psalm 23). Jesus is shown as a new Moses, who likewise feeds vast crowds in a deserted place. Finally, Jesus is shown doing what the prophet Elisha did—satisfying the hunger of the crowd with a few loaves and having some leftover (see 2 Kings 4:42–44).” – Scott Hahn

👉🏽 The scraps remaining were 12 baskets full. What does this signify?