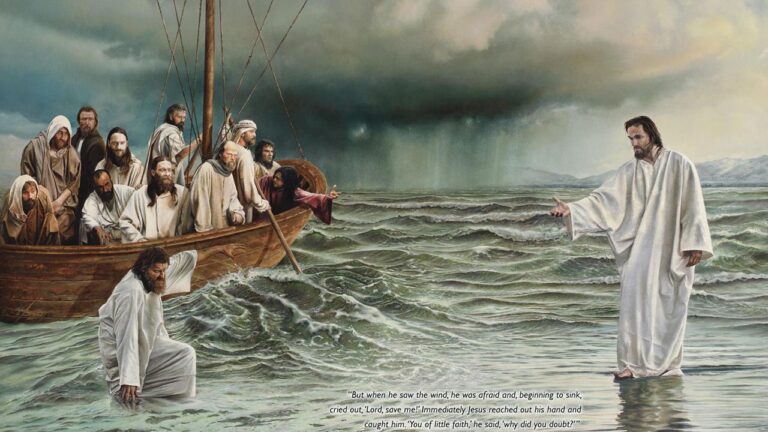 I welcome you to our Sunday Bible challenge which is usually an offshoot of the Saturday of the Word of God in Our Catholic Community Forum (on WhatsApp). This is aimed at helping the Laity transcend the literal and simple biblical understanding to having a better and contextual knowledge of the Word of God proclaimed every Sunday… Kindly see the questions and corresponding answers below:

👉🏽 What was the context of Elijah’s encounter with God at Horeb? What led to it?

👉🏽 Why did Elijah hide his face with his cloak when he felt the presence of God through the gentle breeze?

👉🏽 “I would willingly be condemned and be cut off from Christ if it could help my brothers of Israel, my own flesh and blood.” Why did Paul make this statement in the Second Reading?

👉🏽 Why did they cry out in fear when they assumed it was a ghost?

1. What was the context of Elijah’s encounter with God at Horeb? What led to it?

Following the demise of King Solomon’s (around 922 BC), the nation of Israel was divided into northern and southern kingdoms, with Israel at the north (centred in the city of Samaria), while Judah remained at the south with the Temple in Jerusalem. As years rolled by, many of the Israelites lost their faith in God. Their seventh king Ahab (869-850 BC) married Jezebel, the daughter of the pagan king of Tyre. He allowed her to build a temple for her god Baal, and she lured him to take part in the idol-worship and immorality. It was at this point that Prophet Elijah was sent by Yahweh to Israel to bring His people back to true worship. We are told that this led to an open challenge between Elijah and the Prophets of Baal, with the task of calling down fire to consume their sacrifices, in proving the reality of Yahweh or Baal. In the end, the God of Elijah proved Himself supreme and powerful, while Baal was brought to shame. Consequently, Elijah had all the prophets of Baal slaughtered. When he was about to rejoice in his success for having won King Ahab over, he got a life-threatening message from Jezebel, the wife of King Ahab, and he began to flee. It was in this activity that he encountered God who showed him what true happiness consists of. In this encounter, as illustrated in today’s first reading, Elijah learned that God is not revealed in the impetuous and violent wind, nor in the earthquake, nor in the fire, but in the “sound of a gentle breeze.” This “soft” revelation contrasts with Elijah’s previous interventions. God wanted to comfort his prophet, who seemingly fought in vain, and is now discouraged at the limit of his strength, and no longer seems to understand the ways of God. In that encounter, God’s mysterious presence through His ‘gentle breeze’ restored strength and peace to Elijah’s heart.

2. Why did Elijah hide his face with his cloak when he felt the presence of God through the gentle breeze?

3. “I would willingly be condemned and be cut off from Christ if it could help my brothers of Israel, my own flesh and blood.” Why did Paul make this statement?

To begin with, Paul uses the first eight chapters of his letter to the Romans to describe the blessings which Christ the Messiah, as the fulfilment of “the Law and the prophets,” brought to mankind. In today’s Second reading, Paul was deeply moved and cries out in passionate grief for his countrymen, the Jews, because as a nation they have refused to recognize Christ as that promised Messiah to them by God through their patriarchs and prophets, although they (Jews) remain God’s Chosen People. At this point, Paul shows his determination to make sacrifices for them to come to embrace the gospel of Christ, saying: “I would willingly be condemned and be cut off from Christ if it could help my brothers of Israel, my own flesh and blood. They were adopted as sons, they were given the glory and the covenants; the Law and the ritual were drawn up for them, and the promises were made to them. They are descended from the patriarchs and from their flesh and blood came Christ who is above all, God forever blessed! Amen”

In a nexus with the first reading and Gospel, we could say that as the Jews failed to recognize the presence of Jesus as God and allowed themselves to be distracted, so also Elijah was distracted by the violent wind, earthquake, fire etc., hoping to feel the presence of God there, but God showed him otherwise, that his presence could be revealed in simple and quiet ways, just as He would reveal Himself in His beloved Son in the most simple and humble way, a poor Messiah who would bring forth salvation through his death on the cross. Likewise, the disciples failed to recognize Christ presence as he walked on the water and mistook him for a ghost.

5. Why did they cry out in fear when they assumed it was a ghost?

Taking both questions (4 and 5) together, we can say that in the Jewish folklore, only God could walk on the water, but human beings cannot see God and live. Therefore, if a person thinks he sees someone walking on the water, it must be a ghost! Besides, there was also a superstition that there were monsters at the bottom of the Sea of Galilee and likely that played into their alarm as well. And the way to get rid of ghosts is to shout and scream. This is exactly what the disciples did until Jesus told them, “Take courage; it is I.” even at that, they still doubted it was Jesus, and it was Peter who dared Jesus to prove it was Him by asking Him to command him to walk across the water to meet him. After their conviction was satisfied, they got ashore and worshipped Jesus, proclaiming Him to be truly the Son of God – equal to God the Father.