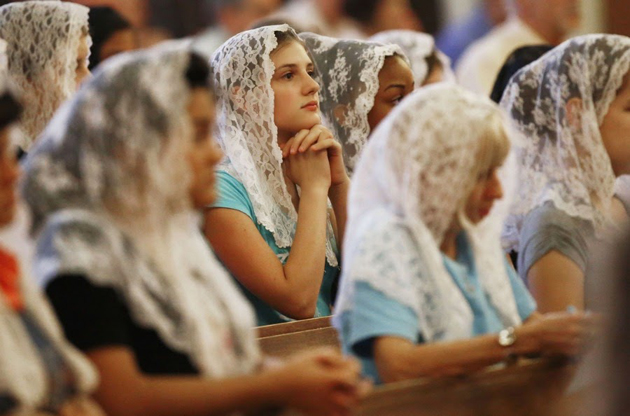 Covering the hairs at worship in Christianity has often been traced to St. Paul. He writes: “For any man to pray or to prophesy with his head covered shows disrespect for his head. And for a woman to pray or prophesy with her head uncovered shows disrespect for her head; it is exactly the same as if she had her hair shaved off. Indeed, if a woman does go without a veil, she should have her hair cut off too; but if it is a shameful thing for a woman to have her hair cut off or shaved off, then she should wear a veil. But for a man it is not right to have his head covered, since he is the image of God and reflects God’s glory; but woman is the reflection of man’s glory. For man did not come from woman; no, woman came from man; nor was man created for the sake of woman, but woman for the sake of man: and this is why it is right for a woman to wear on her head a sign of the authority over her, because of the angels. However, in the Lord, though woman is nothing without man, man is nothing without woman; and though woman came from man, so does every man come from a woman, and everything comes from God. Decide for yourselves: does it seem fitting that a woman should pray to God without a veil? Does not nature itself teach you that if a man has long hair, it is a disgrace to him, but when a woman has long hair, it is her glory? After all, her hair was given to her to be a covering. If anyone wants to be contentious, I say that we have no such custom, nor do any of the churches of God.” (1 Cor 11:4-16).

Now, what was the context of St. Paul? Actually, St. Paul’s reasoning is complex. What does this mean at that time and in that given milieu and what is its significance now? The veil (the palla), was a status symbol in ancient Rome and in Roman colonies such as Corinth, and there were laws governing who could and could not wear it. Furthermore, it offered respectable matrons legal protection. Western-style societies have no such custom of veiling in public and no such delineation of class, and all men and women are potentially protected by law from sexual harassment and assault. Therefore, head coverings today, such as hats or scarves, have none of the symbolism that head coverings had in ancient Corinth, and so there is no valid reason for modern western women to cover their heads when they “pray or prophesy” aloud in church gatherings. This strongly suggests that Paul’s indication in the Church of Corinth at that time was a custom, not a binding norm. However, the custom was borrowed and it became a standing practice along the course of time until it was even included in the 1917 Code of Canon Law requiring women to cover their heads in Church. However, the practice fell away in the late 1960s, well before the publication of the new Code of Canon Law in 1983. The new code no longer has this requirement.

In the 1970s there was a judgment issued by the Congregation for the Doctrine of the Faith in a document titled “Inter Insigniores” that basically stated that since chapel veils were not a matter of faith, it was no longer mandatory for women to wear them. In paragraph 4 it states:

“It must be noted that these ordinances, probably inspired by the customs of the period, concern scarcely more than disciplinary practices of minor importance, such as the obligation imposed upon women to wear a veil on their head (1 Cor. 11:2-16); such requirements no longer have a normative value.”

Consequently, in the 1983 Code of Canon Law—the one in effect today—the canon about head veils was not re-issued. Now, you might be thinking, “Well, just because they didn’t reissue it doesn’t mean that it’s not still in effect, right?” Wrong! Now, Canon 6 of the current code states that all subsequent laws that are not reissued in the new code are abrogated. See citation below:

Can. 6 §1: When this Code takes force, the following are abrogated:

3/ any universal or particular penal laws whatsoever issued by the Apostolic See unless they are contained in this Code;

4/ other universal disciplinary laws regarding matter which this Code completely reorders.

With these canonical indications, head coverings are no more compulsory.

While it is not obligatory for women to wear head coverings in the Church or at worship centers, I personally think the custom is a beautiful and awesome way to indicate decency, mirroring out Our Lady’s decency. If in your respective parishes, women are obliged to cover their heads, it should be culturally understood and respected within that given context, but it is not a Church law today. If you’re a woman contemplating wearing one, I encourage you to go ahead and give it a try. If you are not okay with it and wish to pray, you are free to put it away. Above all, it is not a sin for a woman to uncover her head in the Church or at worship.

“While it is not obligatory for women to wear head coverings in the Church or at worship centers, I personally think the custom is a beautiful and awesome way to indicate decency, mirroring out Our Lady’s decency”. Thanks Fr. Chinaka for this teaching, we learn everyday.

Thanks Padre. Personally, I see it as a mark of reverence and humility. But I don’t condemn who isn’t.
I hope we understand and accept when a particular community says women should wear head coverings

It is worth doing, and I think it is dignifying. In part, it show the respect they have for God and the men, whom, by creation they are meant worship and honour respectively

Thanks alot padre for this answer, God bless you. Please for women is not sin to uncover their head in places of worship and during prayers, what about men is covering of head okay in the place of worship or during prayers. Sorry, I want to be sure that am clear with this.
Thanks padre