CHIDINMA/ATAGA SAGA: REMOVING THE “SUGAR” FROM THE “DADDY” AND THE “MUMMY 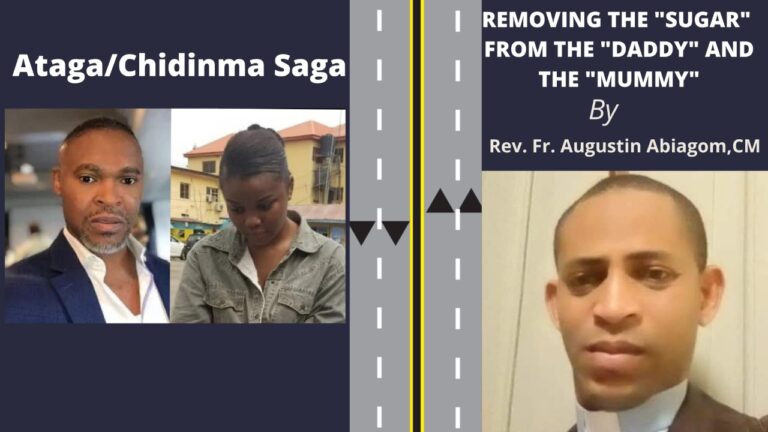 Following the recent saga involving Chidinma, the alleged murderer of Mr. Usifo Ataga, many articles have rented the internet. Below is an edifying piece written by Fr. Augustin Abiagom, CM:

“In recent times the euphemism “Sugar Daddy” has received a lot of attention. I wish to recall our minds to the reality of “Sugar Mummy” as well. Sugar is sweet, and almost everyone enjoys its taste in the mouth. Nevertheless, we also know that adults are advised to reduce their intake of sugar because it could be dangerous to their health.

To simply be a daddy or mummy is enough. The terms father or mother without sugar suggests already the idea of one who represents the figure of a guardian, a mentor, a counselor, and a helper. Prefixing sugar to daddy or mummy makes the notion of daddy and mummy negative.

I was discussing with a lady called Valentina yesterday and she called my attention to something important when she used the phrase, “damaged persons” in talking about several children who grew up in abusive homes and environments where some lacked paternal and maternal care and were even subjected to rape, insults, beatings, starvation … that they became street children at very tender ages.

“The damages in our youngsters can certainly be repaired in a society where every parent or mature adults begin to see the younger ones as their own children in a positive light. I believe from my heart’s depth that no sane father or mother would love his son or daughter to become a nuisance to the society.

But unfortunately today, several adults capitalize on the impoverished conditions of young people (males and females) to exploiting them sexually, and in numerous other inhumane ways possible.

It will be good that a young person calls one daddy or mummy because indeed, such a one plays the authentic role of a father or a mother in the youngster’s life and not because the person is taking advantage of the youngster.

May God help us, adults, not to ruin the lives of the young ones by taking advantage of them.”

WE ARE ONE BLOOD…