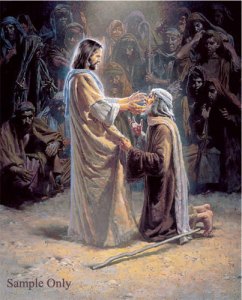 Having been saved from the flood together with his family, Noah offered God a burnt sacrifice, and the Lord made a striking comment about the heart of man in relation to his concupiscence. The First Reading (cf. Genesis 8:6-13,20-22) puts it this way: “The Lord smelt the appeasing fragrance and said to himself, ‘never again will I curse the earth because of man, because his heart contrives evil from his infancy…’” Here, to contrive evil means, to bring about/create/orchestrate/plan/plot evil. This way, God speaks of man as having a ‘wounded humanity’ as a result of the inherited sin of Adam and Eve (original sin). Little wonder, David affirms: “for in guilt I was born, a sinner was I conceived”. (Ps. 51:5). Therefore, even after the flood, the sinful hearts of men did not really change; they were blinded by sin, refusing to acknowledge the place of God in their lives.

Paralleled to this reality, the people at the time of Jesus were so complacent with their sins that they shut their hearts to the truth, refusing to accept Jesus’ good news of salvation despite his miracles, for their comprehension of the Messiah was that of a political and domineering leader. This reality (as we reflected yesterday), was brought about by the yeast of sin. When Jesus cautioned his disciples of this reality (the yeast of sin), they still misunderstood him, and Jesus reacted: “Do you not yet see or understand? Do you have a hardened heart? Having eyes, do you not see? Having ears, do you not hear?” Similarly, in Matthew’s gospel, Jesus said: “for the heart of this people has become dull, with their ears they scarcely hear, and they have closed their eyes, otherwise they would see with their eyes, hear with their ears, and understand with their heart and return, and I would heal them.” (Mat. 13:15). From the foregoing, it follows that once the heart of a man is shut to the truth, the person becomes spiritually deaf and blind, not being able to see and comprehend the good news.

Today’s Gospel Pericope (Mark 8:22-26) of the healing of the blind man in two stages (unique to Mark) symbolizes Jesus’ disciples who were blinded to the identity of Christ, even after demonstrating his power before them by his previous miracles, they still remained blind; maintaining the fixed idea of a nationalist Messiah, dominating the peoples. The gospel tells us that after the first stage of healing, the man’s vision was blurry. So also, at this stage, the disciples were in the process of being healed of their “spiritual blindness”; as such, in the subsequent verses (27-30), Mark will present us with Peter’s profession of faith, confessing Jesus to be the Christ. Here, he “sees” and confesses Jesus’ identity, but then, Jesus begins to tell them that he must suffer, which they don’t fully understand. They see, but not clearly; their ‘vision’ was blurry/cloudy, their understanding was coming slowly in stages.

Dear friends in Christ, cloudy spiritual vision afflicts every Christian to some degrees at one point or another resulting from the heart’s inclination to sin; however, God’s love is greater.  We are called to cooperate with the grace of Christ through the sanctifying powers of the Sacraments; and at times, learning to be patient with the seemingly slow progress (in stages) in our lives and in others. As we partake daily in the Eucharistic sacrifice ‘in the courts of the house of the Lord’, may the eyes of our hearts and minds be opened, recognizing Christ at the breaking of Bread, and offering him a thanksgiving sacrifice, as put forward by the psalmist of today: “A thanksgiving sacrifice I make to you, O Lord.” {Psalm 115(116)}

REFLECTION/HOMILY FOR FRIDAY OF THE FIRST WEEK OF LENT