REFLECTION/HOMILY FOR WEDNESDAY OF THE SIXTH WEEK OF EASTER 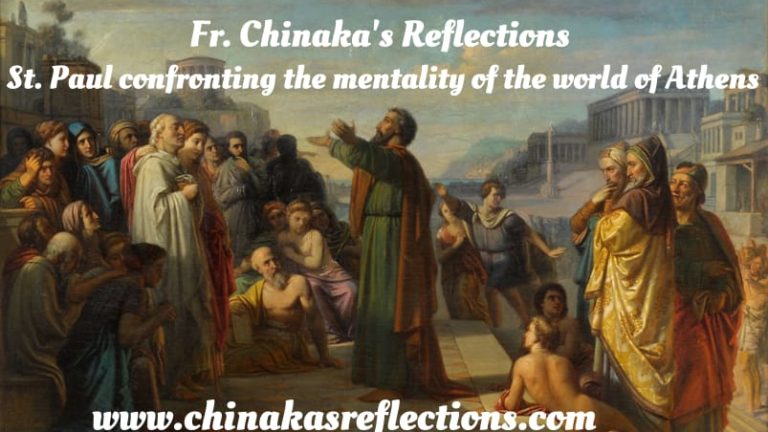 CONFRONTING THE ‘MENTALITY OF THE WORLD’ AS A MISSIONARY

One of the challenges I have encountered as a missionary in Latin America is the cold reaction and somewhat open confrontation of some of the people when I preached against their “common mentality,” that is, what some or most of them indulge in. I vividly remember being threatened and reported to my superiors for preaching against divorce, homosexuality, etc. Sadly, some persons advised me not to preach against these things bluntly because it offends some of the people, as they may end up not going to the Church anymore. Inasmuch as I was scandalized with the advice, I was thrown into a dilemma, whether to continue telling them the truth of the Gospel or to fill their ears and hearts with sugary reflections – what they expected to hear in order to keep them from staying away from the Church; but then, I was strengthened with the words of Peter and the apostles who said, “We must obey God rather than men” (Acts. 5:29). In obedience to God, we allow ourselves to be guided by Him. Being guided by the Spirit as missionaries enables us to walk through history with the “mind of God”, that is, with his way of seeing and judging, feeling and acting. This “mind of God” will often put us in confrontation with the mentality of the world. An example is what we see in today’s first reading.

In the first reading, Paul discovered that the Athenians were very religious, that they knew a lot about religion, that they had been concerned with worshipping all the gods and that, among many mistakes, they had a good inspiration by dedicating an altar “to the unknown God” (v. 23). Their mentality was shallow, they wallowed in ignorance and were unaware of it. The awareness of their ignorance could be a preparation to welcome the revelation of the true God. Nevertheless, for that to be realized, they still needed the Spirit of truth, which is only given through the Risen Christ, just as we hear Christ succinctly in today’s gospel reading: “But when the Spirit of truth comes he will lead you to the complete truth (…) and he will tell you of the things to come. He will glorify me (Jn. 16:13-14).” In Athens, the Holy Spirit, speaking through Paul taught them the explicit truth about their ignorance of the living and true God, and telling them “of the things to come” – that is, “he has fixed a day when the whole world will be judged and judged in righteousness, and he has appointed a man to be the judge” (Acts. 17:31). In “glorifying Christ,” the Spirit inspired Paul, saying: “God has publicly proved this by raising this man from the dead” (v. 31). Sadly, Luke records that “At this mention of rising from the dead, some of them burst out laughing; others said, ‘We would like to hear you talk about this again’” (v. 32). Although, there were those who were prepared to welcome the Spirit of truth (cf. v. 34).

Inasmuch as many did not accept the truth of the Gospel preached by Paul because of their fixed mentality and disbelief in the possibility of rising from the dead, a few of them were converted; and this is what Jesus needs. Jesus does not need the Church to be filled with unfaithful souls who like to listen to sugar-coated homilies and lies, but souls who are ready to listen, understand the truth of the gospel and live by it. The discourse of Jesus on the Eucharist in John 6 explains it all. After many of his disciples abandoned him because of his teaching, he turned and said to the Twelve, ‘What about you, do you want to go away too?’ (cf. Jn. 6:67).

The truth of the gospel is always inspired by the Holy Spirit and is always opposed to the mentality of the world; just as we see in Jn. 16:8 – “And when he [the Advocate] comes, he will show the world how wrong it was, about sin, and about who was in the right, and about judgement.” Through the Good News, prayer, and the Sacraments, our Lord continues to lavish on us the Holy Spirit, leading us to the complete of truth. This Spirit of truth cannot be received by the “world”, that is why He is always opposed to the common mentality of the world. In all these, we should not grow weary or tired in bearing witnesses for Christ as missionaries in a world filled with falsities.

More blessings to you Padre.
Keep it up.