REFLECTION/HOMILY FOR WEDNESDAY OF THE 14TH WEEK IN ORDINARY TIME, YEAR II 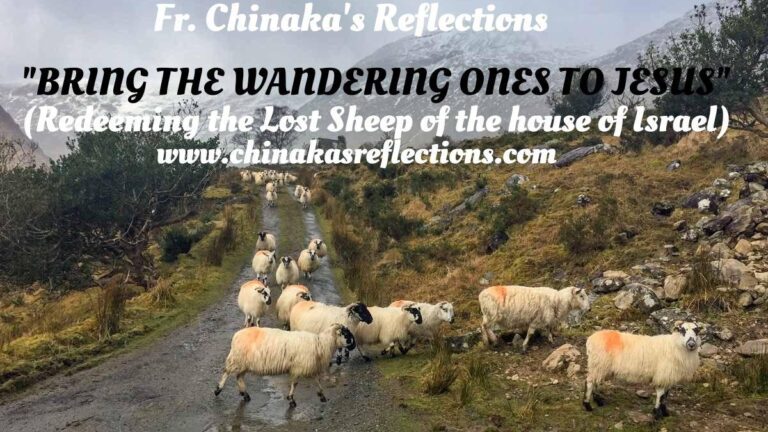 In summoning His 12 disciples for the mission, Jesus asks them to avoid going into pagan territories or Samaritan town but to the ‘lost sheep of the house of Israel.’ Inasmuch as this may portray Christ as a nationalist, nevertheless, there is a reason for it. Among the explanations found in the many pages of Sacred Scripture, the first reading also sheds a light in helping us understand Jesus’ motive

In today’s first reading, the people of Israel are charged with gross corruptions in the worship of God and are threatened with the destruction of their images and altars. They are also charged with corruptions in the administration of the civil government and are threatened with the ruin of that. The reading ends with an invitation to repentance and reform: “Sow integrity for yourselves, reap a harvest of kindness, break up your fallow ground: it is time to go seeking the Lord until he comes to rain salvation on you.” Here, the house of Israel could be apparently seen as the “lost sheep,” in dire need of redemption (also see Ezk. 34:5). Here, God spells out his plan of salvation for the “lost sheep” by asking them to return to Him. this divine plan was fulfilled with the coming of the son of God. This will explain why in the gospel reading, our Lord Jesus Christ plans to redeem the lost sheep of the house of Israel first before extending it to the ends of the earth.

The gospel paints the story beautifully. Here, Jesus summoned his twelve disciples and gave them authority over unclean spirits with power to cast them out and to cure all kinds of diseases and sickness, and with the following instruction: ‘Do not turn your steps to pagan territory, and do not enter any Samaritan town; go rather to the lost sheep of the House of Israel. And as you go, proclaim that the kingdom of heaven is close at hand.’ Notice that Jesus began by selecting 12 men whom he called Apostles (to be sent) for the mission, representing the twelve tribes of Israel. Being Israel’s Messiah, the one who will constitute a new Israel decides to initiate this mission by focusing first on the house of Israel on his Jewish contemporaries. Hence, Jesus’ ministry was to the lost sheep of the house of Israel precisely, because he is the good shepherd come to gather the renewed Israel around himself and to launch their trajectory into the world with the healing grace God always intended to flow through his chosen people. Therefore, we should say the mission of Jesus is first to Israel, and then to the Gentiles (this we later see in Matt. 28:18-20 – great commissioning). With this sentiment, it could be said that Israel was to be the catalyst through which God would accomplish his promises to the world; as such, Jesus had to empower his Apostles to go bring the wandering ones (sheep) of Israel to Him.

Dear friends in Christ, the work of Christ is still ongoing in the world filled with lost and wandering sheep. This task of bringing the wandering ones (lost sheep) to Jesus is the responsibility of all the baptized. Jesus’ project is not limited to Israel but to the ends of the earth. (cf. Matt. 28:18-20); He intends to gather us together even in our unfaithfulness, liberating us from the power of unclean spirits, diseases and sicknesses (as seen in the gospel reading), calling us to Him as He did in today’s first reading, to a life of integrity: “Sow integrity for yourselves, reap a harvest of kindness…”