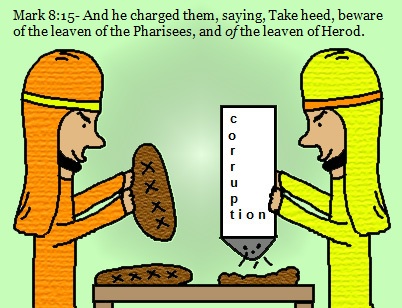 (“You must remove the old yeast of sin so that you will be entirely pure. Then you will be like a new batch of dough without any yeast, as indeed I know you actually are” – 1 Corinthians 5:7)

In Chemistry, we learn that yeast is a fungus that ferments carbohydrates. Put differently, it is commonly used as a leavening agent in baking bread and bakery products, where it converts the fermentable sugars present in the dough into carbon dioxide and ethanol, thus resulting in the fluffy loaves with which we are familiar with. One of the apparent qualities of this substance implies that you only add a little yeast (leaven) to the flour, and it grows and spreads right through the flour. Despite its importance, yeast or leaven is most times used as a symbol of sin or something negative in Scripture. As a metaphor or “shadow”, it is a very small thing that infiltrates and grows. This is exactly the case in today’s readings.

In the First Reading (Genesis 6:5-8,7:1-5,10), We see the cancerous growth of sin like a yeast. When God observed that the wickedness of man was great on the surface of the earth and that the thoughts in his heart fashioned nothing but wickedness all day long, we were told that He regretted having made man on the earth, and thought of wiping out every living being by flood, except Noah who found favour with Him. This was the result of a world ‘leavened’ by sin, reflecting a life outside the garden of Eden, a setting where sin has gone viral.

Similarly, in the Gospel Reading (Mark 8:14-21), Jesus illustrates his message with the concept of the yeast (leaven) of the Pharisees and Herod. These groups of people have become so perverse with sin, which has leavened their minds and heart with ignorance and immorality, such that all they do was to plot the defeat of goodness by exploiting the people. The yeast of the Pharisees corresponded to their idea of a nationalistic and political Messiah, dominating other peoples, while the yeast of Herod corresponded to power without morality, the generator of death. Unfortunately, Jesus’ disciples remained attached to these false ideologies and had difficulties acknowledging the newness of life brought by Jesus through his miracles. Put differently, the people saw the signs (miracles), but they did not see the action of God, they heard magnificent words, but they did not indulge in the liberating message of the Master. As such, Jesus decided to call them to order, beginning with his disciples, taking them into retrospection of the miracle of the multiplication of loaves (a symbol of the Eucharist), and consequently asking them: ‘are you still without perception?’

Dearest friends in Christ, unfortunately, we live in an age leavened by sin that we fail to perceive the goodness of God. Sin, (according to the Catechism), “wounds the nature of man and injures human solidarity” (CCC 1849-1850). A little sin could grow speedily like yeast and spread abroad, and if without being checked, it becomes a societal norm. Unfortunately, the results are clearly seen in our contemporary age. In an age where the yeast of sin had gone viral, Archbishop Fulton Sheen remarked: “the greatest sin of our age is not any particular sin, but it is to lose the sense of sin”. As Christians, it is possible we participate daily in the “Breaking of the Bread” (Holy Eucharist), yet be without a perception of the newness of life brought about by Christ because of the yeast of sin in our hearts. We, therefore, need the grace of Christ – the amazing grace for a sincere “metanoia” (conversion); by so doing, we become beneficiaries of the blessings of God, as stated in the responsorial psalm: “The Lord will bless his people with peace” {cf. Psalm 28(29)}

REFLECTION/HOMILY FOR FRIDAY OF THE FIRST WEEK OF LENT