REFLECTION/HOMILY FOR TUESDAY OF THE NINTH WEEK IN ORDINARY TIME, YEAR II 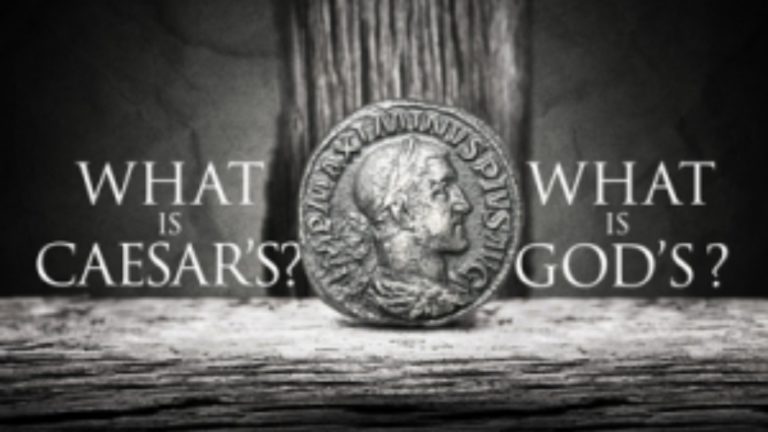 It is common, today, to hear people justify their evil actions with the statement above, which in my opinion, is the most misunderstood New Testament phrase. Unfortunately, some people use it as a justification in perpetuating evil and at the same time being active in religious activities; after all, for them, Jesus said we should “give to Caesar what belongs to Caesar, and to God what belongs to God.” It is quite sad to see Christians divorcing this biblical phrase from its original context making it appear as a mere calendar quote. Today’s readings would help us understand better the context at which the statement was made and what Jesus was actually trying to pass across.

According to Mark in today’s gospel reading, the chief priests and the scribes and the elders sent to Jesus some Pharisees and some Herodians to trap Jesus in what he would say with regards to payment of taxes. The issue of taxes was divisive at the time of Jesus since Rome was an immoral government. While the Pharisees and many other Jews felt it was immoral to pay taxes, the Herodians were on the side of paying taxes. So asking Jesus whether they should pay taxes or not was indeed a trap. They began by flattering him, saying: “Master, we know you are an honest man; that you are not afraid of anyone, because a man’s rank means nothing to you, and that you teach the way of God in all honesty. Is it permissible to pay taxes to Caesar or not? Should we pay, yes or no?” The trap here was a simple one. If Jesus answers “yes, pay your taxes,” then He loses the support of the zealots who are looking to overthrow Roman rule, and then the Pharisees would tag him as a false prophet who deserves to die. If He says no, He loses the support of the Herodians and, possibly, gets arrested by them. However, the evangelist said Jesus saw through their hypocrisy and said to them, “Why do you set this trap for me? Hand me a denarius and let me see it.” They handed him one and he said, “Whose head is this? Whose name?” ‘Caesar’s’ they told him. Jesus said to them, “Give back to Caesar what belongs to Caesar – and to God what belongs to God.” What does this mean?

The first thing to understand is how the idea of an “image” worked in the first century. On our modern monetary coins and notes, the images of authorities are a formality. However, images denoted ownership in Jesus’ day. So, saying “render unto Caesar what is Caesar’s” here wasn’t just a metaphor; it was literally true. Their money had Caesar’s image on it, it marked Caesar’s ownership and authority on who was in possession of it, thus, it belonged to Caesar. Nevertheless, as human beings, we have the image of God in us. We belong to God! Hence, the additional statement: “…and give to God, what belongs to God.” this explains why in the same chapter, Jesus talks of the greatest commandments; first, to love God without reservations, and to love our neighbours as ourselves (cf. Mk. 12:28-34).

Dear friends in Christ, we belong totally to God, and that is why we should love him in an unreserved way by giving (surrendering) ourselves totally to God as a response to his love and ownership of us. We do not belong to “Caesar” or to the evil one that we tend to give ourselves to them at the expense of the values of our Christian faith and end up justifying our claims with “Give to Caesar what belongs to Caesar, and to God what belongs to God.” The Psalmist says that “The earth is the Lord’s and its fullness, the world and all its peoples…” (Ps. 24). This means that the business of rendering unto God what belongs to God involves all creation giving glory to its Creator by living according to the way it was designed; and that is why in today’s first reading, peter exhorts us, saying: “You should be living holy and saintly lives while you wait and long for the Day of God to come when the sky will dissolve in flames and the elements melt in the heat (…) So then, my friends, while you are waiting, do your best to live lives without spot or stain so that he will find you at peace.” This is what it means to give to God what belongs to Him; it does not mean perpetuating evil and remaining under the fold of Christianity at the same time.

Inasmuch as we are obliged to respect and obey civil authorities by giving to Caesar, nevertheless, we should not obey them at the expense of our obeying God, as the Catechism of the Catholic teaches:

“The citizen is obliged in conscience not to follow the directives of civil authorities when they are contrary to the demands of the moral order, to the fundamental rights of persons or the teachings of the Gospel. Refusing obedience to civil authorities, when their demands are contrary to those of an upright conscience, finds its justification in the distinction between serving God and serving the political community. ‘Render therefore to Caesar the things that are Caesar’s, and to God the things that are God’s.’ ‘We must obey God rather than men’”

As we give our whole lives to God, may His grace continually accompany us in order to persevere to the end and become recipients of what “God promised: the new heavens and new earth, the place where righteousness will be at home,” as stated in the first reading.