REFLECTION/HOMILY FOR THURSDAY OF THE 12TH WEEK IN ORDINARY TIME, YEAR II 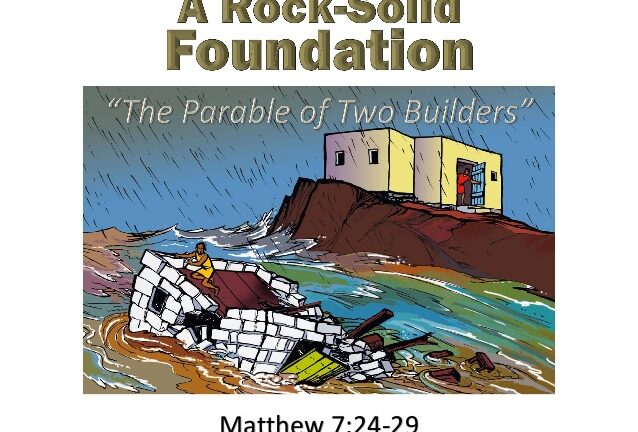 ON CHRIST THE SOLID ROCK, I STAND. WHAT ABOUT YOU?

The 19th-century Christian hymn: “My Hope Is Built on Nothing Less” written by Edward Mote in 1834 (being the best known of his hymns) refers to the Parable of the Wise and the Foolish Builders (see. Mt. 7:24-27), in connection with the metaphor of Christ as the Spiritual Rock (see 1 Corinthians 10:4). The refrain of that hymn: “On Christ, the Solid Rock I stand, all other ground is sinking sand…” can be said to summarize our today’s message.

Apparently, we have heard and seen cases of collapsed structures/buildings either during construction or shortly after construction, and sometimes also affecting other lives and properties around, owing to the poor building materials, resulting in a weak foundation, or building the structure on the wrong site/location where it shouldn’t have been built at first, of which after experiencing erosion or heavy storm, etc., it readily collapses. The same applies to our spiritual lives as well. If we do not live out the Word of God we hear on a daily basis, then we would be resting on a weak foundation (sinking sand), heading for a spiritual collapse in times of adversities, trials, tribulations, etc., and probably affecting the spiritual lives of those around us. The reverse would be the case if we put God’s Word into practice; here, we would be established upon Christ the Solid Rock, and remain firm in the time of adversities and trials.

For the so many times that we had failed to establish our lives on Christ, the Solid Rock, we are called to pray like the Psalmist of the day: “O God our saviour, come to our help. Come for the sake of the glory of your name. O Lord our God, forgive us our sins; rescue us for the sake of your name.”

Amen … On Christ the solid rock I stand