REFLECTION/HOMILY FOR THE SOLEMNITY OF THE ASCENSION OF THE LORD 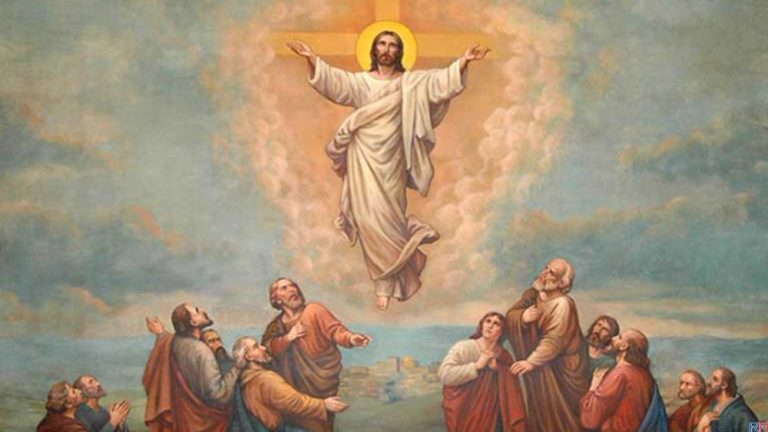 Part of the Creed which we profess every Sunday and other days of solemnities: “He ascended into heaven” is what we celebrate on Ascension Thursday, forty days after the resurrection of Christ. But then, why forty days and why does the Catholic Church give more attention to a single act done by Jesus (ascension), since he has conquered death and redeemed us by his death and resurrection?

After his resurrection on Easter Sunday, Jesus appeared to his disciples over a period of forty days. Luke the evangelist clarifies us better. According to him, forty days after the resurrection, Jesus and His disciples went to the Mount of Olives, near Jerusalem. There, Jesus promised His followers that they would soon receive the Holy Spirit and instructed them to remain in Jerusalem until the Spirit had arrived. Then, while Jesus was blessing them, He began to ascend to heaven (see Luke 24:50-51 and Acts 1:1-11). Thus, the Ascension of the Lord Jesus happened forty (40) days after Easter Sunday, falling, therefore, on a Thursday, exactly six weeks after Holy (Mandy) Thursday, when Jesus celebrated the Last Supper with the disciples, washed their feet, and was betrayed by his apostle, Judas Iscariot. Having established this, how then can we understand the Ascension? What is its significance?

The Catechism of the Catholic Church summarizes it in three points, viz:

#665 Christ’s Ascension marks the definitive entrance of Jesus’ humanity into God’s heavenly domain, whence he will come again (cf ⇒ Acts 1:11); this humanity in the meantime hides him from the eyes of men (cf ⇒ Col 3:3).

#666 Jesus Christ, the head of the Church, precedes us into the Father’s glorious kingdom so that we, the members of his Body, may live in the hope of one day being with him forever.

#667 Jesus Christ, having entered the sanctuary of heaven once and for all, intercedes constantly for us as the mediator who assures us of the permanent outpouring of the Holy Spirit.

Drawing our inspiration from the existing backdrop, it becomes pertinent to say that Christ’s Ascension was the culmination of God’s divine plan for Christ Jesus – his return to his Father with his “Mission Accomplished.”  Ascension is the grand finale of all his words and of the works he has done for us and for our salvation.  It is a culmination, but not the conclusion. It is a new beginning. It is an act that brings hope to humanity and a great yearning for our heavenly homeland. Since the Christian faith is essentially the hope for the future of humans promised by the resurrected Christ; therefore, the ascension is an attitude of expectancy that underlies our faith.

It is interesting to also note that the ascension brings about a paradoxical insight: Christ ascending to the Father, and remaining with us at the same time, till the end of times. What we celebrate today is Jesus’ exaltation and the end of his earthly existence, as a prelude to the gift of the Spirit.  The ascended Jesus is still with us because of his promise, “I am with you always; yes, to the end of time.” (Matthew 28:20)

The liturgical readings give more meaning to this feast. In the first reading (cf. Acts 1:1-11), Luke gives an account of the event of the Ascension as recorded in the first chapter of the Acts of the Apostles. First, Jesus instructed his apostles to remain in Jerusalem and wait for the outpouring of the Holy Spirit so that they might become his “witnesses to the ends of the earth.” Then a cloud took Jesus from the sight of the disciples and two heavenly messengers in white garments gave them the assurance of Jesus’ return in glory.  The responsorial psalm which was originally sung in connection with a cultic procession honouring the Ark of the Covenant already foretold the Lord’s Ascension: “God goes up with shouts of joy; the Lord ascends with trumpet blast.” (Ps. 46[47]: 2-3,6-9). This celebrates God’s universal kingship; a God who “mounts his throne” in glory. The message continues in the second reading in a more dynamic way, contemplating the Ascension as hope for the future of humans promised by the resurrected Christ (cf. Eph. 1:17-23; alternate Eph. 4:1-13 or Hebrews 9: 24-28;10: 19-23): In Ephesians, Paul explains the theological meaning of Jesus’ exaltation by saying, “May God enlighten the eyes of our hearts so that we may know the great hope to which we have been called.” Our great hope is that someday, we too will be ascending to the heavenly glory, provided that by his grace, we live out our faith in Him by observing the commandments of love that he entrusted to us.

It is worthwhile to note that in the custom of the Extraordinary Form of the Roman Rite (the Tridentine Mass), the Pascal Candle is extinguished after the Gospel during the Mass of Ascension Thursday. In this ritual context, the candle symbolizes the presence of the glorified risen Christ. It is therefore logical, in the extraordinary form, to extinguish the candle at the Ascension, after which it is removed from the sanctuary at the end of the Mass. Nevertheless, the Ordinary Form of the Roman Rite (Novus Ordo) which we celebrate today indicates a wider use of the Paschal Candle throughout the entire season of Easter until Pentecost.

The Ascension is most closely related, in meaning, to the mystery of the Incarnation as clearly explained in Catechism #661. Thus, at the incarnation, the human and the divine natures become united in the one Person of Christ; and it was this very Person – the resurrected body of Christ that ascended into heaven and became for all eternity a part of who God is.  It was not the divine nature of Christ that ascended to the Father. It was the Person of Christ, true God, and true man; a body that the disciples had touched, a body that had eaten and drank with them both before and after His Resurrection, a real, physical, but gloriously restored body, bearing the marks of nails and a spear.  This was what ascended.  This is what, now and forever, is a living, participating part of God.

What message does the ascension bring to our doorstep? “Preach the good news and be my witnesses”. We need to be proclaimers and evangelists. In today’s gospel, Jesus gives his mission to all the believers: “Go out to the whole world and proclaim the gospel to every creature.”  This mission is not given to a select few but to all believers. To be a Christian is to be a proclaimer and an evangelist. There is a difference between preaching and proclaiming. “We preach with words but we proclaim with our lives.” As we celebrate the Lord’s return to His Father in heaven – His Ascension — we are being commissioned to go forth and proclaim the Gospel of life and love, of hope and peace, by the witness of our lives. On this day of hope, encouragement, and commissioning, let us renew our commitment of being true disciples everywhere we go; while at the same time bearing in mind that our Lord has gone to prepare a place for us, so that where he is (the head of the Church), we too (the body) may be (cf. John 14:3).

Dear friends in Christ, the Ascension is a holy day of obligation – it ranks the same as Sunday. Therefore, we are obliged to keep it holy as Sunday by attending Mass, and if possible, rest from servile works.

Above all, a few days from now, we shall commemorate the outpouring of the Holy Spirit upon Mary and the Apostles, upon the church, upon our families, and upon each and every one of us. As the disciples of Christ returned to the upper room united in the spirit of prayer for nine days (novena) anticipating the advent of the Holy Spirit; we too are encouraged to participate in the Novena to the Holy Spirit which begins on Friday following Ascension Thursday. By the Holy Spirit, we become enlivened, and our actions become animated in a new way, making us “Christs” in the world. We pray and ask the Holy Spirit to continually enlighten our minds and hearts to see what hope his call holds for us in living out the message of the ascension.

Have you prayed the Rosary today?