REFLECTION/HOMILY FOR THE SOLEMNITY OF SAINTS PETER AND PAUL, YEAR A 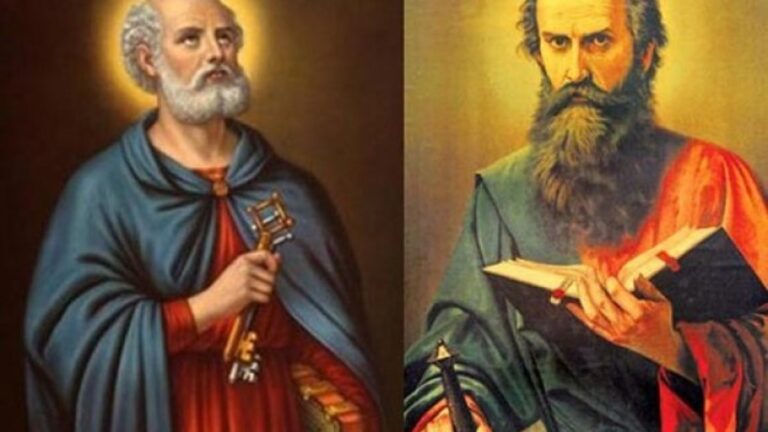 CALLED TO LIVE OUT THE FAITH OF PETER AND PAUL, PRINCES OF THE APOSTLES AND THE PILLARS OF THE CHRISTIAN CHURCH

“These are the ones who, living in the flesh, planted the Church with their blood; they drank the chalice of the Lord and became the friends of God.” The preceding sentence is the Entrance Antiphon of the Roman Missal proposed today for the Solemnity of Saints Peter and Paul admirably summarize the lives of Saint Peter and Saint Paul. The Church calls them both “coryphaeus” (Greek, ‘κορυφαῖος,’ ‘koryphaîos,’ from ‘κορυφή’ ‘koryphḗ́,’ – ‘the top of the head’), a term attributed to the leader of the chorus in the ancient Greek drama. This term (sometimes in an Anglicized form “coryphe”) is used for the chief or leader of any company or movement. This sentiment clearly reflects the personalities of Saints Peter and Paul in their responsibilities as leaders, heads, columns; and indeed, they are, because in their apostolic roles, they bore witnesses to the risen Christ, setting good examples as leaders. Their preaching planted the Church, which lives on the testimony they gave. Thus, since the third century, the Church’s Liturgy has united these two columns of the Church, Peter and Paul, in the same celebration. What really can we say of these two men? What examples did they lay? What importance have their feasts in the Church and our spiritual lives?

The apostle ‘Peter’ (stone, rock, firmness), a native of Bethsaida, where he was a fisherman (cf. Jn. 1:44) was the first Pope (cf. Jn. 21:15-17; Matthew 16:18-19) as depicted in today’s gospel reading through his inspirational profession of faith and with what Christ said of him, together with the responsibilities (keys of the Kingdom of heaven – the power to bind and loose) He gave him. Through this reality, we have the reference and guarantee of the unity of Catholic Christians and the deposit of faith. Jesus called him and entrusted him with the mission to guide and confirm the brothers in the Faith (cf. Luke 22:32; Jn. 21:15-17). He was one of the first witnesses of the risen Lord and, as a herald of the Gospel, he becomes aware of the need to open the Church to the Gentiles (cf. Acts 10-11). And in the next chapter when the Church faced persecution at the hands of King Herod, Peter was arrested and kept in prison until his miraculous release, as illustrated in today’s first reading.

The apostle Paul of Tarsus was a fierce persecutor of the Church who was converted and called by our Lord Jesus Christ himself to build and ‘spread the Church in the pagan world,’ as we hear from today’s second reading. Here, he speaks of his fidelity to his calling in the midst of the difficulties and the consequent reward he stands to gain at the end of his earthly life. Scripture makes us understand that he travelled the Mediterranean world to announce the Gospel of salvation, especially to pagans, and supporting them (the communities) with his epistles that form a greater part of the New Testament.

After having suffered all kinds of persecutions, Tradition tells us that both Peter and Paul were martyred in Rome; watering that land with their blood, they “planted” the Church of God. Given the scriptural evidence of their lives and missions, we learn that both lived deeply what they preached: they preached Christ with word and life, all giving for Christ. Peter rightly said: “Lord, you know everything; you know that I love you” (John 21:15-17). Paul also exclaimed: “For me, to live is Christ” (Philippians 1:21) “I have been crucified with Christ and yet I am alive, yet it is no longer I, but Christ living in me.” (Galatians 2:19-20). Indeed, these two men demonstrated their passionate love of Christ. This passionate love led them to spill their blood for Christ. Indeed, “they drank from the Lord’s chalice and became friends with God.” This is, in fact, the greatest of all the honours and all the glories of Peter and Paul: drinking from the Lord’s chalice, participating in his sufferings and death. That is why they are models for all Christians; and as a result, we celebrate with joy and solemnity their glorious martyrdom.

Dearest friends in Christ, throughout the history of the Church, we have had many who have gone through similar experiences of Saints Peter and Paul. Even in the most hostile milieus, the testimony of Christians did not remain silent, the Church remains solidary and prophetic. God always comes to our aid, makes himself present, takes care of each one of us, listens to us, does not abandon us; as was the examples of Peter and Paul as presented to us scripturally.

Today, we remember to pray for the Holy Catholic Church ‘built on the rock’ by our Lord Jesus Christ; we pray for the intentions of our Holy Father, Pope Francis, and all who hold and teach the Catholic faith. May God grant them all the firmness in faith, constancy in charity, an invincible hope, and good health of mind and body in their daily missionary works to always present Christ to the world and bear witnesses for him. And to the rest of the flock of God; may by imitating the lives and examples of Saints Peter and Paul, they may also remain faithful until death in professing and living of the Catholic faith, which, in the name of our Lord Jesus Christ, the Holy Apostles (Peter and Paul) poured out their very blood.

To the Lord, the King of the Apostles and martyrs and who gives the strength for martyrdom, be glory, honour and praise forever and ever. Amen.

Amen Saints Peter and Paul, pray for us