REFLECTION/HOMILY FOR THE FEAST OF THE TRANSFIGURATION OF THE LORD, YEAR A 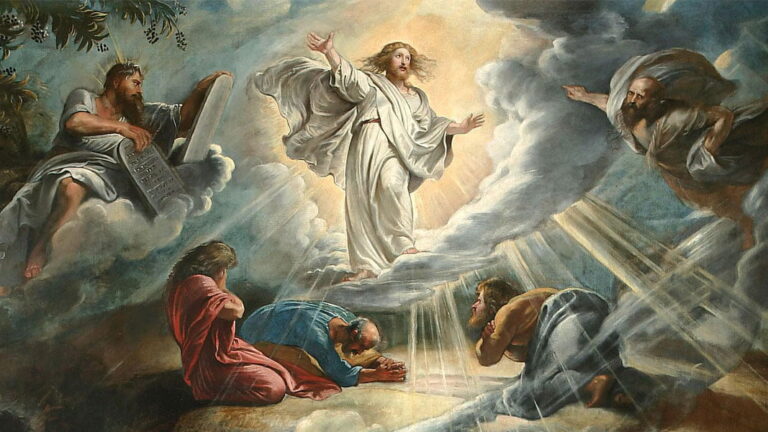 THE SIGNIFICANCE OF THE TRANSFIGURATION OF JESUS

The feast of the Transfiguration of the Lord celebrated in the East since the 5th century, has been celebrated in the West since 1457 (15th century). Situated before the announcement of Christ’s Passion and Death, the Transfiguration prepares the Apostles to understand this mystery. In the Catholic liturgical context, the Solemnity of the Transfiguration takes place twice a year. The first is on the second Sunday of Lent and the second on August 6. One of the motivations for which it is celebrated on August 6 is because of the forty days that precede the Feast of the Exaltation of the Holy Cross (September 14). According to tradition, the transfiguration event took place forty days before the crucifixion. In both, followers of Jesus Christ are called to deepen the Christian mystery of love and to strengthen their faithfulness to God. In celebrating the Transfiguration of the Lord, the Church recalls the episode of the transfiguration narrated in the Gospels (cf. Mt 17:1-9; Mk 9:2-10; Lk 9:28-36) and also through an allusion contained in the Second Letter of St. Peter (1:16-18), proposed by the liturgical form as a reading of the book of the prophet Daniel (7-9-10.13-14).

The prophet Daniel, in the first reading prepares us for the understanding of the Transfiguration of Jesus through the biblical literary form of the apocalyptic vision, which, thanks to the knowledge of the history of the Gospel, we can understand the prophecy in a Christological way. In his vision of the night, Daniel speaks of One of Great Age of a “snow-white robe” and hair “white as wool,” sitting on His throne which was a blaze of flames and wheels of a burning fire, around which the heavenly court is at his service. These are presented with a person who arrived with the clouds of heaven, “like a Son of man,” who is given eternal power, glory and his kingdom that will remain forever. This prophecy is in a Christological key because we read the expression “Son of man” in reference to Jesus, true God and true man (Son of Man and Son of God). Jesus Christ himself used the name “Son of man” to help listeners reflect on his person and mission. In a nexus, it becomes interesting to recall that during the trial before Pilate, Jesus declares himself the Son of Man coming on the clouds of heaven, and for this reason, he was accused of blasphemy, which will lead him to the ignominious death of the cross.

In Peter’s apostolic letter (2Pt 1:16-19), an alternative reading for today, we can hear his testimony as a first-hand witness, which becomes for us the hope of what awaits us in eternal life, when we will be like him, as He is, all shining with light.

When we juxtapose today’s Matthean narrative with the Markan transfiguration text (Mk 9:2-10), we would understand better the context that precedes the passion of Jesus, who, before going up to the last hour of Galilee to Jerusalem, gathered with his beloved disciples, Peter, James and John, to take them to a high mountain: the tradition of the Church identifies it as Mount Tabor. Here, Jesus was transfigured before his face and his clothes became shiny and white so that no washerwoman could do the same. At this prodigious event, Moses and Elijah (the Law and the Prophets) appeared talking to Jesus. In the face of all this, Peter turned to Jesus to express his admiration and his fear for what he and the other two disciples had seen and in which they were participating. A cloud descended (a symbol of the divine presence like that which accompanies the Jews – cf. Exodus 16:16), which enveloped them with their shadow, from which came a voice: “This is my beloved Son: listen to him!”, repeating what God the Father had already revealed at the time of Jesus’ baptism in the Jordan, the first theophany of the Trinity. “Beloved Son” is one of the most important Christological titles, inspired by (Isaiah 42:1), where the term means the “Servant of Yahweh,” while the invitation: “listen,” recalls (Deuteronomy 18:15), where Moses announces the coming of the ‘end-time’ prophet to which the people must listen. That voice and the shadow of the cloud cast the disciples in great fear, in order to prostrate them to the ground. But when the disciples looked around, they saw only Jesus. This presence, which is the only essential, is the most important thing to be found at the end of a great experience. As they descended the mountain, Jesus ordered them not to tell anyone about the theophanic experience they had, until after the Son of Man had risen from the dead, which they did not understand.

Having said these, what message does the transfiguration bring to our doorstep and how could it be applied to our spiritual lives?

Jesus was transfigured in the eyes of his disciples, and even the eyes of the disciples were transfigured (metamorphosized), in the sense of a transformation of their ability to see, to contemplate, to be able to find in Christ the glory of God through the Holy Spirit (“mystical enlightenment,” as stated at the beginning of this reflection). These disciples are those who participated in particular moments in Jesus’ life: healing, preaching and then passion. It is precisely to strengthen their faith, in view of the scandal of the cross, that Jesus chose them because of the humiliation of facing death and being disfigured by the pain on the cross, they can then remember having contemplated nature of Jesus, even for a moment, in order to believe beyond death that seems to annihilate life. Thus, the Transfiguration is a support for the faith in order to sustain the weakness of its apostles, a gradual help in the face of the mystery of Christ until Easter. It is a flash of light from the Kingdom of God that is Christ Himself, the light of Easter and Pentecost, the time of the Transfiguration of the world. If Moses and Elijah represent the Old Covenant – those who were chosen to meet God on behalf of the people, Peter and the two brothers James and John become participants in the New Covenant, those who will bring the message of God’s love through Jesus Christ, the New Covenant.

Dear friends in Christ, we can see the transfiguration as an open window on the divinity of Jesus, the participation in its intra-Trinitarian essence, or at least the manifestation that is experienced by us for what He is within the Trinity. This is the life that the Son always lived before the world was, a life assumed in the body of flesh that Jesus was born of Mary, and hides during his earthly life. It is, therefore, an anticipation of what we will be when we are glorified in the resurrection, what we will be when Christ transforms our mortal body and makes it similar to his glorious body, to participate in the beauty of God.

In our daily journey we are gradually metamorphosized by the action of the Spirit of Christ, who, through the sacraments, especially the Eucharist, the perfect presence of Jesus Christ transfigured in the bread and wine which, through transubstantiation, become his Body and Blood for the remission of sins and for our salvation. The transfigured Jesus is already what the Christian is called to become through baptism and consequently his/her vocation and mission in the world.

Above all, the Christian life is understood as a historical process of real transformation in Christ, to paraphrase the preface proper to this solemnity, which revealed its glory both to prepare its disciples to endure “the scandal of the cross” and to anticipate the splendid destiny of the Church to throughout its history. Thus, the transfiguration is a lesson of faith for us too, and it is also a lesson of hope when the proclamation of passion and death approaches when sadness and suffering come into our existence and we are able to Transfigure with Jesus Christ and be enlightened.