REFLECTION/HOMILY FOR THE FEAST OF THE CHAIR OF SAINT PETER, FEBRUARY 22, 2019 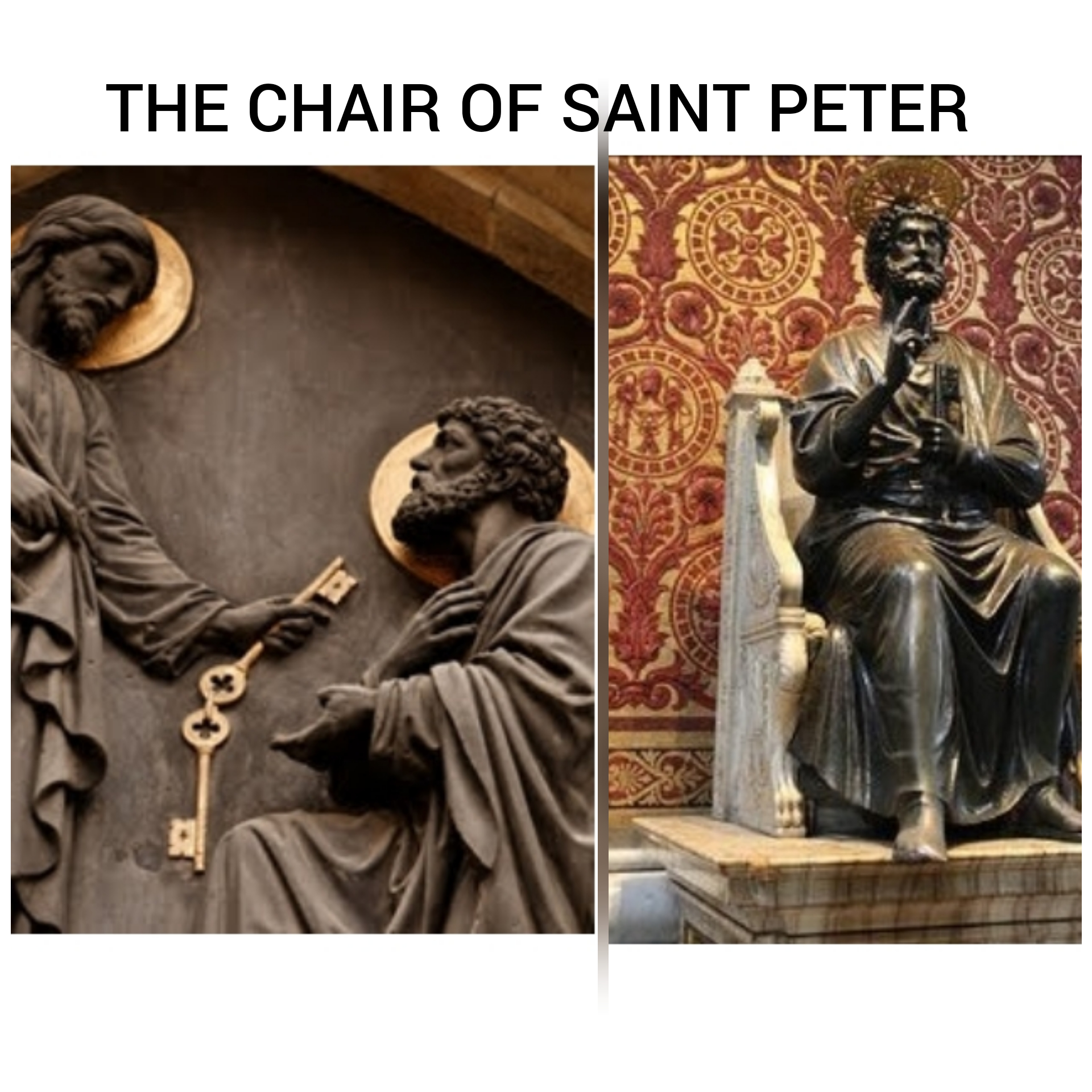 (FEAST OF THE CHAIR OF SAINT PETER)

“Chair” as a concept, has been understood through the ages as the symbol of authority and power. The power of kings or top executive leaders is reflected in their seating. In those days, sitting was not for reasons of comfort, but to convey authority. The word “chairman” springs from this idea; this is so because, he is the executive leader and chief of a particular group/sect/organization; thus, occupying the “chair,” demonstrates his position of authority. In the scriptural context, this idea reflects itself. Our Lord referred to the “chair of Moses” as a way of criticizing the religious leaders of his time for their hypocrisy, who were the occupants of that “seat”.  According to Jesus, the scribes and Pharisees occupy “Moses’ seat” (Matt. 23:2), having the authority and ability to interpret the Law of Moses correctly; put differently, because they had the authority (based on the position of occupying Moses’ seat); thus, they ought to be obeyed. However, because of their hypocrisy, Christ admonished that they should not be imitated. Here, it is pertinent to note that “seat” is both a metaphor for judicial authority and a reference to a literal chair. Besides, in Exodus 18:13, we are told that “Moses took his ‘seat’ to administer justice for his people, while the people stood around him”. Technically, we can say that the “chair of Moses” signifies the place of authority that the Scribes and Pharisees had in interpreting the Law and exercising their authority over the Jewish people. Put differently, it is the teaching office and authority (magisterium) of the Torah, traceable to Moses, the immediate recipient of the Law.

Holy Mother Church celebrates today, the feast of the “Chair of Saint Peter”. In consonance with the preceding, we can say that the “Chair of St Peter” is a metaphor for the Petrine ministry or the service the Pope offers as an authoritative leader of the Church. In the Gospel according to Matthew, Christ is understood as the “New Moses”; ‘who has come not to abolish the Law, but to fulfil it’ (Matt. 5:17). In Jesus lies ‘all authority in heaven and on earth’ (Mat 28:18); however, he gave this authority to Peter, as we see in today’s Gospel Reading (cf. Matt. 16:13-19): “…So I now say to you: You are Peter and on this rock I will build my Church. And the gates of the underworld can never hold out against it. I will give you the keys of the kingdom of heaven: whatever you bind on earth shall be considered bound in heaven; whatever you loose on earth shall be considered loosed in heaven.” In saying this, Jesus made St. Peter the head of the entire community of believers and placed the spiritual guidance of the faithful in St. Peter’s hands. This feast (celebrated in the Church as far back as the fourth century) brings to mind the mission of teacher and pastor conferred by Christ on Peter (also see John 21:15-17) and continued in an unbroken line down to the present Pope.

Dear friends in Christ, as we celebrate the unity of the Church, founded upon the Apostle, we renew our assent to the Magisterium of the Supreme Pontiff, extended both to truths, which are solemnly defined “ex-cathedra”, and to all the acts of the ordinary Magisterium. And so, we pray for the Holy Catholic Church, for the intentions of our holy father, Pope Francis in collegiality with all the bishops, that they may be faithful ‘stewards’ and ‘shepherds of the flock of God entrusted to their care’, as St. Peter advised in the First Reading (1 Peter 5:1-4). Peter continues: ‘never be a dictator over any group that is put in your charge.’ As they shepherd the people of God, may they continually imitate the Lord, the ideal Shepherd as seen in the Responsorial Psalm {Psalm 22(23)}, who leads and revives his flock near the restful ‘waters of baptism’, preparing a ‘banquet (table) of the Eucharist’, and ‘anointing with the sacramental oil’.