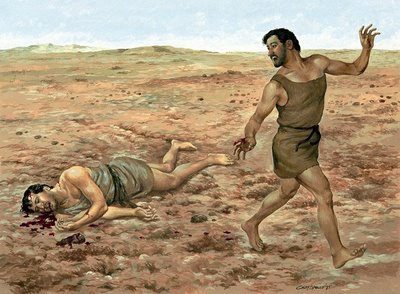 The evil act of Cain in today’s Frist Reading (cf. Gen. 4:1-15,25), depicts how sin rattles the relationship and bond between brothers. This is a kind of life outside the garden (paradise), rooted in sin – characterized by bitterness, envy, anger, murder, death etc. Cain, being envious of his brother’s progress (how God favoured and accepted Abel’s offering and rejected his), decided to kill him. In this light, Cain was depicted as a hardened sinner whose offence was more perverse than Adam and Eve; thus, becoming the first fugitive.

In the same vein, the Pharisees of today’s Gospel reading (cf. Mark 8:11-13), with envy and hatred in their hearts, and being already aware of the progress made by Christ their own Jewish brother –the feeding of the multitudes (which occurred twice – cf. Mk 6:34-46 & Mk 8:1-10), delivering the Syro-Phoenician’s daughter from an evil spirit (cf. Mk 7:24-31), the healing of the man who was deaf and dumb (cf. Mk 7:31-37), they still went ahead to demand for a sign from him as a way of authenticating his ministry, and possibly to entrap and eventually kill him. Knowing their hearts, Jesus refused their request and not finding a fertile ground for his message there, he retired by boat to another place, in search of people with better dispositions. (Much later in this same chapter, Christ will prophesy his passion and death at the hands of the authorities who were envious of him).

Dear friends in Christ, how often do you allow your anger, envy, lies, bitterness, hatred, falsehood, etc. to rattle or kill the relationship between you and your brothers/sisters in Christ, just because of their progress and the favours bestowed upon them? Or as the Psalmist {Ps. 49(50):1,8,16-17,20-21} puts it, do you ‘recite the commandment of God on your lips while you sit and slander your own brother/sister’? Today, God offers us an opportunity for repentance. Even after he killed Abel, Cain was not beyond God’s love and mercy; God marked his forehead as a sign of divine protection from potential enemies. Therefore, in the spirit of repentance, we are called to “pay our sacrifice of thanksgiving to God” with a heart of joy and gratitude.