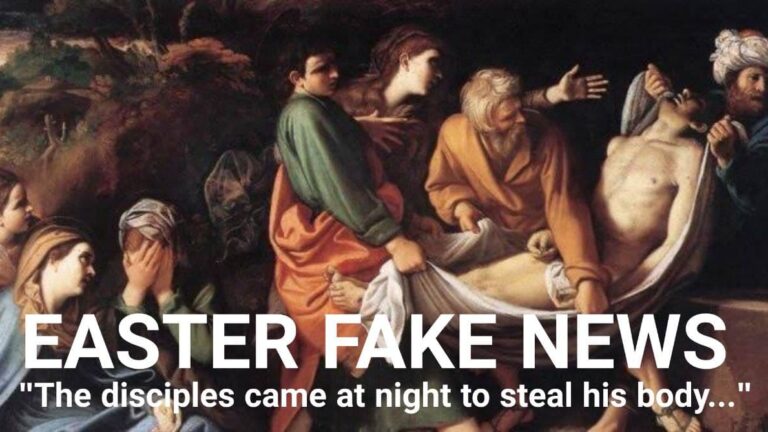 “THE RESURRECTION OF JESUS BECAME A “FAKE NEWS” FOR THE “JEWS”; HOW DO YOU HANDLE THE FAKE NEWS TOLD ABOUT YOU?”

The term “fake news” has emerged lately as a catch-all phrase to refer to everything from news articles that are factually incorrect to opinion pieces, parodies and sarcasm, hoaxes, rumours, memes, and factual misstatements by public figures that are reported in otherwise accurate news pieces, or articles that are intentionally and verifiably false, and could mislead the audience. Fake news can be said to be as old as the society itself. Apparently, fake news can seem so believable that people have a hard time determining the truth. Sadly, this played out in the event of Christ’s resurrection as recorded in the Holy Book.

It is quite surprising that while the event of Christ’s resurrection brought happiness and joy to his followers, some of the guards went off into the city to connive with the chief priests in order to spread “fake news” among the people that the body of Jesus was stolen by his disciples while they were asleep on duty (guarding the tomb). Matthew the evangelist records in today’s gospel reading, that “the soldiers took the money and carried out their instructions, and to this day that is the story among the Jews.” (cf. Matthew 28:15).

Unfortunately, the devil still employs some persons to spread fake news concerning our Easter celebration today. Today, we see various memes debunking the celebration of Easter and rendering it a pagan celebration of the worship of a Mesopotamian goddess called Ishtar etc. The unfortunate aspect of these criticisms lies in the fact that the word Easter is actually an English word, which sprung from German roots; thus, only a person whose native language is English, or perhaps German, would even advance this kind of argument. Therefore, anyone making this charge shows a total lack of comprehension of global Christianity. It must be understood that “Pesach” or “Passover” as it is biblically known is the original word for Easter. This translates itself into Greek as “Pascha”, and in the Latin Septuagint a “Pascha”. From there it passed into the Romance languages, and so in Spanish, it is Pascua, in Italian, it is Pasqua, in French it is Paques, and in Portuguese it is Páscoa. On the other hand, the English term Easter illustrates the significance of the Lord’s resurrection. The term relates to the “East,” the direction of the Rising Sun, which signifies “rebirth” or “New Life” of the resurrection. Several times, the Scripture has often referred to Christ as the Sun of justice, rising from the east. Does this remind us of Zachariah’s prophecy in relation to Christ – “through the loving mercy of our God, the rising Sun has come to visit us”? (Luke 1:78). A reference to the Lord Jesus Christ coming as the Rising Sun is found in the last chapter of Malachi. With this, the Lord Jesus Christ is referred to as the rising Sun of righteousness… (cf. Malachi 4:1-3). Therefore, this symbolism of Easter (as the sun, which had its birth in the East and brought new life upon earth) has a supernatural meaning to the new life of the Risen Christ, the eternal and uncreated Light.

Dear friends in Christ, how do you handle or react to the fake news told about you? You are about celebrating your success, and suddenly, a strange story emanates from somewhere claiming that your success was achieved via dubious means, such that the truth about you becomes very difficult to believe; how do you face such reality? The fake news spread about Jesus’ resurrection was so dark that the disbelief was stronger in the hearts of the Jews and even among Jesus’ followers. The first reading (Acts 2:14,22-33) from the book of the Acts of the Apostles mirror out Peter’s defence of the resurrection; debunking the fake news that was already on at that time by taking them through the prophecies of the Old Testament.

Dear friends in Christ, did you notice that the Apostles didn’t even dwell on the fake news; they ignored it, upheld the truth of Jesus’s resurrection, which practically debunked the fake news. This reality was mirrored out in the first reading (Acts 2:14,22-33) which narrates Peter’s defence of the resurrection; debunking the fake news that was already on at that time by taking them through the prophecies of the Old Testament. Thus, when faced with fake news, our prayers should be like that of the Psalmist “Keep me safe, O God; you are my hope…Preserve me, God, I take refuge in you. I say to the Lord: ‘You are my God. O Lord, it is you who are my portion and cup; it is you yourself who are my prize.’”