REFLECTION FOR TUESDAY OF THE FOURTH WEEK OF EASTER 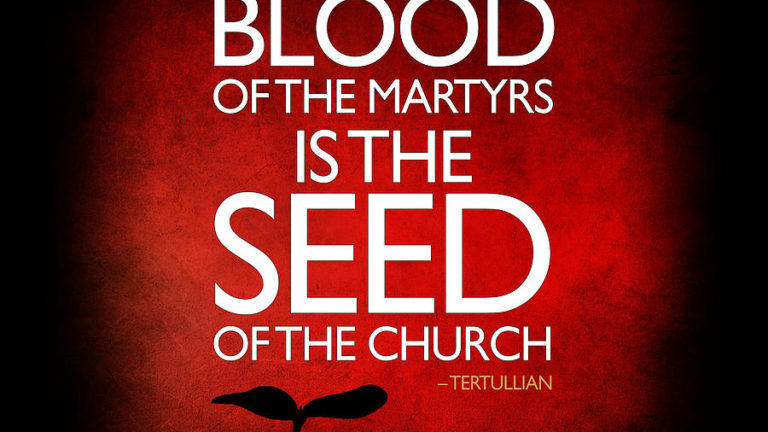 We are quite familiar with the popular expression of Tertullian (197 A.D): “The blood of martyrs is the seed of the Church”. Tertullian saw that the Church grow stronger and powerful after the death of martyrs. He saw how the blood of murdered martyrs planted the seeds that grew the faith. This conviction of the early Christians was based on Christ’s redeeming death, Jesus said: “unless a grain of wheat falls to the ground and dies, it remains only a single grain; but if it dies, it yields a rich harvest” (John 12:24). The martyrs simply follow the path shown by Jesus, who speaking of Himself said: “I am the way, and the truth and the life” (John 14, 6).

The sentiment of the foregoing is not unconnected with today’s First Reading (cf. Acts. 11:19-26) which demonstrates how persecution in the early Church caused Christianity to grow. We were told that the believers spread to places such as Phoenicia, Cyprus and Antioch, leading to the conversion of many including the gentiles. Here, we continue to see the inclusion of the foreign nations (pagans) into God’s project of (universal) salvation, which began with the Church in Jerusalem. Little wonder today’s Psalmist [cf. Psalm 86(87)] calls the nations (pagans) to praise the Lord, “O praise the Lord, all you nations!” The second stanza of the Psalm demonstrates this apparently: “Babylon and Egypt I will count among those who know me; Philistia, Tyre, Ethiopia, these will be her children and Zion shall be called ‘Mother’ for all shall be her children.” Here, foreign nations are here described as actually incorporated and enrolled, by new birth, among the sons of Jerusalem. Thus, God has gathered into his commonwealth all the kingdoms of the earth. He has made men one, members of the same family, by teaching them to feel that they are all children of the same Father. He has made it evident that the hope of the Psalmist is no false hope; that there is a Father in heaven who cares for all, irrespective of our tribes and languages. Thus, the Psalm has received a better and higher fulfilment than that which lies on the surface of its words. It was fulfilled in Christ.

Recalling part of yesterday’s gospel reading where Jesus said: “And there are other sheep I have that are not of this fold, and these I have to lead as well. They too will listen to my voice, and there will be only one flock and one shepherd” (Jn. 10:16); thus, today’s First reading and Responsorial Psalm come to make a deeper meaning explaining clearly that salvation is not for the Jews alone nor a particular group of people, but for the whole human race. That is why in today’s Gospel Reading (cf. Jn. 10:22-30), Jesus reprimands the Jews in Jerusalem for not believing in him, saying:  “…because you are no sheep of mine. The sheep that belong to me listen to my voice; I know them and they follow me. I give them eternal life; they will never be lost and no one will ever steal them from me. The Father who gave them to me is greater than anyone, and no one can steal from the Father. Who are these sheep other than the whole human race who Christ is including in the universal project of God?

And so, my dear friends in Christ, we are indeed privileged to be included in God’s plan of salvation. We are called to continue to adhere to the voice of Christ, the one true Shepherd of our souls, and bear witnesses to him even in the face of the present-day difficulties, challenges, persecutions, pain, plagues, diseases, famine, etc., just as the early Christians did. These difficulties should not extinguish our faith but should serve as the seeds for the growth of the Church and Christianity at large.