REFLECTION FOR PENTECOST SUNDAY: “THE HOLY SPIRIT (DIVINE CATALYST); IN WHOM WE LIVE AND MOVE AND HAVE OUR BEING” 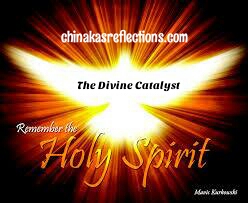 Dearest friends in Christ, the Holy Spirit comes to us as a gift to instruct and transform us into what God wants us to be, but it remains unchanged in itself. In a world of disunity and tension of the opposites, the Divine Catalyst (Holy Spirit) should enable us to foster unity and become instruments of peace, recognizing the talents/gifts in the life of every individual. The Holy Spirit is the best gift of God to humanity. We are called to utilize the many gifts of the Spirit in service, and foster unity. Just as Paul puts it in the Second Reading – his first letter to the Corinthians (1 COR 12:3B-7, 12-13): “There are different kinds of spiritual gifts but the same Spirit; there are different forms of service but the same Lord; there are different workings but the same God who produces all of them in everyone. To each individual, the manifestation of the Spirit is given for some benefit. Therefore, it is apparent that our world today needs the continuing effect of the Divine Catalyst in order to create a just world (utopia) – for it is in Him we live and move and have our being (ACTS 17:28).
May the Divine Catalyst (The Holy Spirit) continually be the inspiration behind all our aspirations and deeds.
SHALOM!