REFLECTION FOR MONDAY OF THE SEVENTH WEEK OF EASTER 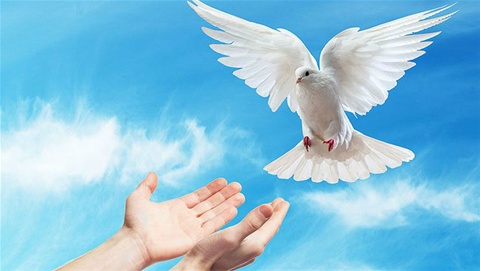 OUR HUMAN FRAGILITY AND THE NECESSITY OF THE HOLY SPIRIT

During my early formative years as a “religious seminarian” in Nigeria, I met a sister, Jane (not her real name) who appeared to be a “prayer warrior.” Those who talked about her testified to her zealousness to the things of God and Church activities – daily participation at every Eucharistic celebration, prayed her rosary daily, wore the scapular, rosary, and other religious medals at the same time; in fact, she led an exemplary life. Sister Jane was the kind that could make one aver of the possibility of a lay Catholic being more Catholic than the Pope. While on “Apostolic Work” experience, she used to advise me to hold and love the Catholic faith tenaciously and not lose it. At a point, she even boasted that her knowledge of God was so vast and with the kind of life she is living, whenever the trumpet shall sound, she would surely make heaven. In late 2014, sister Jane got married, then I was already in Brazil to complete the second phase of my formation to the priesthood as a student of theology. Unfortunately, after 3 years of marital challenges and difficulties with her husband and his family, coupled with the medical report of her inability to conceive, sister Jane suddenly left the Catholic Church and joined one of the new generation (self-acclaimed) Pentecostals who promised her miracles. She consequently divorced her husband, remarried to another man and moved on with her newfound faith. When I heard her story and all that had happened to her, I decided to pay her a visit during my 2017 holidays as a deacon in Lagos. From our conversation, I discovered that she was already a ‘thousand miles’ away from the Catholic faith. Despite the fact that I tried talking her back to the Catholic faith, reminding her of all the advice she gave me earlier, my efforts proved abortive. For sister Jane, the Catholic Church now belongs to the antichrist, practising false doctrines. Funny enough, she even tried convincing me to also abandon my Catholic faith and vocation and become an evangelist in their “mushroom fellowship centre,” because they were in need of ministers. Sad! As at the time of writing this reflection, sister Jane is still a non-Catholic, childless in her second marriage, and apparently unhappy.

For most of us, this is quite an unfortunate story. To others, sister Jane may probably have some mental disorders or a spiritual problem. Nevertheless, this sister can be said to be a microcosm of all of us whenever we abandon Christ by our sins, lacking the instruction of the Holy Spirit. This summarizes the message of today.

In today’s gospel, the apostles were convinced that they understood Jesus and what He had told them. Like sister Jane, the disciples spoke with great confidence about their understanding of Jesus and their relationship with him, ‘Now you are speaking plainly (…) we believe that you came from God’. Jesus had to puncture their self-confidence, declaring that in a very short time, they will desert him, leaving him alone, and each going their own way. In other words, Jesus told them the blunt truth, making them realize the illusion they had fallen into, and that their faith was still very fragile.

Dear friends in Christ, when faith relies on human security, it cannot stand trial. When it comes to our relationship with the Lord, we are all learners like Jesus’ disciples who abandoned him during his arrest, trial, and persecution; we are all learners like the Christians who encountered Paul in Ephesus as illustrated in today’s first reading, stating plainly that they “were never told there was such a thing as a Holy Spirit.” It means that there is so much more to discover about the Lord and his relationship with us and ours with him. Unlike those believers in Ephesus, we have been told about the Holy Spirit, the Spirit who proceeds from the Father and the Son; and have received Him through the Sacraments of Christian initiation. We still get renewed by the Spirit when we approximate the Sacraments and invoke Him at prayers. Nevertheless, inasmuch as we have received the Holy Spirit, and already believed in Christ, we must make efforts to cooperate with the graces the Holy Spirit offers daily by growing in faith and discovering more about Jesus in order to stand firm during trials and challenges; otherwise, we would fall out and abandon the Lord when the “spiritual waves” hit us. Therefore, we always need new gifts from the Spirit, which reveal to us the superficiality of our adherence to Christ in the previous phases and the need to face new tribulations and to receive new graces that will make us grow in intimacy and union with Him. However, when we fail to cooperate with the grace of the Holy Spirit and feel complacent with our spiritual lives, then, we will end up grieving the Holy Spirit and ‘abandoning the faith,’ in the time of trials just like the anonymous sister (Jane) referenced above.

As we continue with the novena to the Holy Spirit in preparation for Pentecost, may we continue to be instructed, inspired, illumined and renewed in His saving grace, and come to a better understanding of our Lord Jesus Christ. Amen